We invite all Palestinian community organizations, Palestine solidarity groups and movements and campaigns for social justice to endorse this call to action! Samidoun Network is releasing the following call to action for August 7-9, 2020 to build on all of the committed organizing taken up by so many organizations and activists around the world on and around July 1 and the Day of Rage against Israeli annexation. Annexation is a continuing threat – especially if the Israeli state thinks that it can pass unnoticed without continued resistance. The struggle is not over; in many ways, it has just begun. We urge you to continue mobilizing to defend the land and people of Palestine and join us in the Days of Resistance, August 7-9. 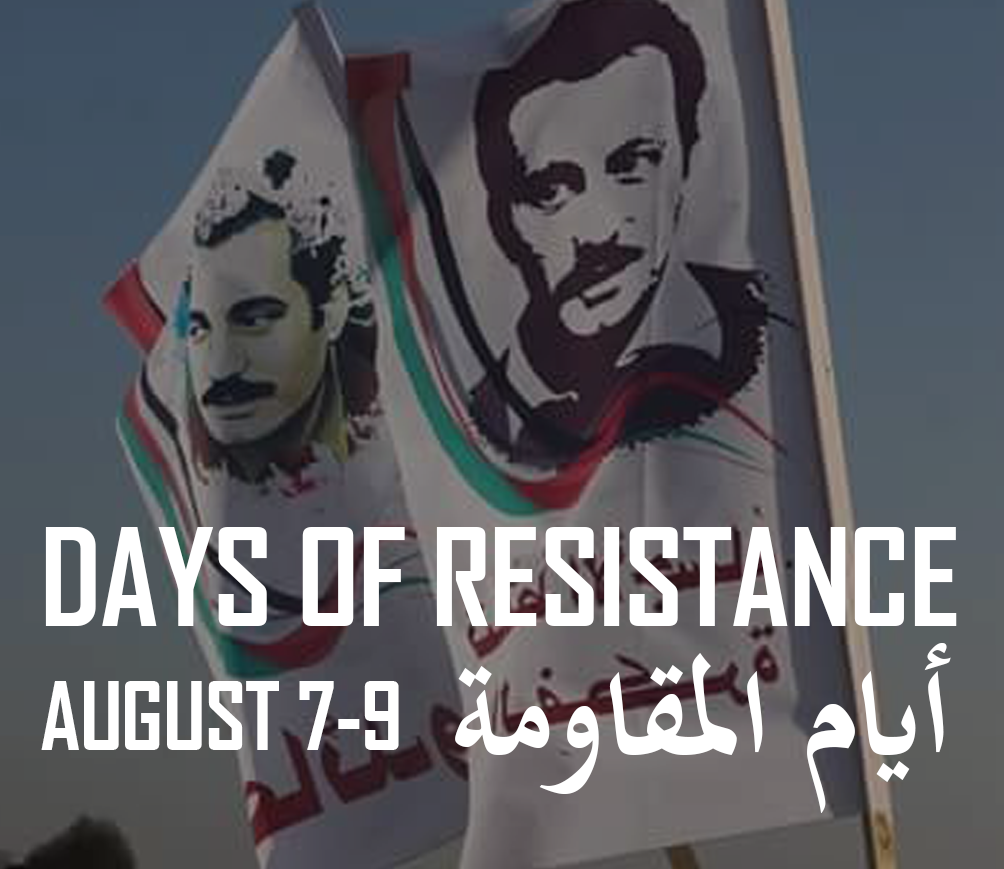 Statement from the Samidoun Network

On the 48th anniversary of the assassination of Ghassan Kanafani, Palestinian revolutionary writer whose life was taken by the Israeli Mossad through a car bomb near his Beirut house on 8 July 1972

“Imperialism has laid its body over the world, the head in Eastern Asia, the heart in the Middle East, its arteries reaching Africa and Latin America. Wherever you strike it, you damage it, and you serve the world revolution…The Palestinian cause is not a cause for Palestinians only, but a cause for every revolutionary, wherever he is, as a cause of the exploited and oppressed masses in our era.” – Ghassan Kanafani

A call to the Palestinian people and all those who stand for justice:

On the 48th anniversary of the assassination of the struggler, writer and revolutionary Ghassan Kanafani, Samidoun Palestinian Prisoner Solidarity Network salutes in his memory all of the martyrs of the Palestinian people, the women, men, children and elders whose lives have been taken in the assault of Zionist colonialism that targeted Palestine and the entire Arab region.

Today, the program of Israeli annexation continues to threaten Palestinians in the West Bank, including the most fertile agricultural land of the Jordan Valley, which is still slated for Israel’s latest land grab. Of course, this is simply the continuation of over 72 years of land theft, dispossession, apartheid and genocide – but it requires continued mobilization and action to confront, alongside the siege on Gaza, the mass imprisonment of Palestinians, the demolition of homes, the denial of Palestinian refugees’ right to return and further war crimes and crimes against humanity.

On this occasion, we salute all of the victims of Zionist colonization and we rededicate ourselves to struggle for everything Ghassan Kanafani lived and fought for: the liberation of Palestine and the liberation of humanity. The memory of his martyrdom is a Palestinian, Arab and international rallying cry for revolutionary change.

In this context, we call on all Palestinian communities and those who stand for justice in Palestine to join together to organize the Days of Resistance on August 7, 8 and 9, 2020. We urge all Palestinians inside and outside Palestine, and all of the national forces, popular institutions, youth, student and women’s movements, social justice movements and solidarity organizations to participate actively in “banging on the walls of the tank” – as in Kanafani’s Men in the Sun – to break down the walls of silence. Join in marches, popular activities, demonstrations and remind the world that the Palestinian people will continue to rise and confront all attempts of liquidation and destruction of the cause of Palestine and resist dispossession, exile and genocide – and that all people of conscience stand beside the Palestinian people in this critical moment.

Samidoun Network in occupied Palestine and in the diaspora urges all to consider the days of Friday, Saturday and Sunday, 7 through 9 August, as days of comprehensive struggle, resistance and popular organizing against Zionist colonization throughout occupied Palestine, days of organizing demonstrations and political, cultural and media activities throughout Palestine, in exile and diaspora and everywhere around the world. These actions confront the ongoing Israeli crimes against the Palestinian people, including the Zionist “annexation” project and the deadly siege on Gaza, and aim to strengthen international solidarity with the Palestinian struggle and with the Palestinian prisoners’ movement inside Israeli occupation jails.

On this anniversary, Samidoun extends its warmest salutes of struggle to all of those who initiated and participated in the Palestinian Day of Rage and its activities on 1 July and the surrounding days throughout Palestine and internationally, and we thank all of the Palestinian and progressive media institutions that covered these actions confronting the Zionist “annexation” and colonization project that aims to plunder Palestinian land and resources. This project only underlines the expansionist, settler colonial, racist nature of the Israeli state and its continuing colonization and theft of Palestinian and Arab land for over 72 years, a central part of the imperialist assault on the entire region.

It must inspire us to mobilize and organize –  as Kanafani so clearly expressed –  to confront imperialism, Zionism and the reactionary regimes that continue to collaborate with these forces of oppression, and to struggle for liberation. Every victory of the peoples in struggle against these forces is a victory for Palestine and for our collective victory.

Salutes to the martyrs, freedom for the prisoners and return for the refugees. Victory, liberation and return will come for the struggling Palestinian people!