Samidoun Palestinian Prisoner Solidarity Network is republishing the following report below from Inminds Human Rights Group on a London vigil in solidarity with the Humboldt 3 and against anti-Palestinian repression in Germany. Samidoun joined many other groups in co-signing the letter delivered to the German Embassy during the vigil. 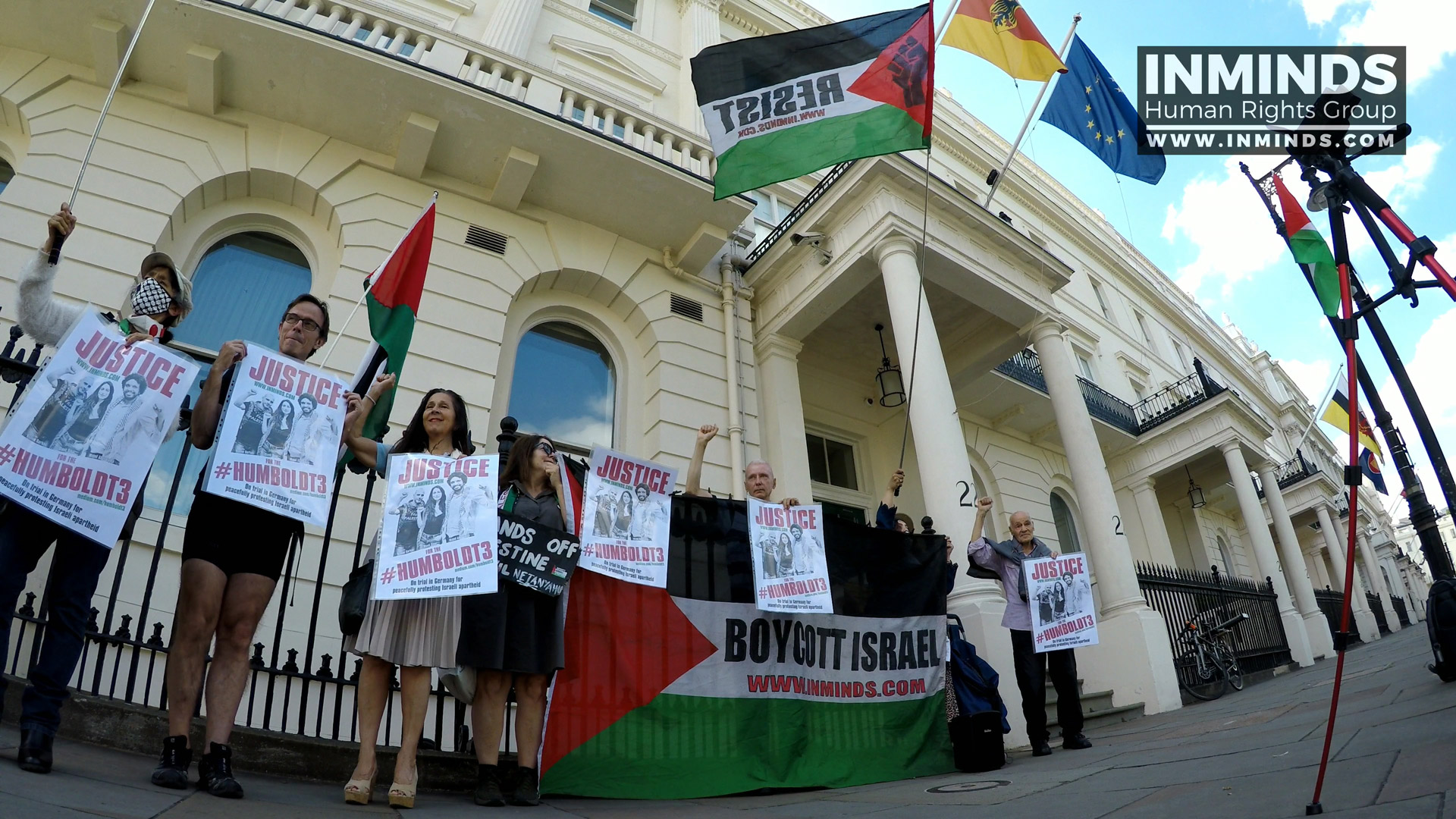 The Humboldt 3 – Ronnie Barkan, Majed Abusalama and Stavit Sinai, a Palestinian from Gaza and two Israeli Jewish activists – were charged after they interrupted a Knesset member in 2017 about the massacre of civilians in Gaza during a speech at the Humboldt University of Berlin. The next trial in their case will take place at the Moabit Court in Berlin at 9 am on Monday, 3 August.

Supporters of the Humboldt 3 and defenders of the right to stand for justice in Palestine will gather outside the Moabit court at 8 am on 3 August. Samidoun Palestinian Prisoner Solidarity Network supports this mobilization and encourages all to join in Berlin as well as to organize actions like this one in Paris, by delivering letters and holding protests outside German embassies and consulates around the world.

The trial of the Humboldt 3, like the political ban and exclusion imposed on Khaled Barakat, the anti-BDS resolution passed by the Bundestag that seeks to classify opposition to Israel, Zionism and even Israeli policy as “anti-Semitic,” the closure of bank accounts for organizations like Jewish Voices for a Just Peace, the deportation and silencing of Rasmea Odeh and the exclusion of international artists for their support for Palestinian rights, highlights the level of anti-Palestinian repression taking place in Germany.

On 17th July 2020, Inminds Human Rights Group held a vigil outside the German Embassy in London, in solidarity with three BDS activists, the Humboldt 3, that are on trial in Germany.

The three defendants are:

They are being accused of interrupting a propaganda speech by Mrs Aliza Lavie, a representative of the Israeli government, at Humboldt University in Berlin on June 20, 2017.

Mrs Aliza Lavie, as a member of the Foreign Affairs Committee of the Israeli Parliament, directly oversaw the 2014 attack on besieged Gaza that resulted in 2200 Palestinians being slaughtered, including 551 babies and children. She bears a direct responsibility for what Amnesty International has described as war crimes committed in Gaza.

Rather than arrest Lavie as a war criminal, she was given an unchallenged platform by Humboldt University to promote her propaganda, whitewashing Israeli crimes against humanity. When the three activists in the audience challenged her propaganda by quoting from the United Nations ESCWA report which accuses Israel of practicing The Crime of Apartheid, defined by the Rome Statute of the International Criminal Court as a Crime Against Humanity, they were attacked and thrown out, and later charged.

“We stand here today in solidariy with our comrades in Germany who are being persecuted by the state for speaking truth to power.

Everything about this trial is Orwellian. A war criminal isn’t arrested, but is given the red carpet platform to spew propaganda and lies, whilst truth speakers are silenced.

Their only ‘crime’ is to dare expose Israeli Crimes Against Humanity. The German state is so supine to Israeli blackmail over fake accusations of antisemitism that it will bend over backwards to appease the apartheid regime.

It seems Germany has learnt nothing from its own history of the dangers of turning a blind eye to Crimes Against Humanity and where this leads. A truly shameful state of affairs.”

During the vigil a letter addressed to the German Ambassador, condemning the German states prosecution of the Humboldt 3, was delivered to the embassy. A cross-section of civil society organisations, ranging from human rights groups to religious groups – both Muslim and Jewish; to academic and journalism rights groups; along with Palestinian solidarity groups, were signatories to the letter.

The trial on the Humboldt 3 starts on 3rd August at Moabit Court in Berlin.

To find out the latest about the case:
https://medium.com/humboldt3