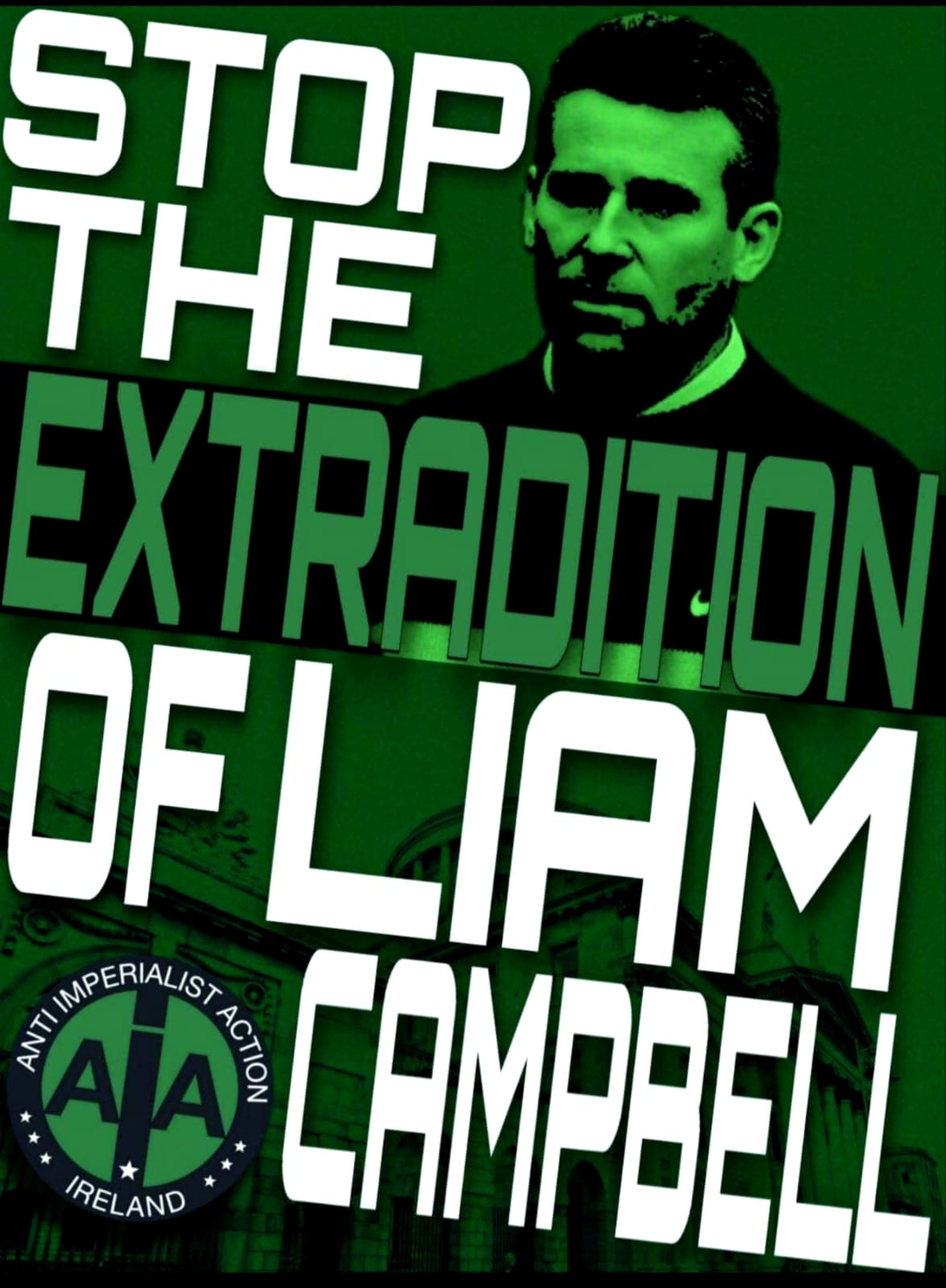 Samidoun Palestinian Prisoner Solidarity Network joins the campaign against the extradition of Irish Republican Liam Campbell! His extradition from Ireland to Lithuania is being pursued at the behest of the British government that continues to occupy the north of Ireland, despite the fact that Liam Campbell has never set foot in Lithuania.

Liam Campbell was arrested in 2009 and issued his first extradition warrant; he was held in solitary confinement in the notorious Maghaberry Prison in Belfast for four years, until he won his case in the High Court in March 2013 and defeated the British appeal to the supreme Court in London in August 2013.

He was arrested once again in 2016 on the basis of a second European Arrest Warrant, accusing him of vague charges of “preparing to smuggle” arms to Irish Republican organizations. The pursuit of Liam Campbell over more than 10 years – without a single credible criminal conviction – has indicated the commitment of the British state to pursue Irish republicans internationally for continuing to defend the rights of the Irish people.

Liam Campbell’s brother, Michael, was previously arrested and sentenced in Lithuania on similar charges, until he was acquitted in a retrial in 2015 after his defense showed that he was in fact entrapped by British intelligence agents. Liam himself was first subjected to an exclusion order barring him from entering the occupied north of Ireland in 1983.

We republish the statement below of the Campbell family, which we firmly support. As we demand the release of all Palestinian political prisoners, we also call for the release of all Irish political prisoners and an end to the practice of internment, a form of political detention that bears a deep similarity to the use of administrative detention – imprisonment without charge or trial – in Palestine. We note that it was British colonialism that first introduced administrative detention to Palestine, as it did to the north of Ireland, before it was adopted by the Zionist colonial project.

In 2017, Irish Republican political prisoners in Maghaberry prison also issued a solidarity statement to Palestinian prisoners on hunger strike, noting: “Regardless of attempts to normalise the existence of the Zionist State; it has no right to exist and therefore it has no right to oppress, imprison and torture those who legitimately resist its occupation of Palestine….Given the long history of Republican Prisoners and Hunger-Strikes in Ireland, the Palestinian prison struggle resonates particularly with us.”

On 13 July, an Irish court in Dublin granted Liam Campbell leave to appeal his extradition on a point of law, whether or not the wording of an “intention” by a foreign jurisdiction to put someone on trial was the same as putting them on trial, as noted by Anti-Imperialist Action Ireland.

On this occasion, Samidoun Palestinian Prisoner Solidarity Network emphasizes our solidarity with Liam Campbell and all Irish political prisoners who continue to confront colonialism and occupation. Stop the extradition of Liam Campbell! From Palestine to Ireland, the liberation struggle continues!

To the Lithuanian Embassy,

“We gather here today, in defiance, against the Lithuanian state and their officials, operating from Dublin, who seek to bring about a British backed attempt to force the extradition of Liam Campbell, from Ireland to Lithuania. A foreign Country, Liam Campbell was NEVER in!

Having endured successive European arrest warrants issued by the Lithuanian state, served on him by agents of the British and their free state counterparts here in Ireland, we the people demand an end to the injustices suffered daily by Liam Campbell. We come united, alongside the Campbell family to show our conviction and solidarity to STOP THE EXTRADITION OF LIAM CAMPBELL!

As far back as January 2009 Liam Campbell was arrested and issued with his first extradition warrant. Four months later, whilst on bail, he was wrongfully re-arrested by the British, who by stealth, overseen a second extradition warrant by the Lithuanian State, in May 2009.

Imprisoned in Maghaberry Prison Belfast, Liam Campbell was held in solitary confinement for four years. He was NEVER questioned, nor convicted or a crime! Liam won his case in the High Court in March 2013. It was appealed by the British in the supreme Court in London, who ruled in August 2013 there was no case to answer.

Liam Campbell was returned to his family. What Liam did not know was that, a third extradition warrant, was issued by the Lithuanian state also in August 2013 and held for 3 years, before being sent to Dublin. In December 2016, Liam Campbell was arrested for a third time which began his most recent struggle against extradition.

This is scheduled to take place by order of the High Court in Dublin on Monday 13th July 2020; 9 days from now.

We strenuously denounce all attempts to render him into the barbaric and unsanitary prison conditions as evidenced in reports made by the Committee for the prevention of torture and degrading treatment (CPT) in 2018 and consistent in there report in 2019.

Reports which detail to us the extreme prisoner on prisoner gang violence (foreign prisoners in particular are targeted), accounts of sexual assault, inhumane treatment and intimidation perpetrated by “special intervention units”, notorious within the Lithuanian prison regime of today.

Locked in pre trial detention, 24 hours a day for an unknown number of years, with restrictive access to his legal documents only partially transcribed in his native tongue, and only at the discretion of a foreign state prosecutor, hell bent on securing a corrupt conviction.

Not withstanding, that in May 2018 a European Court delivered a damning guilty verdict against Lithuanian state, otherwise known as “Camp Violet” by CIA militia, for their involvement in operating “black sites” used as torture chambers; and a litany of successive abuses which resulted in hefty convictions from the European courts and testament to their ingrained flagrant denial of fair trial rights and failure to safeguard the right of citizens, including our own Irish citizens who have suffered extensively in the hands of this Lithuanian state.

Lithuania, we call you out on your states abuse of process that would prevent repatriation to Ireland for Liam Campbell, in your denial of rights as set out in the United nations declaration on human rights act (UDHR) in the charter of fundamental rights (1998). They are not rights for good behaviour but alienable entitlements to all people.

We hereby declare our full support and determination to STOP THE EXTRADITION OF LIAM CAMPBELL and call for an end, to an 11.5 year long witch hunt of our country man.

Our determination will not waver!