Home International Prisoner Solidarity Being a revolutionary is not a crime: Communists from Turkey persecuted in...

On Tuesday, 28 July, 10 Turkish communists were convicted in a German court as large crowds of over 500 people demonstrated outside to express strong solidarity with the activists, accused of supporting the TKP/ML (Turkish Communist Party – Marxist-Leninist.) While the TKP/ML is labeled a “terrorist” organization by the Turkish state, it is not banned in Germany. Nevertheless, these 10 activists were put on trial for their alleged support for TKP/ML and communist principles as supporters declared: “Being a revolutionary is not a crime!”

Samidoun Palestinian Prisoner Solidarity Network was one of dozens of organizations that endorsed the protest outside the Munich court organized by ATIK, the Confederation of Workers from Turkey in Europe. Protesters denounced the trial as the German state acting on behalf of the Erdogan government in Turkey to repress opposition internationally. The nine men and one woman were arrested in 2015 and the case has dragged on since then. One of the 10, Müslüm Elma, remained imprisoned the entire time and was finally free after the trial, despite his unjust conviction, due to the amount of time he had already been held behind bars.

Four of them had been arrested outside Germany and extradited there, even though they were not accused of committing any crimes in Germany. Instead, they were tried under the infamous section 129 a/b of German law, the “anti-terror” provision that provides for prosecution in Germany for the actions of political parties and movements around the world. Leftist movements and parties in Germany have long called for this provision to be struck, as it has been used repeatedly to suppress people’s movements and justify political persecution. In this case, the courts relied almost solely on evidence provided by the Turkish state to justify the prosecution.

The demonstration outside the courtroom had a strong thread of internationalism, as protesters called not only for the release of the 10 Turkish communists but also for their fellow political prisoners, including Ahmad Sa’adat, imprisoned General Secretary of the Popular Front for the Liberation of Palestine; Georges Ibrahim Abdallah, the Lebanese Arab communist struggler for Palestine jailed in French prisons for over 35 years, Dr. G. N. Saibaba, the Indian scholar held for years in solitary confinement, and Varavara Rao, the Indian poet targeted for political imprisonment.

Throughout the trial, the defendants strongly upheld their political convictions. Müslüm Elma said in court on 29 June 2020: ““We come from the tradition of resistance. The accusation of ‘terrorism’ is one of the biggest lies of the 20th and 21st centuries, which the imperialist thieves and their collaborators have constructed to hide the crimes they have committed against the oppressed peoples of the world and to defame their legitimate struggle.But all these lies cannot prevent the fall of the imperialists…We are internationalist revolutionaries, and you cannot judge us.”

After his release, Müslüm Elma gave an interview, with a poster of Georges Abdallah and Ahmad Sa’adat behind him, once more illustrating his internationalist perspective.

“This process has once again shown how problematic the prosecution of so-called foreign terrorist organizations under Section 129b of the Criminal Code by German law enforcement authorities and courts is. The local judiciary criminalizes resistance against the Erdogan regime and thus supports it,” said Stefan Kuhn, Elma’s defense attorney. 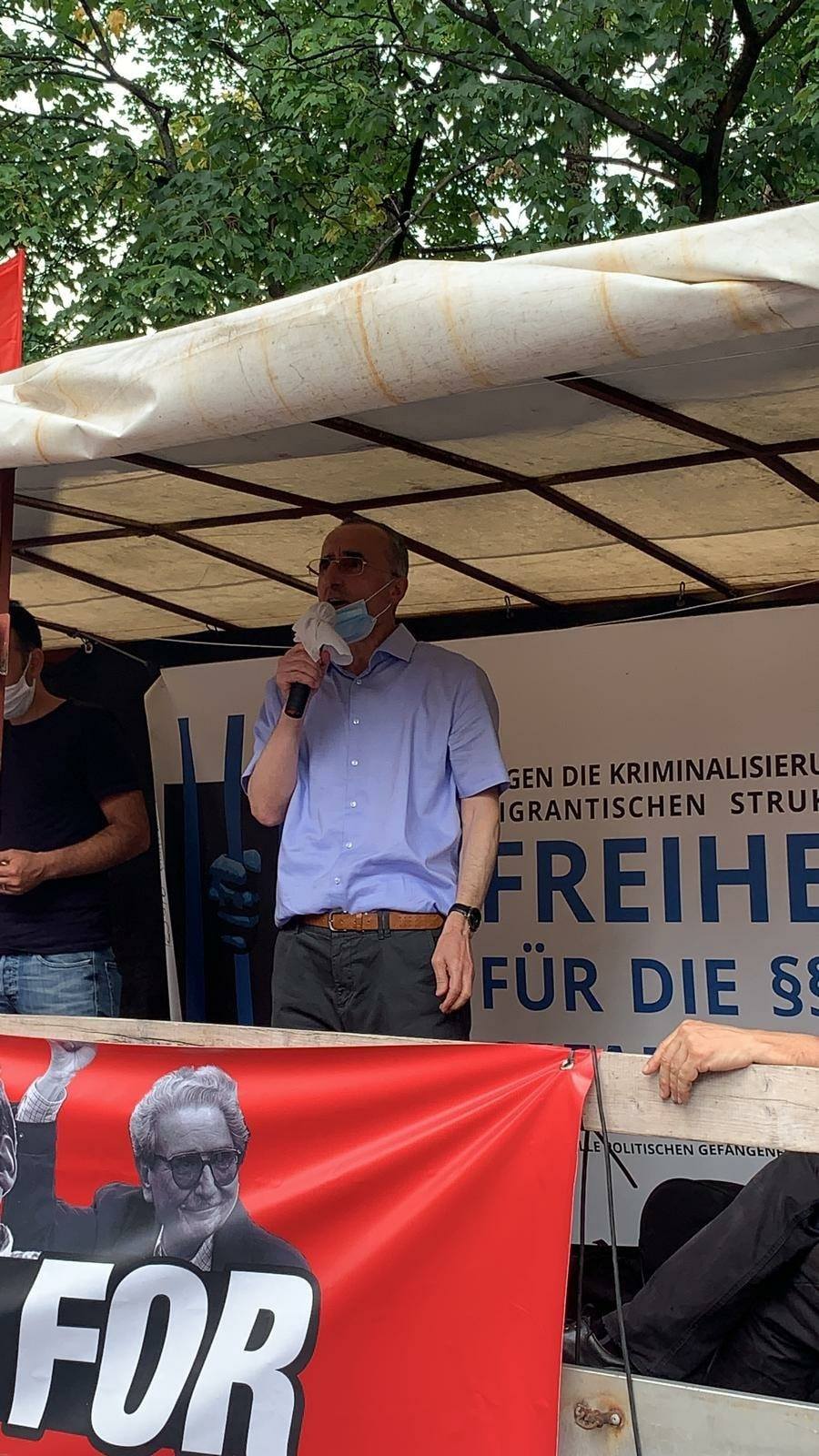 While Elma and his comrades are now free, they have vowed to appeal this unjust and political decision, meant to criminalize revolutionary struggle. Several of the defendants’ sentences, including Elma’s, were already completed due to the years they spent in pre-trial detention, including extradition detention, while the other sentences are suspended pending appeal. They have emphasized the importance of widespread solidarity, in Germany and internationally, in continuing their struggle through years of detention and lengthy criminal trials.

Samidoun Palestinian Prisoner Solidarity Network stands in full solidarity with Müslüm Elma and his comrades in this case, and with all of the Turkish and Kurdish activists and community organizers subjected to repression and imprisonment in Germany and elsewhere in Europe, as well as in Turkey itself.

This form of repression is not distant from the anti-Palestinian repression also practiced by the German state; indeed, the political bans, deportation and exclusion imposed on Rasmea Odeh and then Khaled Barakat sharply mirror the attacks on leftists from Turkey in Germany. We join in the call not only for these sentences and convictions to be overturned but to scrap the infamous section 129 a/b laws that allow for these types of political persecution. Long live international solidarity!