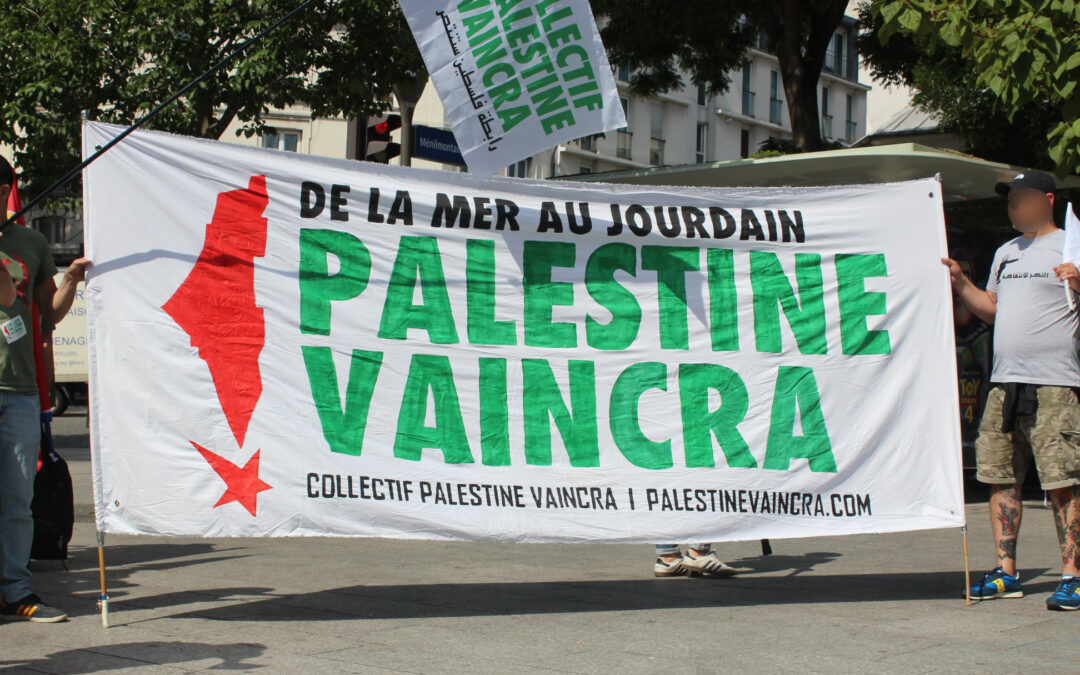 After over 150 organizations in France and internationally came together to denounce the threats and accusations of the Crif – a pro-Israeli apartheid lobby group in France that claims to speak on behalf of the Jewish community – against the Collectif Palestine Vaincra, an active Palestine support organization in Toulouse, France (and a member of the Samidoun Network), La Depeche newspaper in Toulouse agreed to print the Collectif’s response to the attack by Franck Touboul, president of the Crif Midi-Pyrénées, which was initially published in its pages.

Read the French original at the La Depeche website: https://www.ladepeche.fr/2020/08/03/un-collectif-pro-palestinien-denonce-les-amalgames-du-crif-9005066.php Despite having limited space, the Collectif expressed its position clearly on several issues:

The Collectif Palestine Vaincra responds to the remarks of the regional president of the Representative Council of Jewish Institutions in France (Crif) Franck Touboul.

What shocked you about what the Crif’s president said?

The president of the CRIF made very serious remarks against our collective and all the defenders of the Palestinian cause. First of all, we are outraged by the abhorrent practice of attempting to associate our collective with and equate it to the anti-Semitic attacks of Merah, thus abusing the memory of the victims. Moreover, Mr. Touboul is trying to make us look like troublemakers so that the prefecture will ban our activities. Such incitement to violence is irresponsible even though we have been running stands for a year without any concern.

When he denounces support for the PFLP, classified as a terrorist organization, or the call for a boycott which is forbidden in France, how do you react?

As far as the claims about forbidding the boycott are concerned, it is a lie. Moreover, last June, the European Court of Human Rights condemned France for obstructing freedom of expression following the conviction of activists for Palestine who called for a boycott of Israeli products. As far as the PFLP is concerned, all Palestinian organisations that refuse Israeli colonisation are considered “terrorists” by the European Union. This says a lot about the EU’s support for Israeli policy. This is an attempt to silence the Palestinian people and their supporters. There was a time when Mandela was also considered a “terrorist”.

How can challenging the Toulouse-Tel Aviv twinning (sister-city relationship) serve the Palestinian cause?

What we denounce is the economic and political collaboration of the city of Toulouse with the capital of a racist and colonial state. To want to put an end to this twinning is to oppose this policy. Many municipalities have suspended twinning arrangements. This is the case of Lille, which has suspended its twinning with the Israeli town of Safed, or a town in Loiret, which has suspended its twinning with Tuchow, a Polish town with homophobic policies. Toulouse, the former capital of the Spanish Republicans in exile, has a long antifascist tradition that it must honour by putting an end to this scandalous twinning.

Has anti-Zionism become the new face of anti-Semitism, as Franck Touboul claims?

Anti-Zionism is anti-racism. It opposes all forms of discrimination and defends the project of a free and democratic Palestine, from the sea to the Jordan River, for everyone, with equal rights regardless of religious belief, gender, etc. The defenders of Israeli apartheid stand hand in hand with anti-Semites (it should be remembered that the Israeli authorities regularly receive notorious anti-Semites such as the Hungarian Orban) and try to equate anti-Zionism and anti-Semitism in order to suppress support for the Palestinian people.