On Monday, 3 August, the #Humboldt3 – three activists for justice in Palestine and the boycott, divestment and sanctions (BDS) campaign – won a total political and moral victory at Berlin’s Moabit Criminal Court, accompanied by a largely legal victory as well. As the Humboldt 3 – Majed Abusalama, a Palestinian journalist from Gaza; Ronnie Barkan, an Israeli Jewish human rights defender; and Stavit Sinai, an Israeli Jewish anti-colonial scholar and philosophy teacher – note in their press release (reprinted below), “our win is first and foremost in promoting an unapologetic discourse of resistance to the criminal Israeli apartheid regime in Berlin — the last standing bastion for Zionism.”

Samidoun Palestinian Prisoner Solidarity Network congratulates the Humboldt 3, the movement for justice in Palestine in Germany and the global solidarity movement on this important achievement. It must encourage all of us to continue to fight back against repression in all forms, defend resistance, stand in solidarity with one another and uphold the call for justice, return and liberation in Palestine – from the river to the sea. 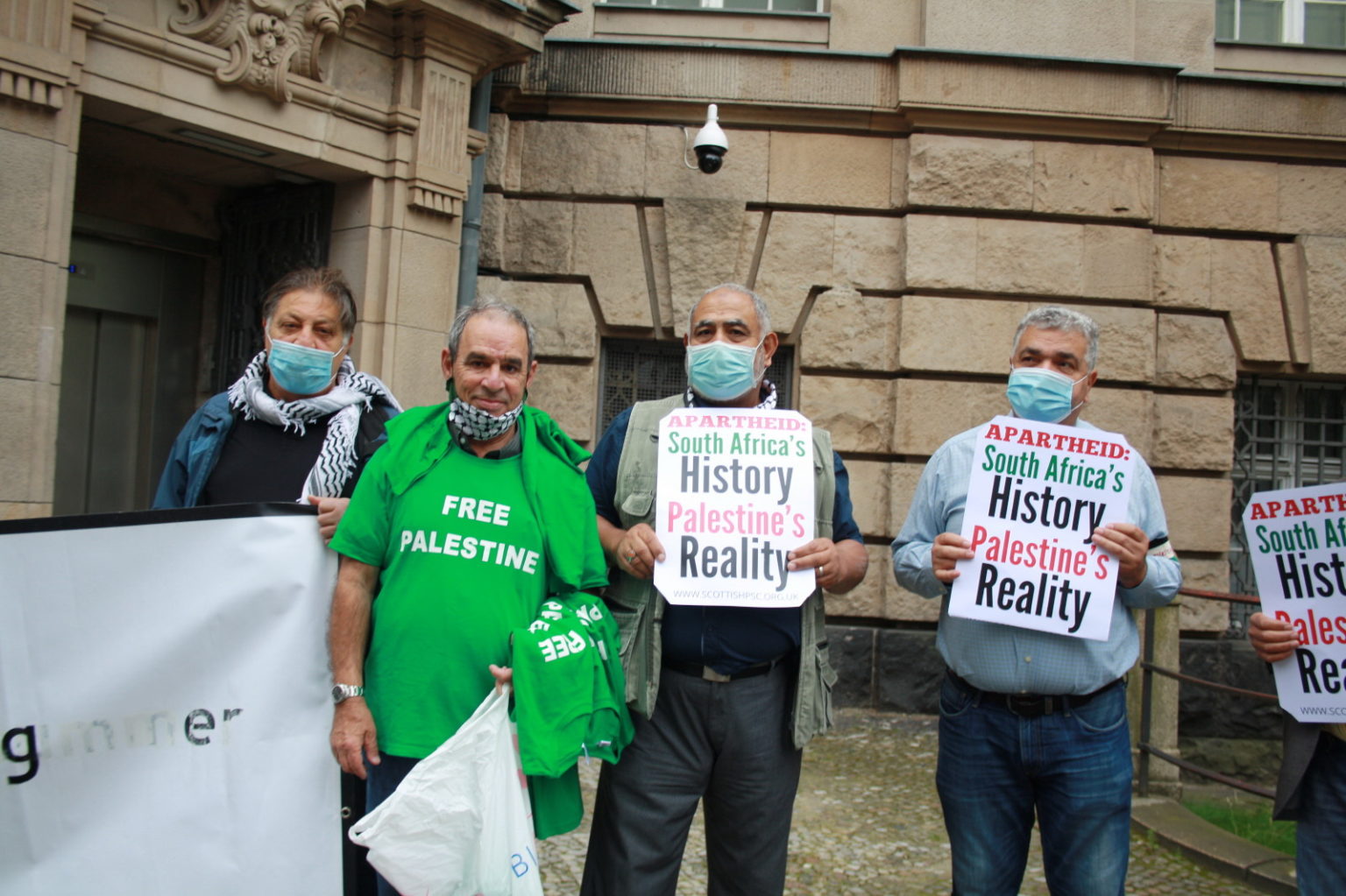 Majed Abusalama and Ronnie Barkan were acquitted of all charges, while Stavit Sinai was convicted of the most minor allegation available, likely in order to save face for the prosecution and the German state, which has pursued these activists for over three years for daring to speak up and oppose Member of Knesset Aliza Lavie, an official representative of the Israeli state giving a speech at Humboldt University in Berlin in 2017, by highlighting Israeli war crimes and crimes against humanity. 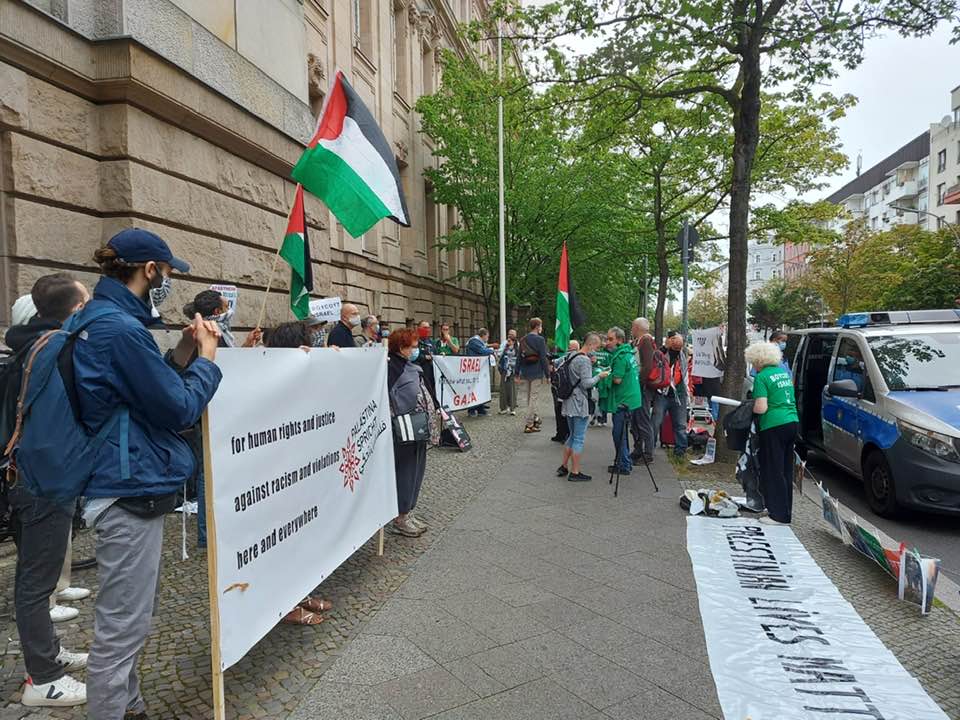 We were acquitted with one only message. The German state is acting ridiculous when they found nothing to criminalize us while we are speaking up about crimes against humanity and apartheid. They created a new minor crime to make us pay 450 Euro. Seriously Germany fails humanity pic.twitter.com/8vHwf49Blq

The trespassing charges against Abusalama and Barkan were dismissed at the beginning of the trial because of formal flaws in the prosecution’s case. It took three attempts throughout the day for the prosecutor to finally drop the charges, despite the judge’s position on the invalidity of the charges.

#Humboldt3 trial continues, I just read my opening statement and @Stav_Si is now reading hers. The prosecution is not very happy to go against the judge's advise, but it is somehow forced (by force majeure?) to not retract assault charges. pic.twitter.com/XYrtYMhW48

In the case of Sinai, she was convicted of “attempted assault” – despite video footage of her being punched in the face – for banging on the door of the lecture hall after being forced to leave. She insisted on re-entering to find out who was responsible for assaulting her – and this was provided as justification for convicting her of attempted assault! 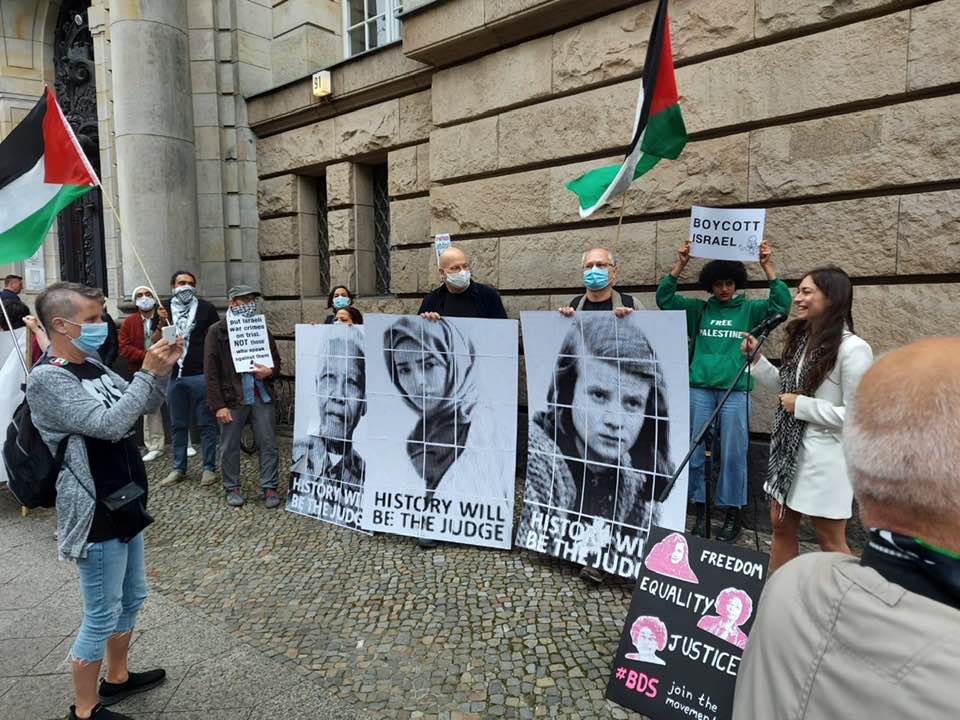 While she was fined 450 EUR, she has refused to pay, saying that she would rather be imprisoned than submit to this injustice. All three left the court victorious, marking not only a legal victory but a political victory, as all three put Israel and its war crimes and crimes against humanity – and the complicity and responsibility of the German state – on trial inside and outside the courtroom.

Equittal for Ronnie and Majed. A Guilty verdict for attempted assault for me. I refuse to pay the 450€ fine. The struggle against the apartheid state of Israel continues from prison. ✊🇵🇸 #Humboldt3 pic.twitter.com/6p32xIv7md

The protest outside the court, which began at 8 am prior to the trial, brought Palestinian community activists and Palestine solidarity and organizers from a number of organizations in Berlin as well as dedicated justice activists who traveled from Scotland, France, England and elsewhere to join the “people’s tribunal” against Israel. It represented the most important site of political victory in Berlin today.

#Humboldt3 – The real trial that took place today: The people's tribunal against Israel outside of the Berlin criminal court. @swilkinsonbc @ronnie_barkan pic.twitter.com/JcQ1miZuzM

Speakers from CAPJPO-EuroPalestine and the Scottish Palestine Solidarity Campaign joined the Humboldt 3 themselves and many Berlin activists from BDS Berlin, Palastina Spricht (Palestine Speaks) and a number of Palestinian community groups to urge justice for Palestine and accountability for Israeli crimes.

As the trial began, activists in Edinburgh, Scotland with the Scottish Palestine Solidarity Campaign held a protest outside the German consulate in the city in solidarity with the Humboldt 3.

At the same time, activists with the International Jewish Anti-Zionist Network held a vigil outside the German embassy in London.

Solidarity action at the German Embassy in London. We will continue showing up for @Stav_Si! https://t.co/R1JldlvIn4 pic.twitter.com/l0QgdwkwPw

These followed a series of international actions in support of the three activists, whose case symbolized the ongoing struggle against anti-Palestinian repression in Germany. In addition to the persecution of these BDS activists for highlighting Israeli war crimes in Gaza, there have been repeated attacks on Palestinian and solidarity organizing in Germany.

The Bundestag passed an anti-BDS resolution that has already been used to crack down on Palestinian organizing, Palestinian former political prisoner and torture survivor Rasmea Odeh was banned from speaking and deported, while Palestinian writer and activist Khaled Barakat was subjected to a political ban and then excluded from the country for his political speech on Palestine.

In Toulouse, France, the Collectif Palestine Vaincra put up posters and signs throughout the city in solidarity with the Humboldt 3, the right to boycott and justice for Palestine.

Samidoun Palestinian Prisoner Solidarity Network congratulates the Humboldt 3 on this important victory over the ongoing efforts to suppress Palestinian communities and activism for justice in Palestine in Germany and around the world. This legal, moral and political victory underlines the importance of continuing to resist repression everywhere it occurs in order to advance the struggle for the liberation of Palestine, from the river to the sea. We invite all to continue the struggle this Friday, Saturday and Sunday, 7-9 August, as part of the Days of Resistance to Israeli annexation and colonization!

Victory in the Humboldt3 Trial

Apartheid crimes are put in the spotlight

Today concluded a three-year saga which started during our disruption of war criminal and apartheid representative MK Aliza Lavie, back in June 2017. The trial ended in victory!

Our win is first and foremost in promoting an unapologetic discourse of resistance to the criminal Israeli apartheid regime in Berlin — the last standing bastion for Zionism. Throughout the trial we insisted on making clear statements that emphasize our legal and moral obligation to oppose Israeli crimes against humanity.

We also claim victory because Majed and Ronnie were fully acquitted, while Stavit received the minimum possible punishment, probably to save face for the prosecution.

The trial started with the judge negating the trespassing charges altogether on the basis of formality flaws by the prosecution. He suggested that the prosecution will drop the case in its entirety. The state prosecutor needed to consult with her superiors, this ritual repeated itself three times throughout the day, where the judge encouraged her to drop the case and each time she was instructed by her bosses to carry on no matter what.

After five hours of deliberations which included slander, lies, contradictions, sexism, admission of testimony coordination and self incrimination of physically assaulting Stavit — the judge ended up siding with the state by handing in a guilty verdict albeit keeping it to the bare minimum.

Why was Stavit found guilty?

For banging on the door of the lecture room, insisting on re-entering to find out the details of the person who had just punched her in the face. Thanks to one of the Zionist witnesses who inadvertently showed the judge a video that he had never published before — the punching was clearly visible — giving immense credibility to Stavit’s testimony while discrediting each and every Zionist witness that testified against us.

Another victory that we are deeply grateful for is the overwhelming show of support and solidarity from across the world. From vigils outside German embassies, to a successful crowdfunding campaign in order to cover our mounting legal fees, to the coming together of many supporters who flew in to Germany especially in order to attend today’s trial and actively participate in the people’s tribunal outside the courthouse.

The struggle against apartheid continues on all fronts!