On 25 November 2020, marked as the International Day for the Elimination of Violence Against Women, multiple initiatives took place around the world in solidarity with Palestinian women prisoners, especially the imprisoned feminist leader Khitam Saafin, the President of the Union of Palestinian Women’s Committees, jailed without charge or trial under administrative detention.

There are currently 40 Palestinian women prisoners, including student activists like Ruba Assi, Mays Abu Ghosh, Layan Kayed and Elia Abu Hijleh; parliamentarians and advocates like Khalida Jarrar; journalists like Bushra Tawil; and dozens of others. Political imprisonment is one key aspect of the institutional violence against Palestinian women enacted by Israeli occupation and colonization and enabled by U.S., Canadian and European support for Israel’s ongoing war crimes and crimes against humanity targeting the Palestinian people.

Between 1967 and 2017 alone, 10,000 Palestinian women were imprisoned by the Israeli occupation authorities for their real or perceived involvement in the Palestinian resistance to racism, colonization and occupation. The majority of Palestinian women prisoners have been subjected to various forms of torture and violence, including physical and psychological torture, forced strip searches, sexual harassment ad assault.

On 25 November 2020, the International Day for the Elimination of Violence Against Women, Collectif Palestine Vaincra – a member organization of the Samidoun Network – released a new video, Women, Feminism and Palestine, featuring a nearly 10-minute interview with Zainab Younes, Palestinian activist and a member of the collective. We urge all supporters of Palestine to listen to this video (Arabic audio, English subtitles – French subtitles available here)

Alkarama Palestinian Women’s Mobilization in Spain also released a video (below) in Spanish, highlighting the struggle of Palestinian women prisoners on this international day of feminist solidarity.

Samidoun Deutschland released a video highlighting the contributions of organizers in Frankfurt and elsewhere participating in the mobilization on the International Day for the Elimination of Violence Against Women:

In various cities, including Toulouse (France), Murcia (Spain), Rotterdam (Netherlands), Frankfurt (Germany) and Naples (Italy), feminist activists for justice in Palestine – including Samidoun organizers – participated in street actions, protests and mobilizations, carrying signs, banners and posters calling for the liberation of Khitam Saafin, her fellow Palestinian prisoners, Palestinian women – and all of Palestine.

In Toulouse, organizers with the Collectif Palestine Vaincra participated in the demonstrations: 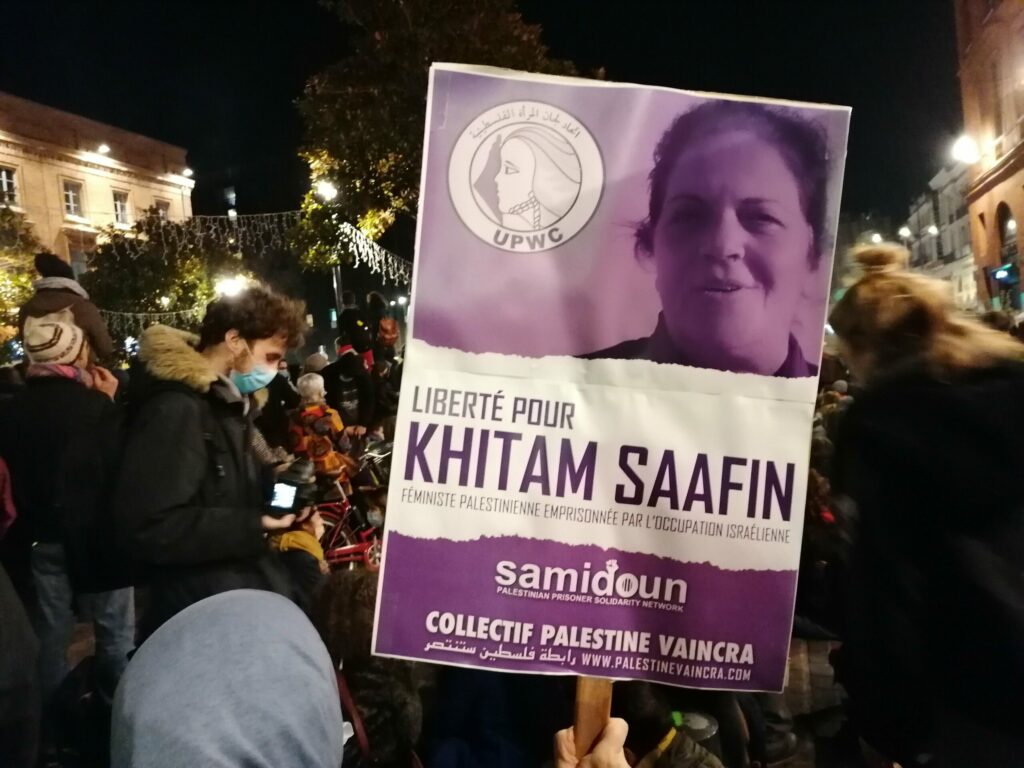 In Murcia, Samidoun España and Alkarama activists joined the mobilization: 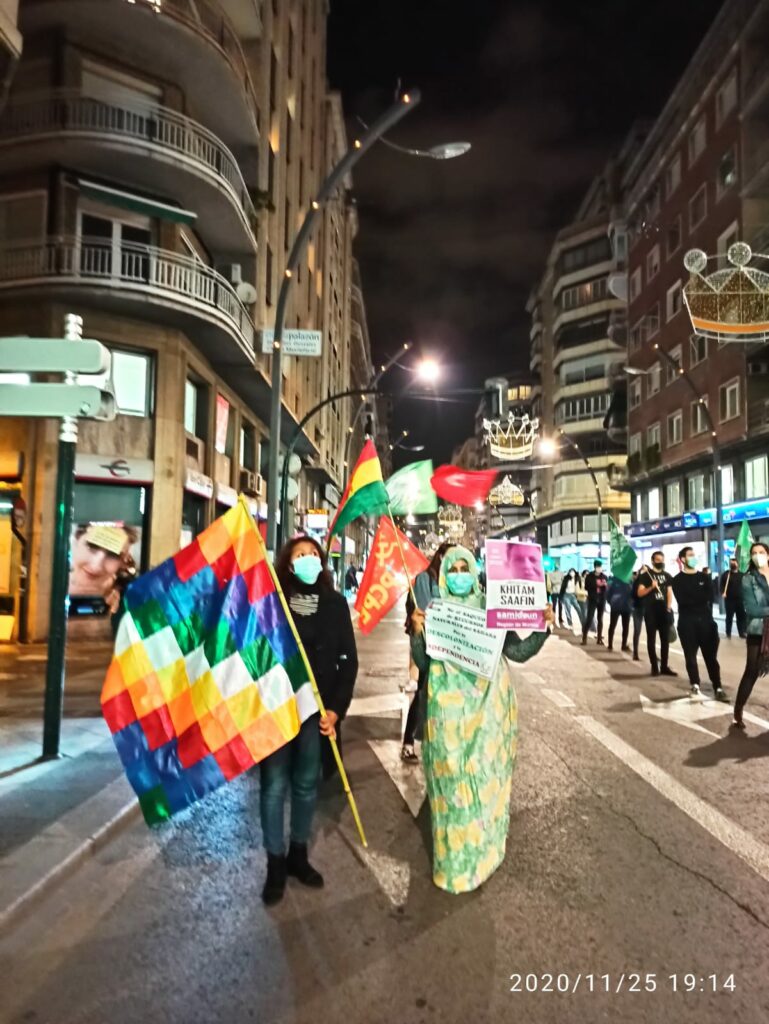 In Rotterdam, the International Women’s Alliance (IWA) Europe and Revolutionaire Eenheid members showed solidarity with the s#FreeKhitamSaafin campaign at the action for the International Day, along with Kurdish and Filipina and Dutch women’s organizations.

All of these actions accompanied a Twitterstorm and social media campaign organized by Samidoun Palestinian Prisoner Solidarity Network, the US Palestinian Community Network, the International Women’s Alliance – Europe, Al-Awda, the Palestine Right to Return Coalition, Within Our Lifetime – United for Palestine, Alkarama Palestinian Women’s Mobilization and the Palestinian Youth Movement with the hashtags #FreeKhitamSaafin #FreePalestinianWomen.

Statistics indicate that over a million Twitter users saw or interacted with Tweets highlighting the campaign, and numerous organizations and activists participated in the online action, including Member of European Parliament Manu Pineda:

In addition, the Association Belgo-Palestinienne organized a webinar, titled “Women in struggle in the occupied Palestinian territory”, giving the floor primarily to the Palestinian psychiatrist Samah Jabr, who addressed the political and social situation of Palestinian women, including Palestinian prisoners, and discussed the case of Khitam Saafin, among others.

Watch the video (in French):

We recommend the following resources for more information on Palestinian women prisoners: