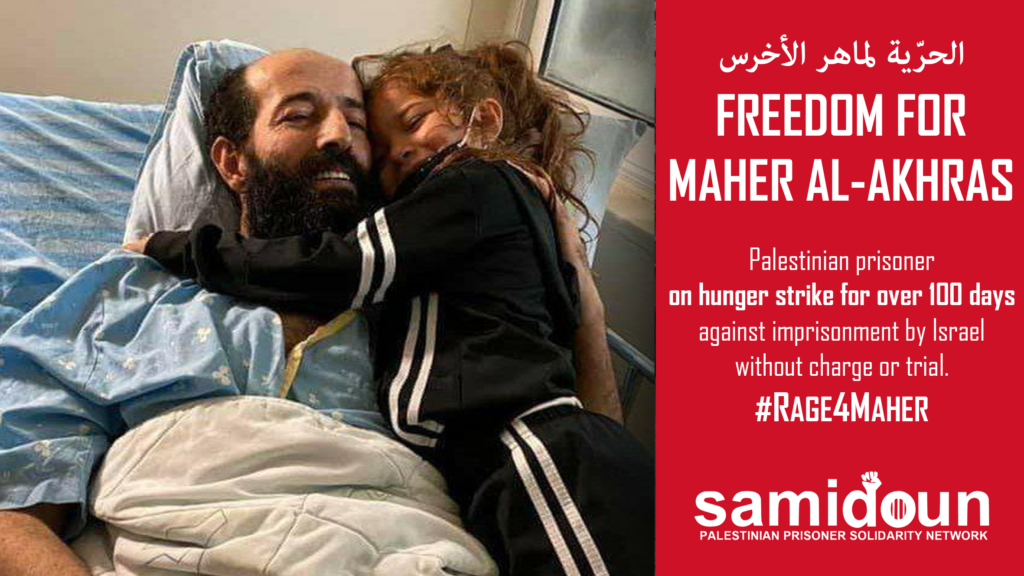 Samidoun Palestinian Prisoner Solidarity Network salutes Maher al-Akhras and the Palestinian people on the occasion of his victory after 103 days of hunger strike. His steadfastness and commitment to struggle, with his very life on the line, continue to inspire all  those around the world who support the Palestinian people and their just cause of return and liberation.

Al-Akhras, 49,  Palestinian prisoner jailed without charge or trial under Israeli administrative detention, announced the suspension of his hunger strike after 103 days on 6 November 2020. Specifically, he announced an agreement to release him on 26 November 2020, and he will remain hospitalized until the date of his release for treatment. The agreement to end his hunger strike reportedly came with a firm commitment to his release on 26 November, unlike previous proposals to end the strike.

Al-Akhras is one of approximately 350 Palestinians jailed without charge or trial under Israeli administrative detention, a practice introduced to Palestine by the British colonial mandate and routinely used by Israel to jail Palestinian leaders and community organizers. There are approximately 4,400 Palestinian political prisoners in total at the present time. Administrative detention orders are indefinitely renewable, and Palestinians — including al-Akhras — have spent years at a time jailed under so-called “secret evidence,” never knowing when they will obtain their release. Al-Akhras launched his hunger strike on 27 July after he was seized by Israeli occupation forces and ordered to administrative detention.

Samidoun Palestinian Prisoner Solidarity Network sends its warmest congratulations to Maher al-Akhras, is family, the Palestinian people and all friends of Palestine and forces of justice in the world on this occasion. We salute all of those who have protested, marched, gone on hunger strike and organized to highlight his case and the struggles of the Palestinian people, in every corner of the world. Now, it is time to continue the movement to support all of his fellow prisoners – and all Palestinians – in the cause of freedom.

We also recognize that all of these victories accomplished by Palestinian prisoners engaged on hunger strikes will only be partial so long as Palestinians continue to be imprisoned by the colonial Israeli regime, and so long as the Palestinian people continue to face occupation, apartheid, siege and dispossession at the hands of Zionism. We urge all who were inspired by Maher’s commitment, bravery and self-sacrifice to continue the campaign to free Palestinian prisoners. All of those who love freedom and justice look forward to celebrating with Maher al-Akhras – and look forward to celebrating the day in which all Palestinians are free on their liberated land. The steadfastness, struggle and commitment of the Palestinian prisoners – the leadership of the Palestinian movement – point in the direction not only to individual freedom and victory, but toward the liberation of Palestine, from the river to the sea.