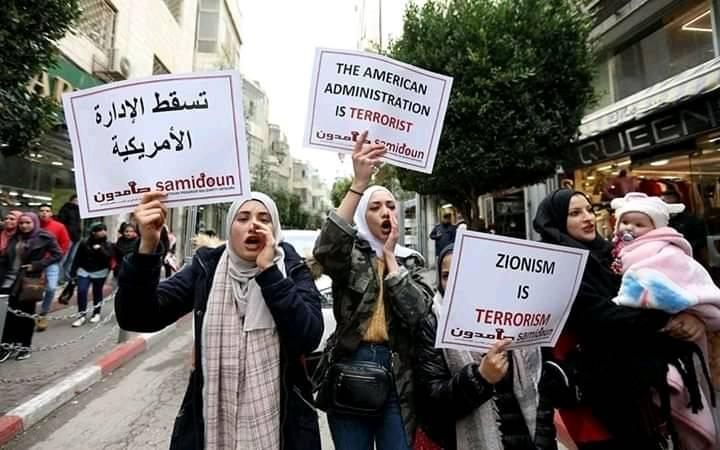 Organizations and activists in Palestine and around the world have expressed solidarity with Samidoun Palestinian Prisoner Solidarity Network in response to the Israeli regime’s designation of Samidoun as a “terrorist organization” for its public work advocating for freedom for the nearly 5,000 Palestinian political prisoners in Israeli jails.

In our response statement, Samidoun emphasized that “we will continue to organize and mobilize internationally in defense of Palestinian rights and liberation. This is the latest manifestation of a smear campaign that is intended to silence international support for the Palestinian people and especially the nearly 5,000 Palestinians jailed by the Israeli occupation. This is an attack on the Palestinian prisoners’ movement as well as the right of Palestinians in exile and diaspora to organize. We affirm that we will not be silenced or deterred by Israel’s smear campaigns.”

Samidoun has received widespread support in response to this repressive attack, with many different organizations and individuals in Palestine and around the world sharing and republishing the statement in English, Arabic, French, Italian, German, Spanish, Swedish, Greek and Dutch. A number of organizations have also issued statements of their own condemning this action. We know that this list is incomplete and we will provide further updates about upcoming statements. Several of these were published in French at the Collectif Palestine Vaincra website.

In one statement, Al-Qutob, the Democratic Progressive Student Pole at Bir Zeit University, “announced our full solidarity with the Samidoun Network, which supports the prisoners in occupation prisons, after being classified as a ‘terrorist’ organziation by the so-called Occupation Ministry of War. In this regard, we affirm that the brutal occupation attempts repeatedly to suppress the spirit of commitment and struggle among Palestinian youth through killing, arrest and oppression, but we affirm that all of their attempts will not undermine our resolve and will only increase our insistence.”

The Ministry of Prisoners in Gaza “denounced the classification of the Samidoun Network defending Palestinian prisoners as a ‘terrorist’ organization by the Israeli Ministry of War….The network’s members, active in European countries and North America, are working to help Palestinian prisoners in their struggle for freedom, and the network plays an important role in efforts to expose the occupation internationally.”

The prison branch of the Popular Front for the Liberation of Palestine issued a statement, in which it said “The prisoners’ movement is following with great interest and pride the strong efforts made by the Samidoun Network in support of the just cause of the prisoners, exposing the violations og the occupation and the prison administration against them, and all of them are firmly convicnced that the Zionist decision will be an even greater motivation for the network and an inspiration for its members and all of the solidarity activists around them to continue their efforts to uphold the prisoners’ cause.”

In a statement, the Preparatory Committee of the Palestinian Alternative Path Conference (Masar Badil), stated “its solidarity and principled stand with the comrades in Samidoun Network and emphasizes that this racist and unjust Zionist decision demonstrates the effectiveness of Samidoun’s role in advancing the cause of Palestinian prisoners and detainees and in defending the rights of our Palestinian people in the face of the crimes of the occupation and its colonial racist policies throughout occupied Palestine. The Preparatory Committee considers this Zionist decision as one targeting the Alternative Palestinian Path but also all forces, organizations and institutions participating in it, and all of the voices that defend the prisoners’ movement and the rights of the Palestinian people everywhere…The Samidoun Network, which has become one of the arms of the Palestinian prisoners’ movement and an active voice in the service of the cause of Palestine and its people, has constituted a source of inconvenience to the governments and parties of the racist fascist right in the West and disturbed the comfort of the Zionist occupation, its leaders and embassies through continuous action and organizing. Accordingly, we call for joining its membership and participating in its activities, as this is the strongest response to the Zionist entity’s decision and the revolutionary way to thwart and defeat it.”

In a statement, the Palestinian Youth Movement affirmed that “Israel has long used “terrorism” as a vehicle for criminalizing any resistance to Zionism, including political advocacy on behalf of prisoners, the exact work in which Samidoun engaged and for which it has received international recognition and acclaim. As a grassroots, Palestinian, Arab and internationalist institution, Samidoun has been a critical lifeline of support for incarcerated Palestinians who are tried in Israeli military court, which has a 99% conviction rate for Palestinians and incarcerates children as young as 12 years old. The ‘terrorist’ designation is nothing more than collective punishment for the brave and tireless work of the organization’s members to ensure that our prisoners’ struggle remains at the fore of public consciousnesses and at the root of our people’s collective resistance against the Zionist regime…As Palestinian youth, we affirm that Israel can add every Palestinian to its list without for a second changing our determination to continue resisting and fight for our land and our people’s right of return.”

The US Palestinian Community Network affirmed that it “dismisses ridiculous charges of “terrorism” from the racist, white-settler-colonialist, terrorist state of Israel. Samidoun organizes in support of Palestinian political prisoners, and the liberation of Palestine. We defend Samidoun!”

USPCN dismisses ridiculous charges of "terrorism" from the racist, white-settler-colonialist, terrorist state of Israel. @SamidounPP organizes in support of Palestinian political prisoners, and the liberation of Palestine.

Wa’ed Association for Prisoners and Freed Prisoners in occupied Palestine denounced the designation of Samidoun Network as “an attempt to neutralize and block any window that supports the cause of the prisoners in occupation prisons, and confirms the importance of popular and media efforts in exposing occupation crimes…Wa’ed declares its full solidarity and support to the Samidoun Network against the occupation decision, praising its work in support of the rights of the prisoners.”

The Free Democratic Palestine Movement issued a statement, declaring: “An attack on one is an attack on all!.. We in the Free Democratic Palestine Movement (FDPM) stand with (Samidoun) against this attack on their freedom of speech and political fight. We demand the immediate release of all Palestinian political prisoners and call on the world progressive and democratic forces to join their struggle. We condemn in the strongest possible terms all the assaults by Israel or anyone else on freedom of speech and any attempt to stifle debate on the Palestinian cause for it is a civil and human right enshrined by International law and treaties.”

Palestinian prisoners are a major pillar of the Palestinian movement for liberation. 5,000+ political prisoners languish in Israel's jails today. We stand firmly against Israel's criminalization of Palestinian civil society groups working in their defense.https://t.co/oJFv75EC2D

The Global Campaign to Return to Palestine issued a statement in response to the designation, declaring that “It is not surprising that the resistance fighters and the honorable people are accused of terrorism by the criminals against humanity, nor for the Zionist Ministry of War to classify Samidoun as a terrorist organization, especially after the continuous successes of the Samidoun network in revealing the true terrorist face of the occupation. We consider solidarity with Samidoun an obvious matter and one of the basics of solidarity with free prisoners and with the Palestinian people.”

The International League of Peoples’ Struggle Commission 3 – focusing on political prisoners – affirmed in its statement that “The real terrorists are States such as Israel’s which has brought much terror through killings, arrests, detention and other human rights violations against the Palestinian people and through its Zionist occupation of Palestinian land and territories. We salute Samidoun and the Palestinian people for their bravery in standing up against Israel’s multitiered system of oppression – colonisation, occupation and apartheid. No designation of an oppressive government can stop the advocacy for and struggle of the Palestinian political prisoners. Hands off Samidoun! Long live the Palestinian struggle for freedom and liberation!”

Decolonize This Place, an action-oriented decolonial movement in New York City, declared: “Israel recently designated Samidoun a ‘terrorist’ organization; and our response is anti-colonial and unequivocal: Israel is a settler-colonial project and thus has no standing or legitimacy in our eyes. It must be dismantled.”

UPOTUDAK, the International Committee for Solidarity with Political Prisoners, declared that “Samidoun is not alone! Samidoun is legitimate and cannot be inhibited!…We know that the state of Israel and the reactionary imperialist powers..have no tolerance for any democratic demands and democratic struggle. But no matter what decision they take, no matter how much they denigrate, they were and will never be able to remain standing in front of the legitimate and just struggle of the peoples.”

The Friends of Palestine Against Imperialism and Zionism in Turkey declared, “We stand with Samidoun! Resistance is not terrorism. Supporting the rights of captives captured by a colonizer is not terrorism. Building an apartheid stae by exiling and murdering the inhabitants of a land IS terrorism.”

We stand with @SamidounPP ‼️

Resistance is not terrorism ❌

Building an apartheid state by exiling & murdering the inhabitants of a land IS terrorism ✅ pic.twitter.com/y96wikc2bQ

Palästina Antikolonial in Germany denounced Gantz’s action as a “continuation of the road of criminalization and suppression of any Palestinian self-organization and solidarity work. This attempt to isolate Palestinian organizations through defamation comes just a few days after the launch of the campaign for the freedom of numerous Palestinian students.

Alfred de Zayas, the first UN Independent Expert on the Promotion of a Democratic and Equitable International Order, affirmed that “Samidoun, the Palestinian Prisoner Solidarity Network, is certainly not a “terrorist organization”, but one that can invoke the ICCPR and self-determination.”

Samidoun, the Palestinian Prisoner Solidarity Network, is certainly not a “terrorist organization”, but one that can invoke the ICCPR and self-determination.

These expressions of solidarity indicate the broad rejection of Israeli attempts at repression and silencing as well as the importance of redoubling our efforts without intimidation by the threats of a racist, settler colonial state. In response to these actions, now is the time to escalate our solidarity with the Palestinian prisoners — especially the international campaign to release Palestinian student prisoners, endorsed by over 325 groups, political parties, social movements, trade unions, associations and student organizations  — and our efforts for a liberated Palestine from the river to the sea.