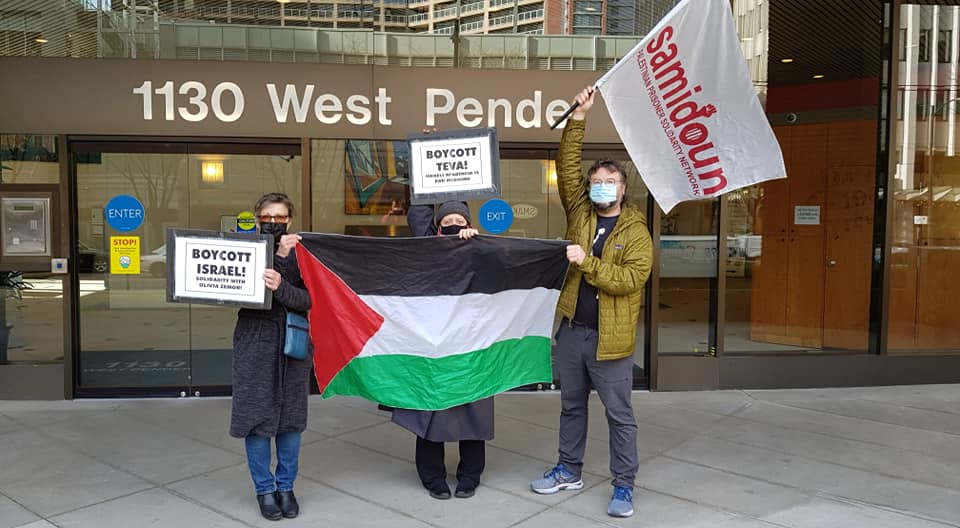 Samidoun Palestinian Prisoner Solidarity Network activists joined with the Canada Palestine Association and BDS Vancouver – Coast Salish Territories in a delegation to deliver a letter of protest to the French consulate in Vancouver, Canada, on 16 March 2021 in solidarity with Olivia Zémor. Zémor, president of CAPJPO-EuroPalestine, faced a trial in Lyon, France, on the same day over her publication of a call to boycott TEVA, the Israeli pharmaceutical company. 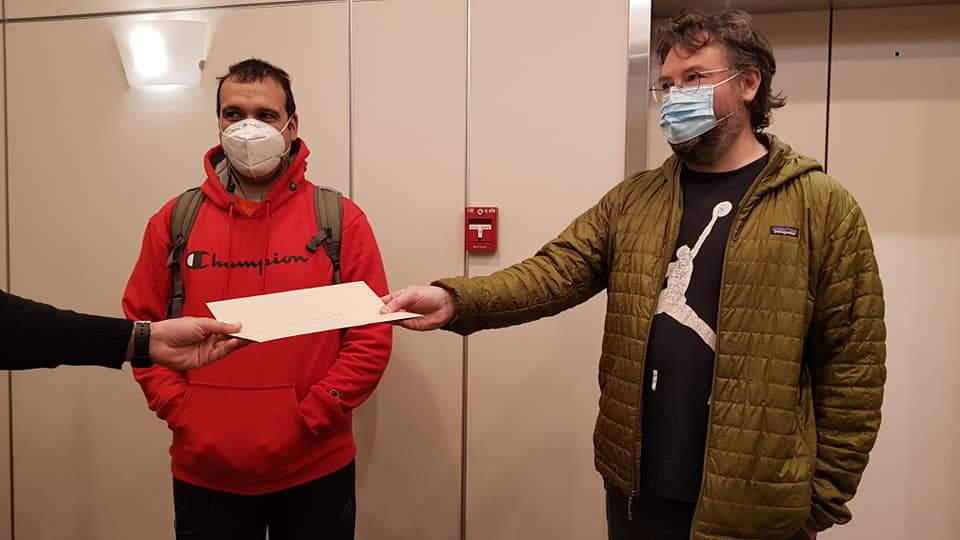 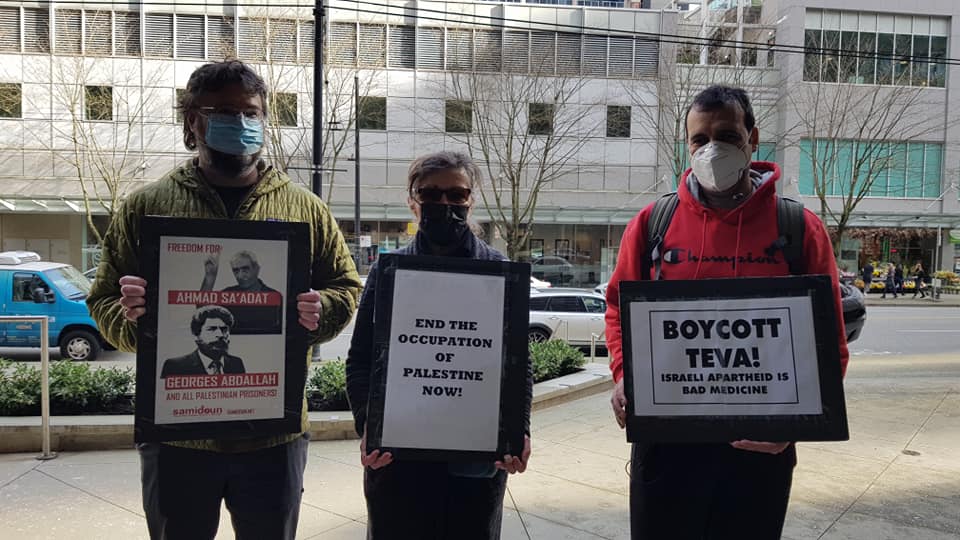 They also carried signs calling for the liberation of Palestinian political prisoners, including Georges Ibrahim Abdallah, jailed for over 36 years in France, along with their letter of protest.

They delivered the letter (below) to the French consulate, along with the statement of the Canadian BDS Coalition in support of Zémor. All three organizations are members of the Coalition. 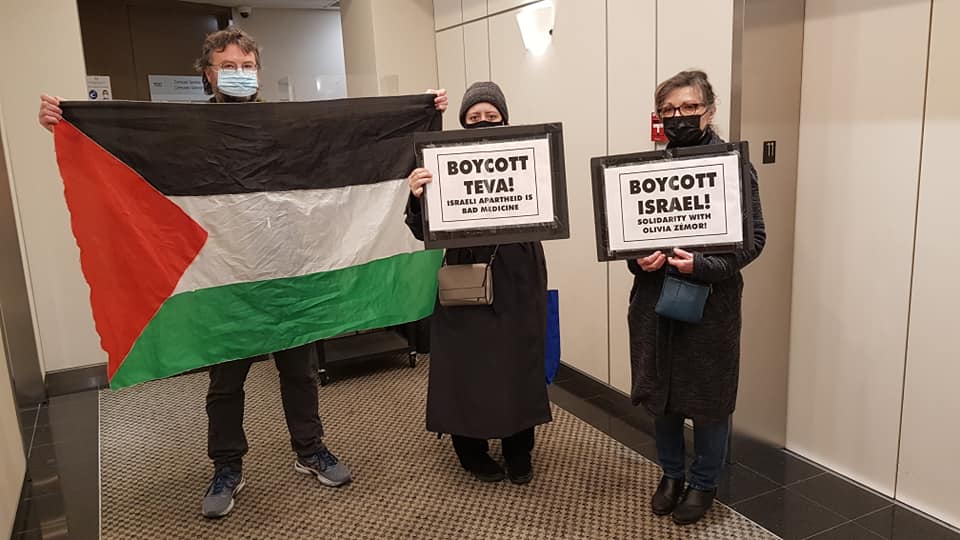 This action in Vancouver joined many mobilizations in France and around the world to support Zémor and expand the call to boycott TEVA, including the Palestine Stand organized by Collectif Palestine Vaincra in Toulouse, as well as mobilizations in Paris, Lille, Lyon and elsewhere.

Activists in Australia delivered a letter to the French consulate in Adelaide in support of Zémor, while organizers in London — including the International Jewish Anti-Zionist Network and Football Against Apartheid — delivered a protest letter with global signatures to the French embassy to the United Kingdom.

15 March, French embassy, London, @IJAN_Network joined @FAApartheid to hand in a letter to the ambassador in defence of Olivia Zémor president of @Europalestine1 facing charges in Lyon court tomorrow for publishing a call to #BoycottTEVA. Solidarity with Olivia! Free Palestine! pic.twitter.com/0aWjXRMzCQ

In Belgium, the Plate-forme Charleroi-Palestine organized a solidarity gathering calling for the boycott of TEVA in the center of Charleroi on Saturday, 13 March. 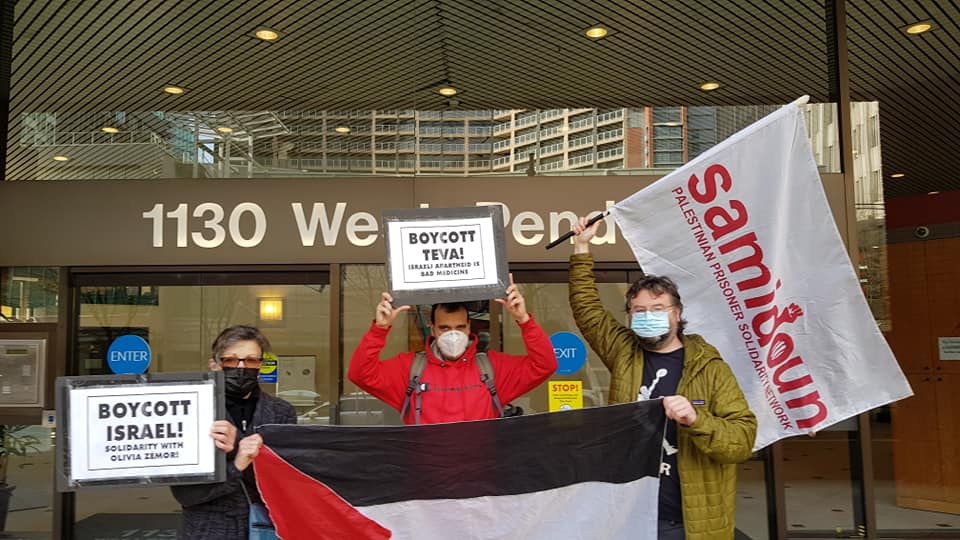 We write today, appalled by the ongoing persecution and targeting of activists for Palestinian rights in France. Olivia Zémor, the president of CAPJPO-EuroPalestine association in France, is facing a trial in Lyon’s court today, 16 March. This case was brought by TEVA Pharmaceuticals in response to Ms. Zémor’s publication of a grassroots call to boycott its products on the europalestine.com website. It is an appalling example of a massive global multinational corporation, Israel’s largest by market value, attempting to use the costs and power of the court to shut down independent voices critical of corporate human rights violations.

TEVA Pharmaceuticals is a manufacturer of generic drugs. It is the largest such manufacturer in the world. As a massive Israeli corporation, TEVA is one of Israel’s largest contributors to its tax base, its military occupation of the land and people of Palestine. Now, TEVA is trying to silence justice advocates in France through the use of the courts to intimidate people and organizations and suppress calls for boycott of the company due to its links to and complicity with consistent Israeli violations of fundamental Palestinian rights.

The case against Ms. Zémor is clearly a corporate effort to silence popular dissent. It is outrageous and appalling. However, the French state itself is not innocent in this suppression of voices for justice in Palestine.

Despite the decision of the European Court of Human Rights upholding the right to boycott Israel and invalidating French official prosecutions of boycott activists for their work to support Palestinian rights, requiring France to pay compensation to the prosecuted activists, the French government has continued to encourage public prosecutions of people for calling for a boycott of Israel.

This comes in direct defiance of the ECHR ruling, violating the human rights of people in France at the same time that it evinces clear complicity with Israeli violations of Palestinian human rights.

Minister of Justice Eric Dupond-Moretti, in blatant violation of the decision of the ECHR, has distributed a circular to prosecutors throughout the country, urging them to prosecute activists for boycott, divestment and sanctions campaigns and attempt to win convictions for their expressions of solidarity with the Palestinian people.

TEVA’s pursuit of Olivia Zémor comes directly in line with this circular by Minister Dupond-Moretti. It represents a dangerous alliance of Israeli multinational corporations and the French state to silence and suppress Palestinian rights advocacy through the use of both public prosecutions and private lawsuits. The call for the boycott of Israel is backed by a broad consensus in Palestinian civil society and public discourse, inside occupied Palestine and in exile.

Palestinians face extrajudicial killings, land confiscation, mass imprisonment, home demolitions, the ongoing siege on Gaza and the incessant presence of military occupation, colonialism and apartheid throughout occupied Palestine. Palestinians in exile and diaspora have been denied their right to return home for over 72 years. In response, France is not acting to sanction the perpetrator — Israel — but rather to suppress all calls for a grassroots, popular boycott of Israel and demands for the implementation of Palestinian rights.

We urge France to immediately end its violation of the ECHR decision and withdraw the Dupond-Moretti circular. Further, we urge France to uphold its own responsibilities under international law, not only to stop the persecution and silencing of Palestinian rights activists and the boycott movement, but to end its ongoing complicity with and support for Israel’s attacks on Palestinian rights. 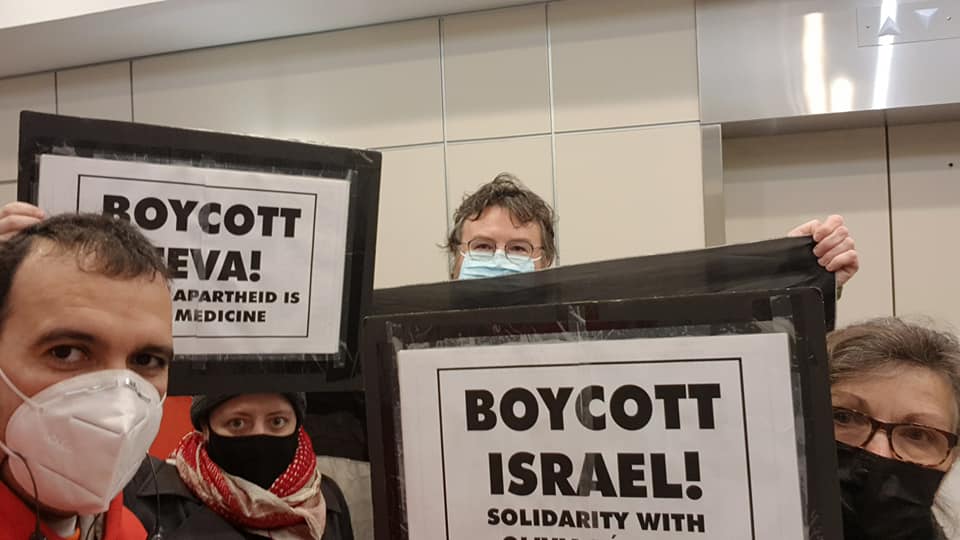