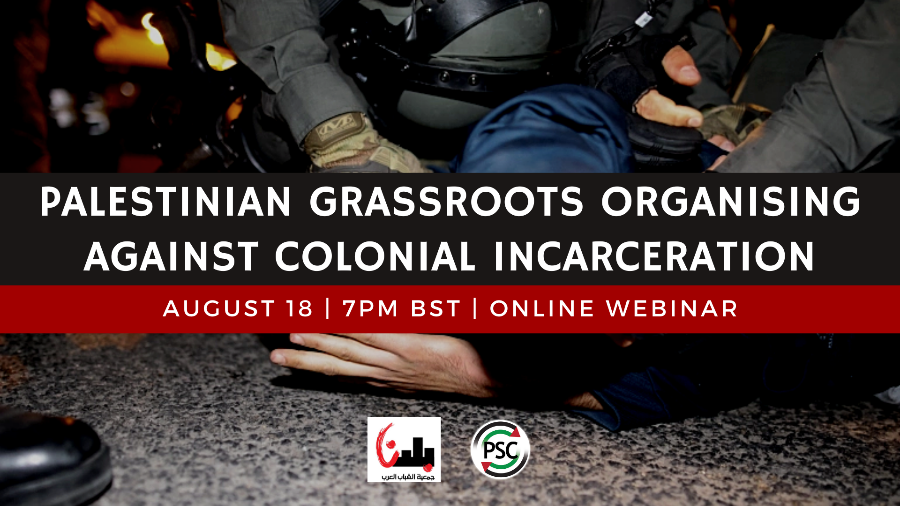 The following event is organized by the Palestine Solidarity Campaign (UK):

Over the course of April, May and June 2021, Palestinians participated in one of the largest and most inspiring mobilisations of recent years, including a general strike for dignity. Throughout historic Palestine and exiled Palestinian communities, thousands unified in struggle, calling for rights, dignity, justice and freedom. These extraordinary events brought new energy to the Palestinian decolonisation and anti-apartheid movement and brought about a sea change in people speaking out and standing in solidarity with Palestine internationally.

To quell the uprising, Israel relied on classic colonial tactics: direct lethal violence and arbitrary arrests resulting in repressive, lengthy, and costly legal procedures to intimidate Palestinians and attempt to silence their collective power. The wide and unprecedented participation of Palestinians citizens of Israel meant that they were targeted en masse: More than 2,000 were arrested and around 200 indicted, the mass majority of them working-class youth. Similar to Palestinian detainees from other parts of Palestine’s fragmented geography, they suffer from physical and psychological abuse at the hands of Israeli police compounded with discriminatory procedures and rulings by Israeli courts.

Palestinians are self-organising and pushing forward their liberation goals of freedom and justice, building upon the unity built through the past few months. In this conversation we will hear about these efforts, including the Dignity and Hope Detainees Fund Project to provide legal support and solidarity to the families and communities most impacted.

This event is hosted by Baladna: Association for Arab Youth and Palestine Solidarity Campaign, and will feature a panel of activists and lawyers:

Soheir Assad, a Haifa-based human rights lawyer and a member of the Advisory Board of the Dignity and Hope Detainees Fund Project at Baladna: Association for Arab Youth. Soheir will speak about the political and social context for the May uprising, the legal and political precarity experienced by Palestinian citizens of Israel, and new community organizing efforts to provide meaningful direct support to those detained.

Sahar Francis, lawyer and director of Addameer: Prisoner Support and Human Rights Association in the occupied West Bank. Sahar will speak about the historical and ongoing ways that Israel uses incarceration as a tool of political repression against Palestinians under occupation and apartheid rule across their historic homeland.

The event will be chaired by Riya Al’Sanah, who is a Palestine-based political organiser and is also on the advisory board of the Dignity and Hope Detainees Fund Project at Baladna: Association for Arab Youth.