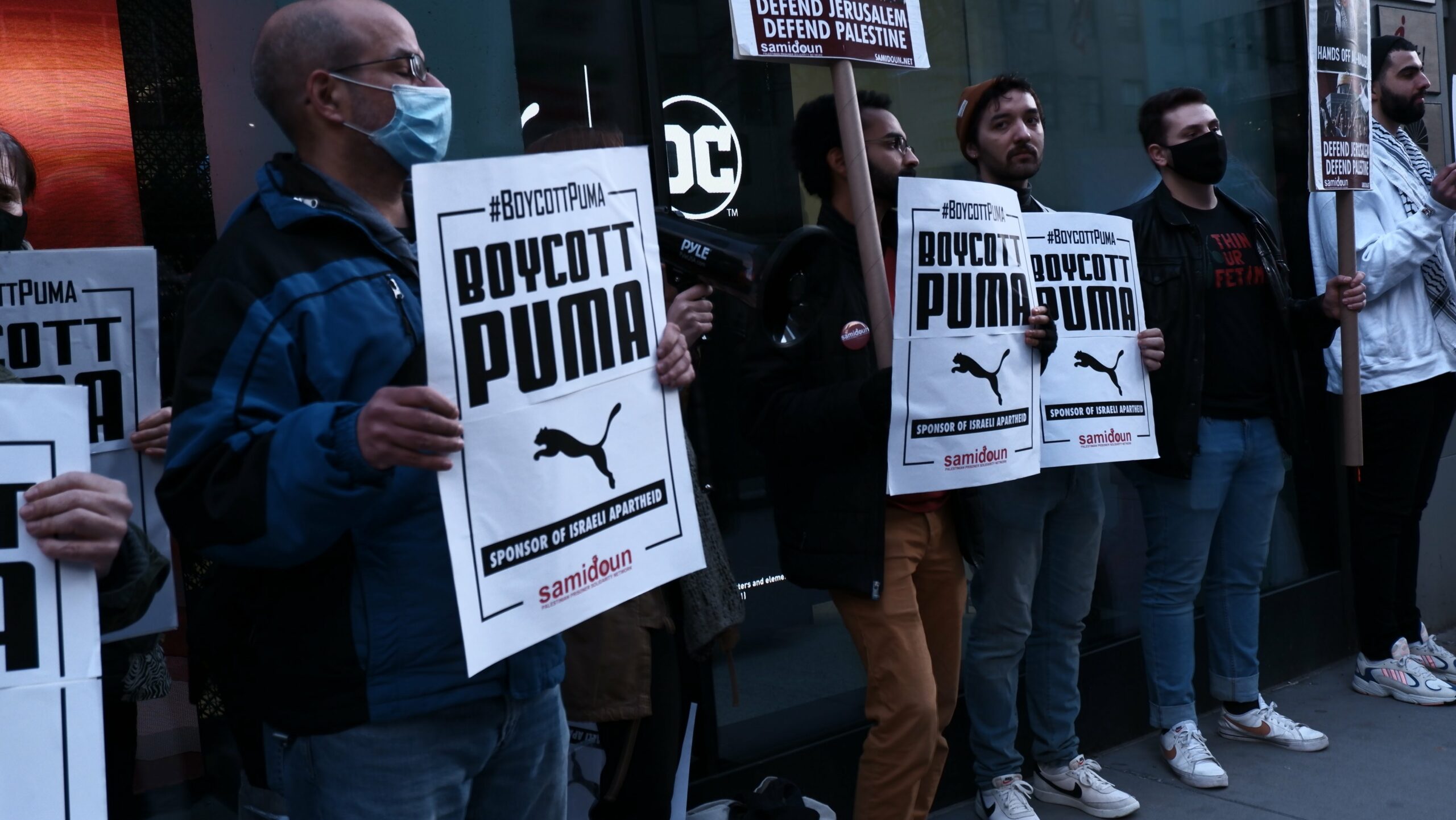 On 12 February, organizations and activists mobilized around the world to call for the boycott of PUMA. The German athletic wear manufacturer is the official sponsor of the Israel Football Association, which is not only an institution of Zionist colonialism and sportswashing of apartheid, but also includes six teams based in illegal settlements in the West Bank of Palestine.

Over 200 Palestinian sports clubs have urged a PUMA boycott until the company ends its economic sponsorship and political and moral support for Israeli colonialism, occupation and apartheid. 12 February marked the sixth global day of action in the campaign to boycott PUMA. As the existing contract between the IFA and PUMA ends in June 2022, it is particularly important to denounce PUMA’s complicity and make it clear that this contract must end immediately and not be renewed.

Samidoun network chapters and member organizations participated in the day of action in various locations around the world, including in Toulouse, Paris, Gothenburg and New York City, joining many activists and campaigners in a united call to end corporate complicity in and profiteering from colonial occupation.

In Copenhagen, Denmark, Boykot Israel activists distributed hundreds of flyers at Nørrevold, highlighting PUMA’s involvement in Israeli apartheid. Boykot Israel has also written to over 100 shops selling PUMA products calling on them to stop marketing the athletic wear company’s goods so long as it continues to sponsor the IFA.

In Gothenburg, Sweden, Samidoun Göteborg distributed flyers outside an athletic wear shop, meeting with a warm reception from passers-by who were very troubled to learn of the connections between PUMA and Israeli colonialism.

In New York City, Samidoun NY/NJ joined with Within Our Lifetime and the Palestinian Youth Movement NY for a picket at the PUMA flagship store in Manhattan. They received energetic support from many passers-by who were appalled to learn of PUMA’s connection to Israeli colonialism.

Among other actions in the United States, there were two New England protests against PUMA demanding the company end its sponsorship of the IFA. BDS Boston protested in Somerville, Massachusetts, while Brown Students for Justice in Palestine and RISD SJP demonstrated in Providence, Rhode Island.

In Canada, over 1,000 people have already signed on to a call to action to Puma Canada and Puma North America, led by the Canadian BDS Coalition, calling on them to cut the ties with IFA. To sign the letter to Puma Canada, click here.

The Collectif Palestine Vaincra in Toulouse, France, organized a Palestine Stand in central Toulouse, receiving widespread support from passers-by, who took many solidarity photos in support of the #BoycottPUMA campaign.

Also in France, Samidoun Région Parisienne also organized a Palestine Stand at the Aubervilliers market. This monthly initiative shared hundreds of flyers about the boycott of the German athletic wear manufacturer.

These accompanied actions throughout France, including in Aix-en-Provence, Saint-Etienne, Paris, Montpellier, Clermont-Ferrand, Lyon, Orleans and elsewhere organized by BDS committees calling for the boycott of PUMA until the company stops supporting apartheid Israel. 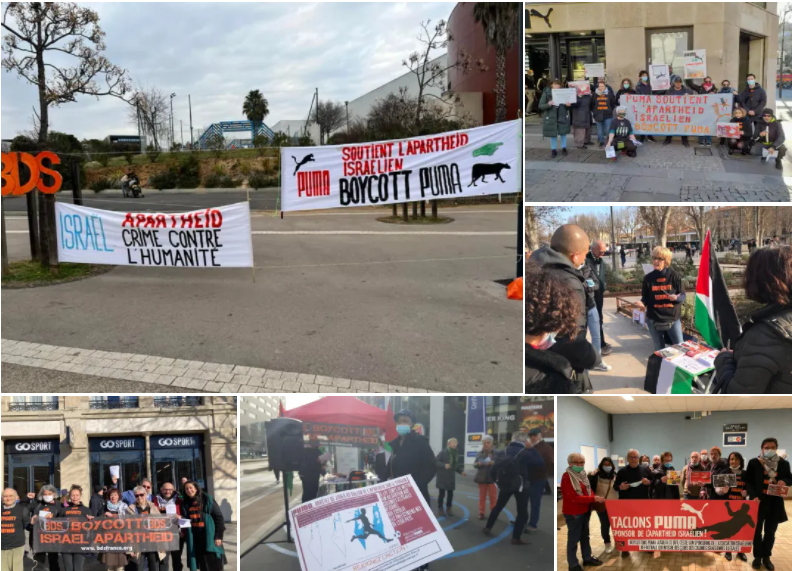 There were many actions around the world, calling for the boycott of PUMA and an end to Israeli apartheid, including a spirited London rally organized by Friends of Al-Aqsa, and Manchester Palestine Action’s occupation of the PUMA offices in the city.

These joined rallies and activities in Ireland, Malaysia, South Africa and many other countries, carrying the unified call against PUMA’s complicity in and sponsorship of Israeli colonialism and war crimes, amid ongoing attacks on al-Naqab, Jerusalem, Jenin and throughout occupied Palestine. While PUMA sponsors the Israel Football Association, Palestinian footballers have been subject to imprisonment, denied the ability and right to travel, shot by snipers in the Great Return March in Gaza, and killed by Israeli bombs and bullets.

Samidoun Network members and affiliates are organizing in cities around the world to build the boycott and isolation of the Israeli regime. Contact us to find out more about how you can get involved, or download the #BoycottPUMA posters below to share in your community: 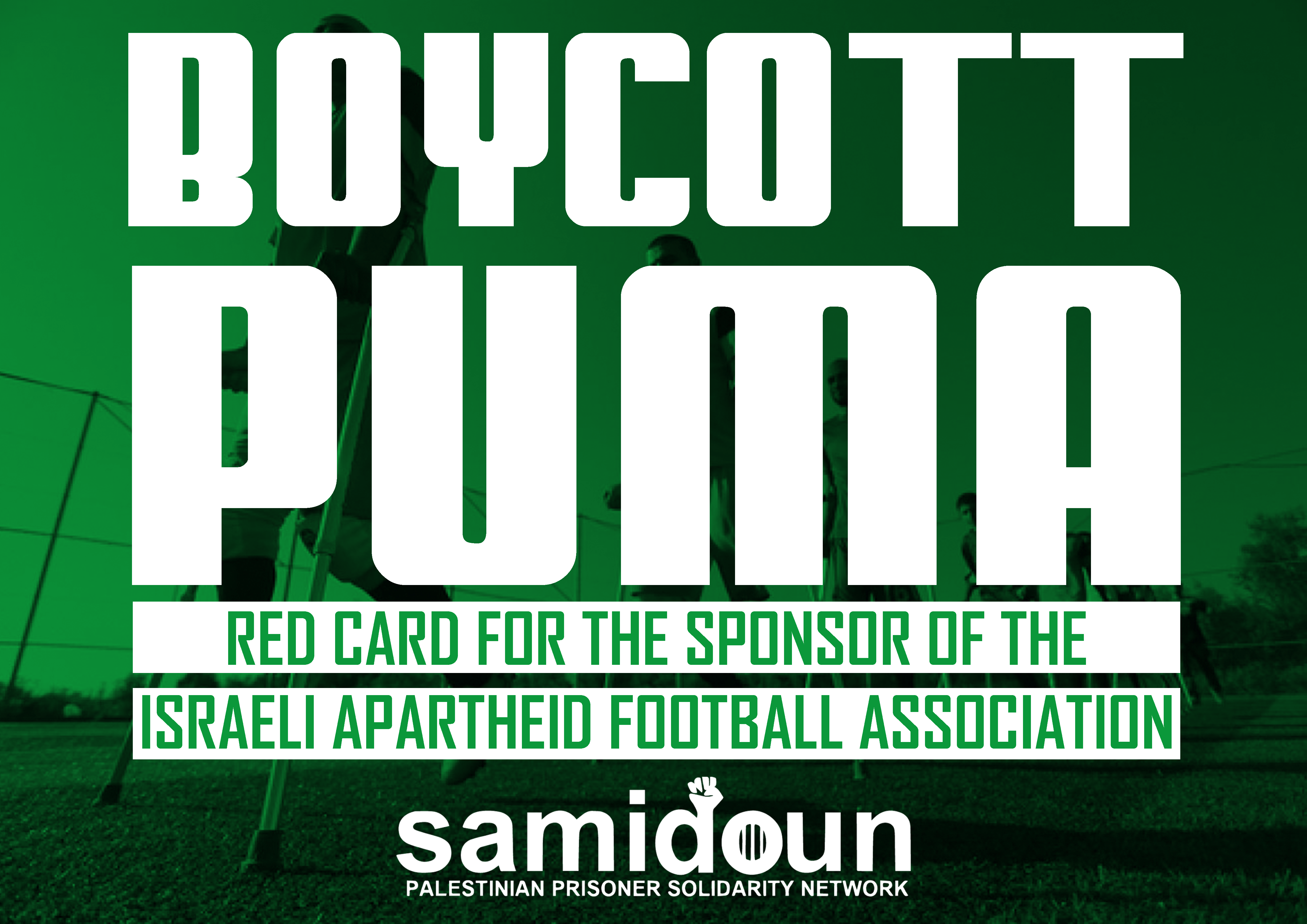 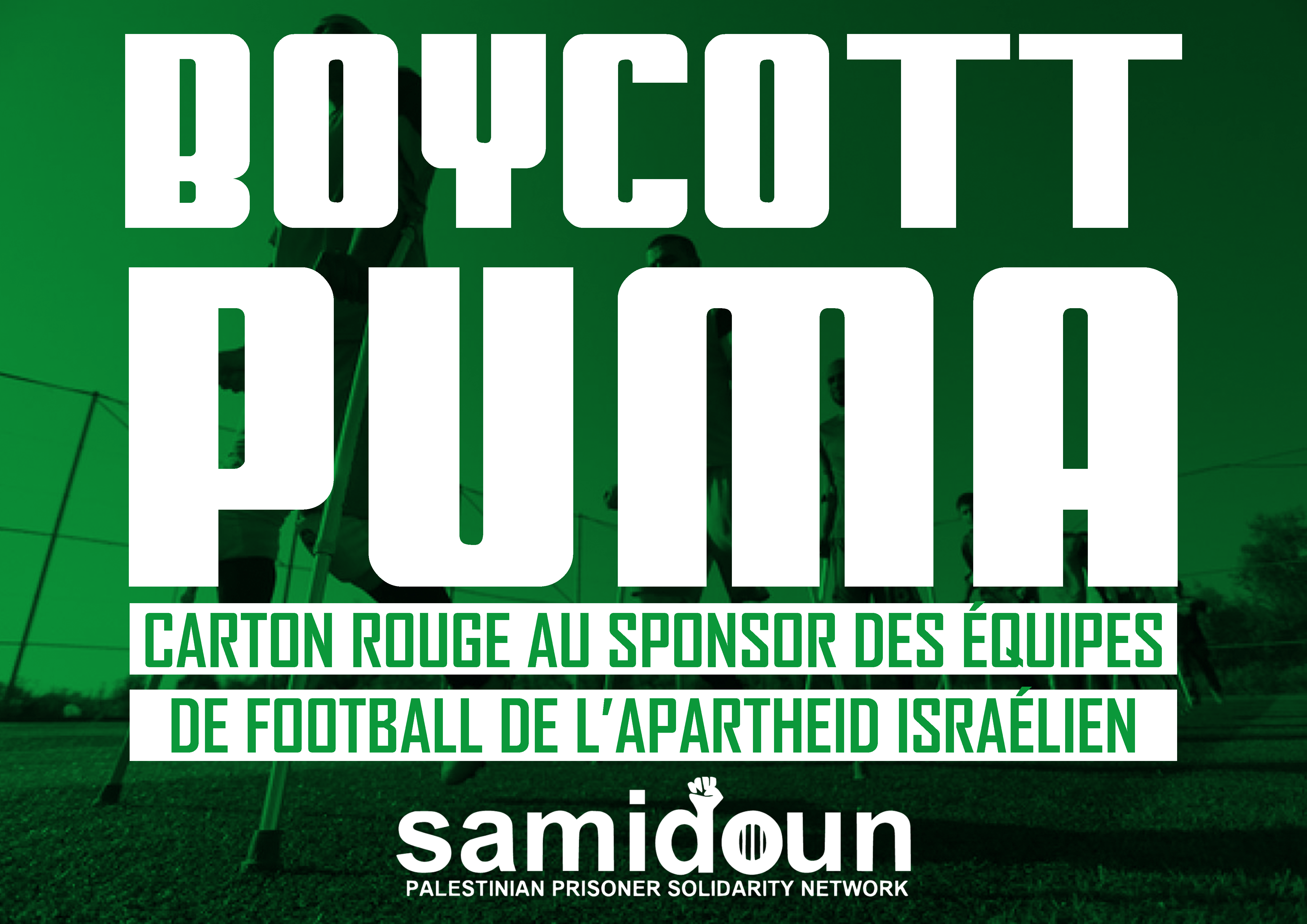 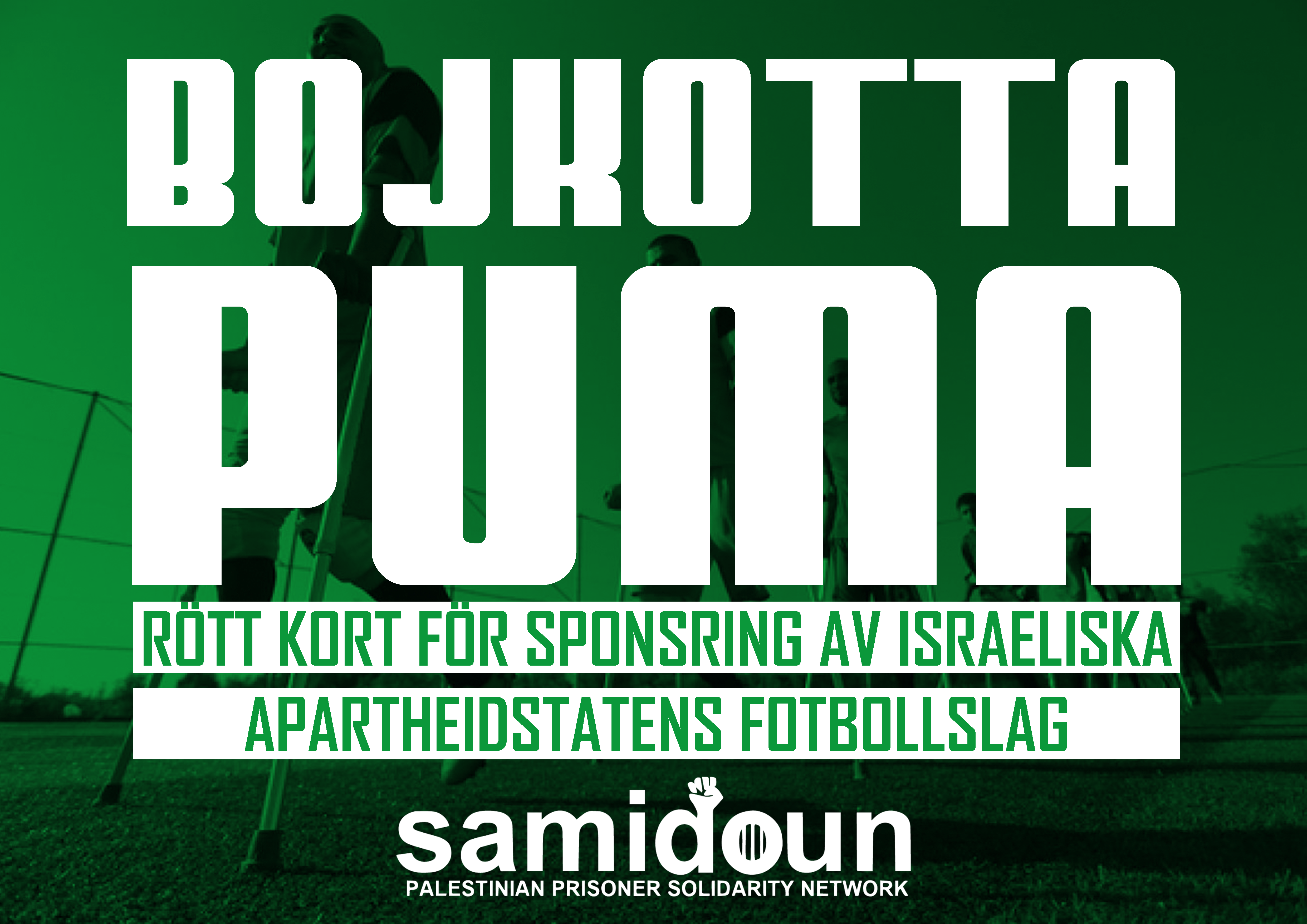