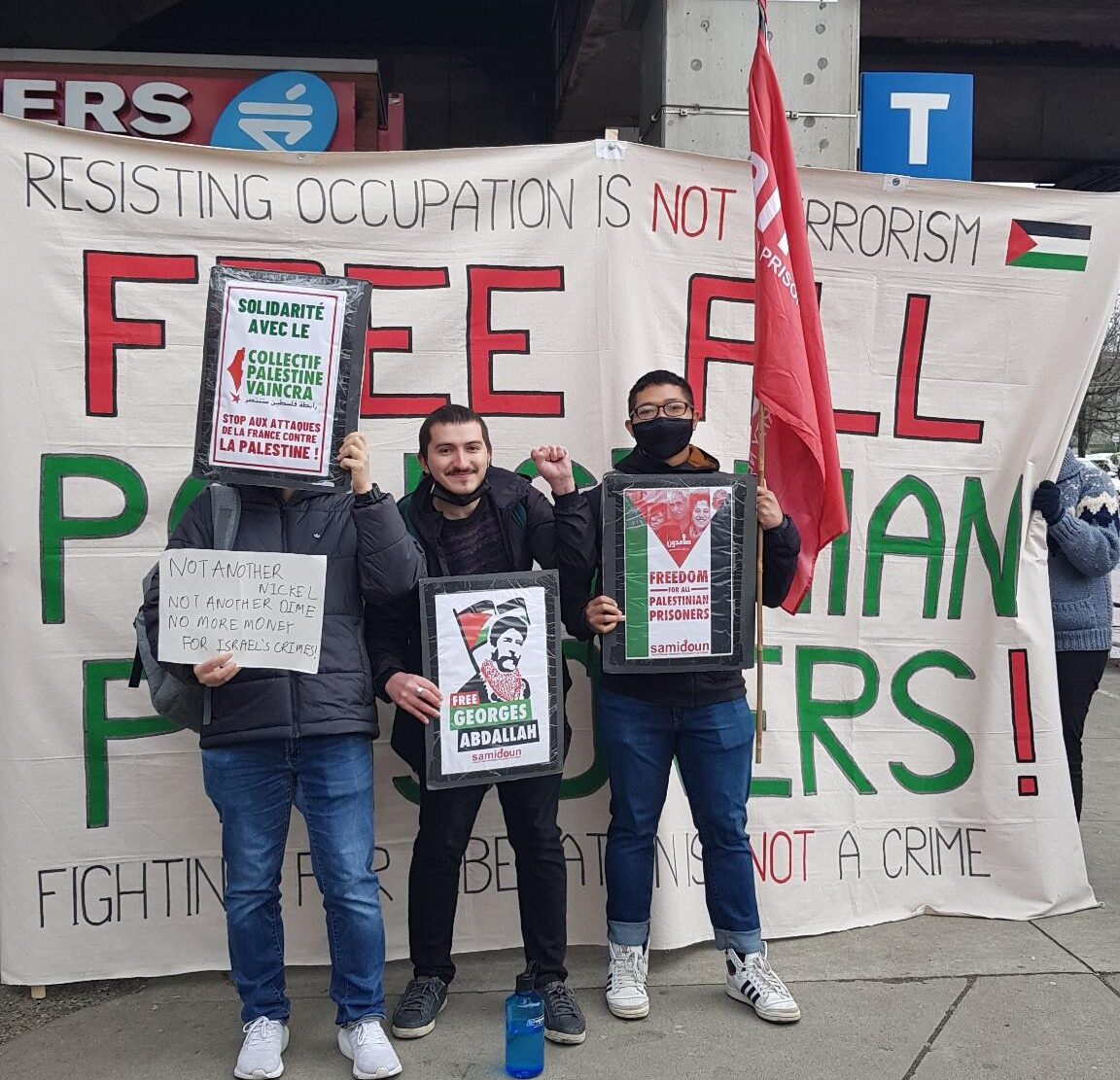 On Saturday, 26 March, activists in Vancouver gathered at the Broadway/Commercial Skytrain station for a Palestine Stand highlighting the 46th anniversary of Land Day, the campaign to boycott “Israeli” wines, and confronting the criminalization of Palestine activism in France and elsewhere. 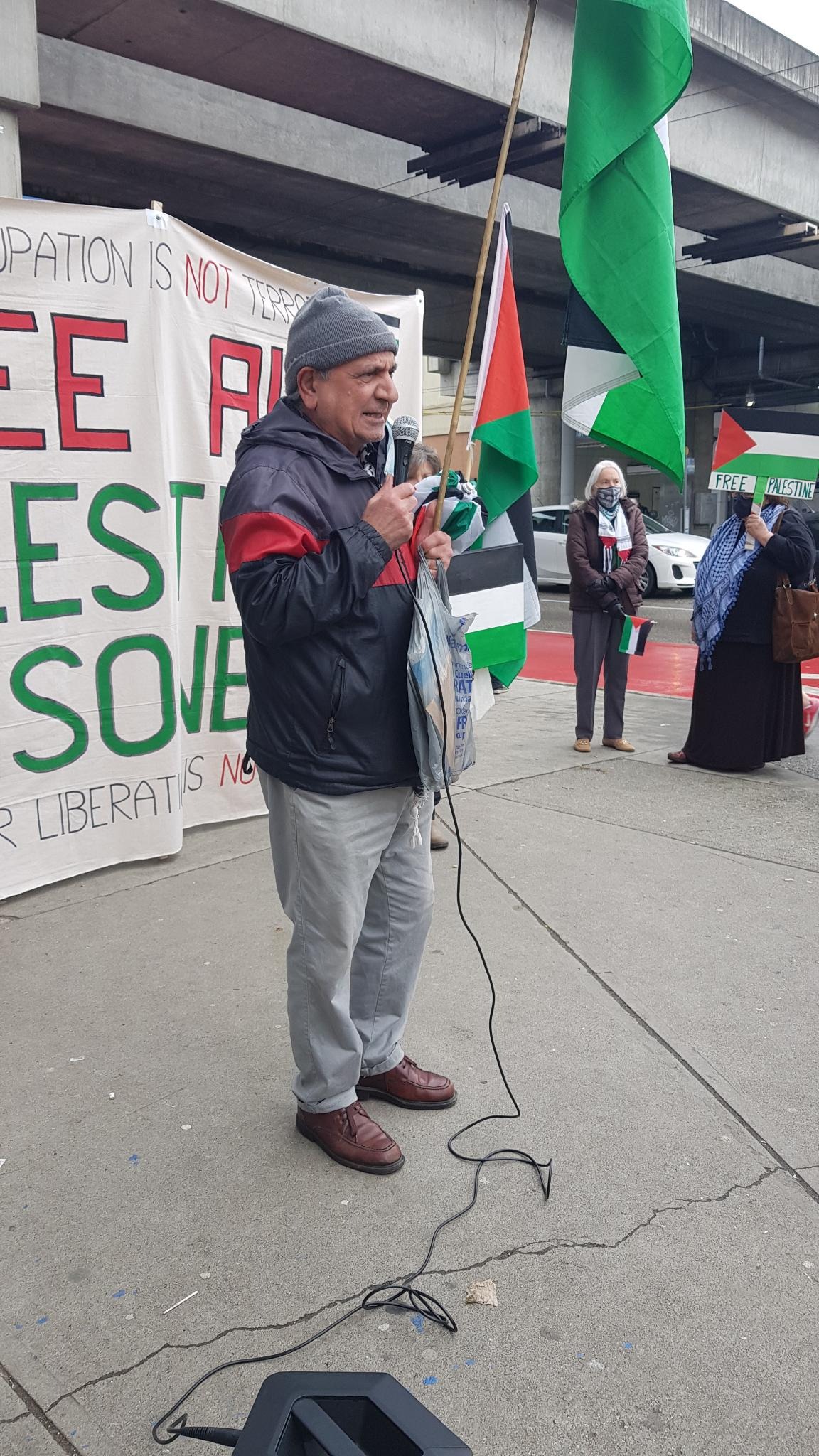 Despite the rainy weather, Palestinian flags and large banners calling to “Free All Palestinian Prisoners,” “End Israeli Apartheid” and win “Freedom for Palestine” drew attention from passers-by at the busy transit hub. Participants solicited signatures for the campaign to pull Israeli wines produced on occupied Palestinian and Syrian land from the shelves at publicly owned BC Liquor Stores. Palestinian music and songs in solidarity with Palestine from artists like Lowkey and Kofia played over the sound system. 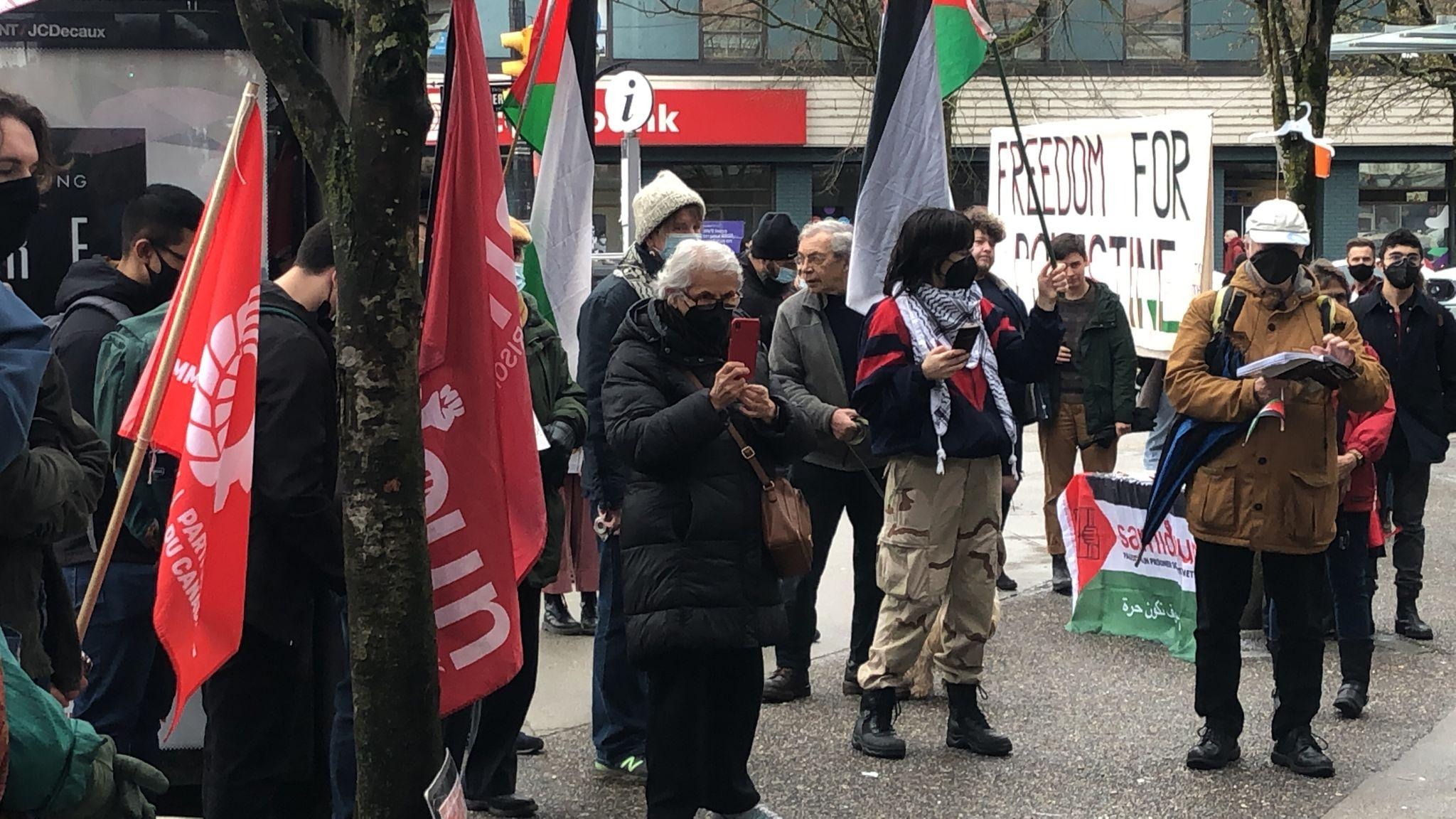 The stand was organized by Samidoun Palestinian Prisoner Solidarity Network in Vancouver together with Canada Palestine Association, BDS Vancouver – Coast Salish and the Palestinian Youth Movement. Organizations such as Independent Jewish Voices, Canada Philippines Solidarity for Human Rights, the International League of Peoples’ Struggle, the Communist Party of Canada and the Communist Party of Canada Marxist-Leninist delivered solidarity messages at the event. 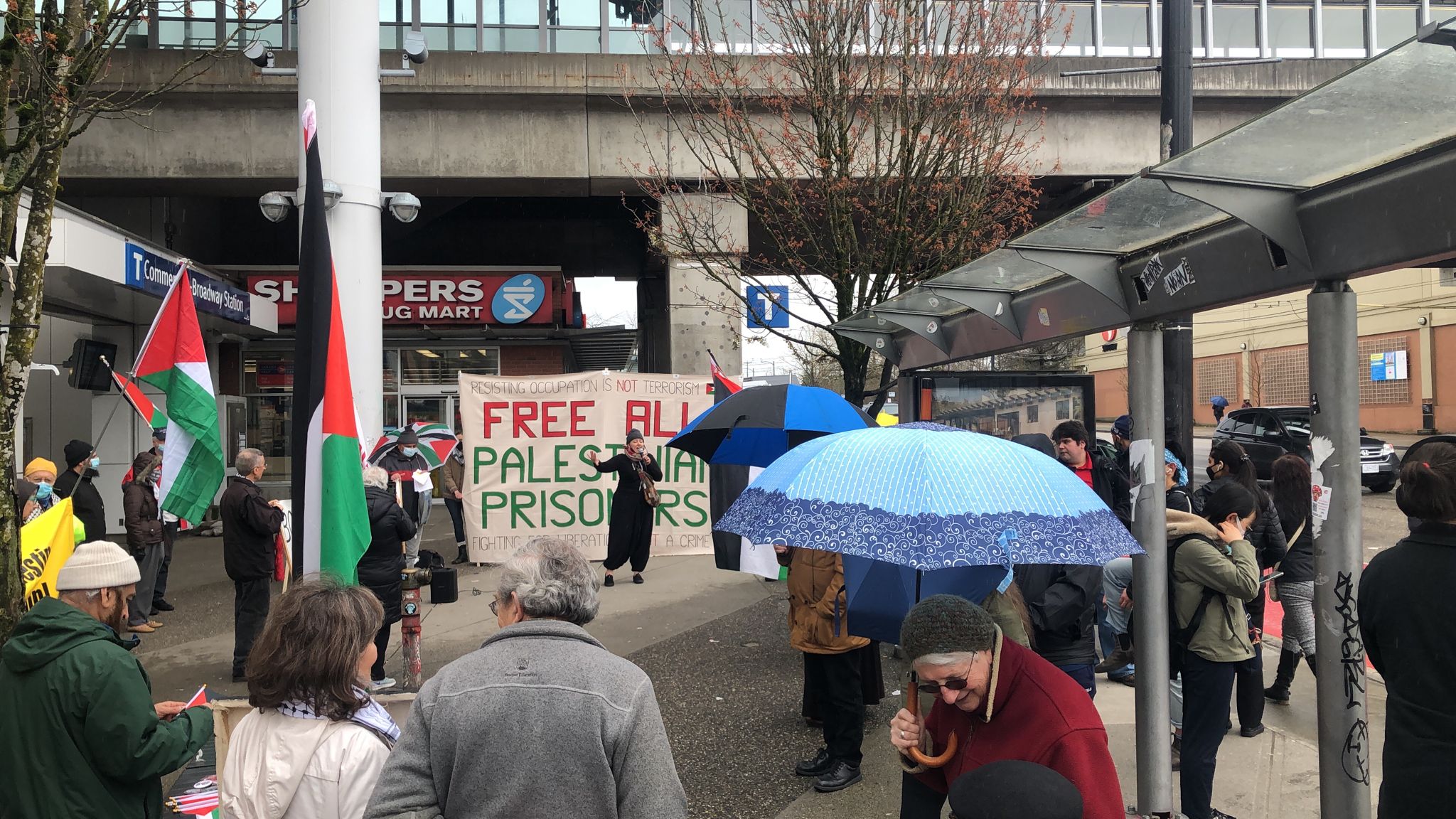 Charlotte Kates of Samidoun opened the event, highlighting the 46th commemoration of Land Day, when six Palestinians demonstrating to defend their land from Zionist colonization in occupied Palestine ’48 were shot dead by occupation forces. Since that day, Palestinians and supporters of Palestine mark Land Day to support the ongoing struggle to defend and liberate Palestinian land. She noted that the event also stands in solidarity against Canadian settler-colonialism and in support of Indigenous land and water defense struggles in Turtle Island, for sovereignty, self-determination and land back. 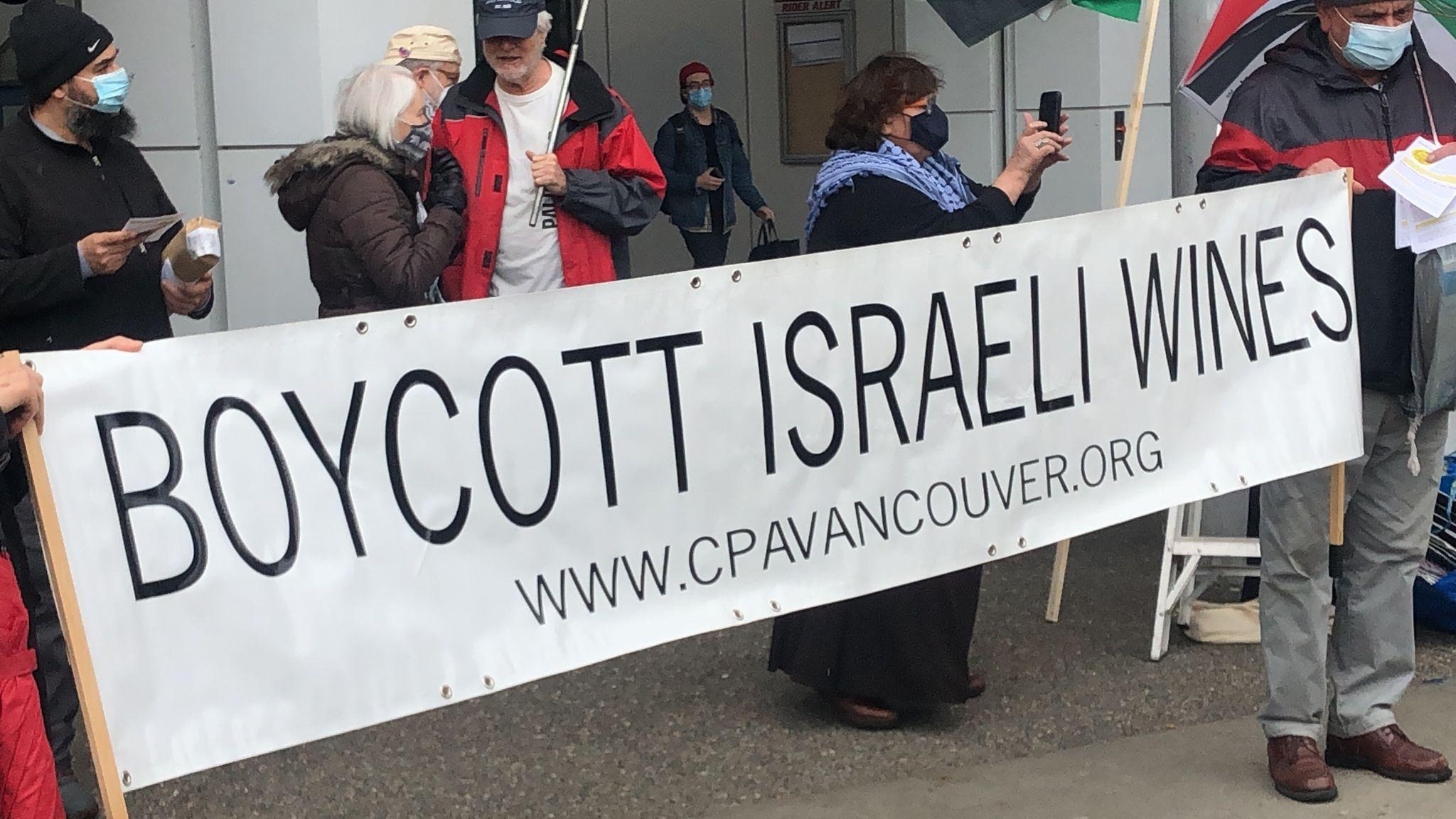 Hanna Kawas, president of the Canada Palestine Association, spoke about the campaign to boycott Israeli wines, highlighting the BC government’s double standards in pulling Russian vodka and liquor from the shelves while holding that Israeli settlement products are a valid “consumer choice.” He urged all to participate in the campaign to boycott Israeli wines and hold the BC government accountable, especially as it is governed by the NDP, which adopted a federal position against trade in settlement products. 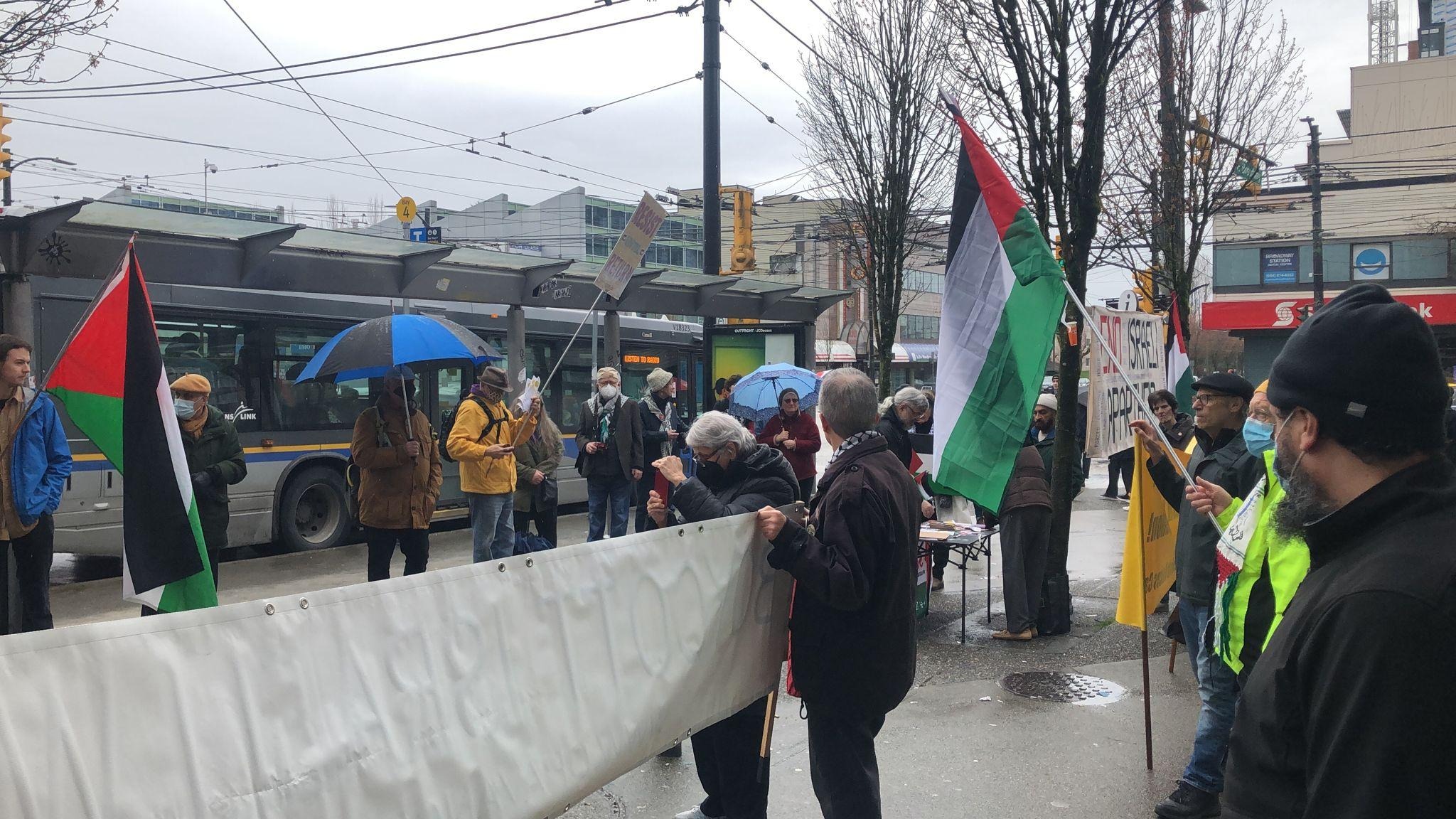 He also emphasized the importance of solidarity with the people of Yemen, noting that this demonstration fully supports the days of action in solidarity with Yemen, including the demand that Canada stop selling weapons to Saudi Arabia.  He also emphasized how strongly the Yemeni people have repeatedly affirmed solidarity with Palestine despite the horrific siege and brutal war imposed upon them by Arab reactionary regimes at the behest of the U.S., Canada and other imperialist powers. 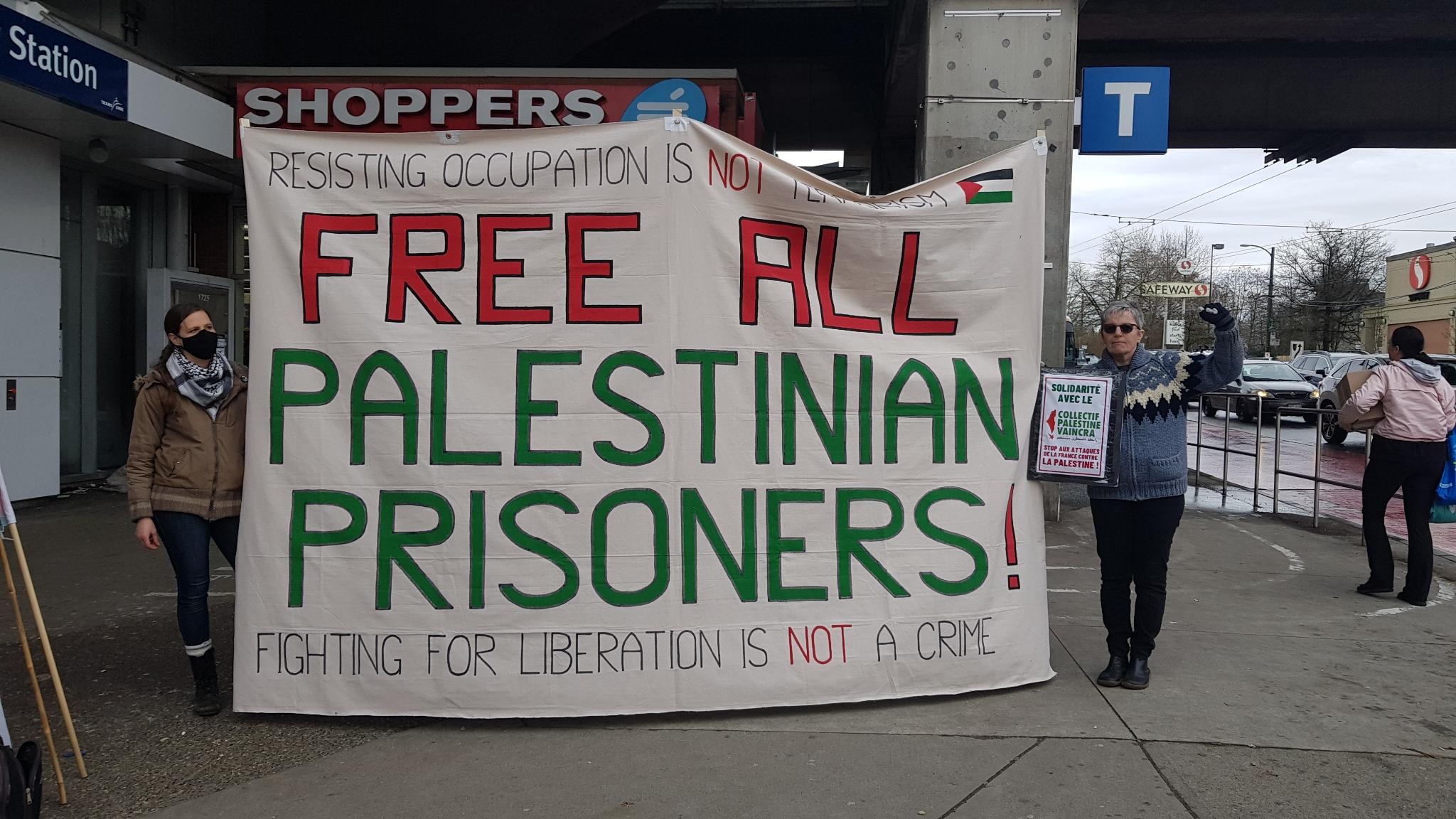 Samidoun activists spoke about the current struggles of Palestinian political prisoners, noting that there are over 4,650 Palestinians currently imprisoned in Israeli occupation prisons, including approximately 500 jailed without charge or trial under administrative detention. The administrative detainees are currently boycotting the Israeli occupation military courts and have been since 1 January 2022 and demand an end to this system of injustice. 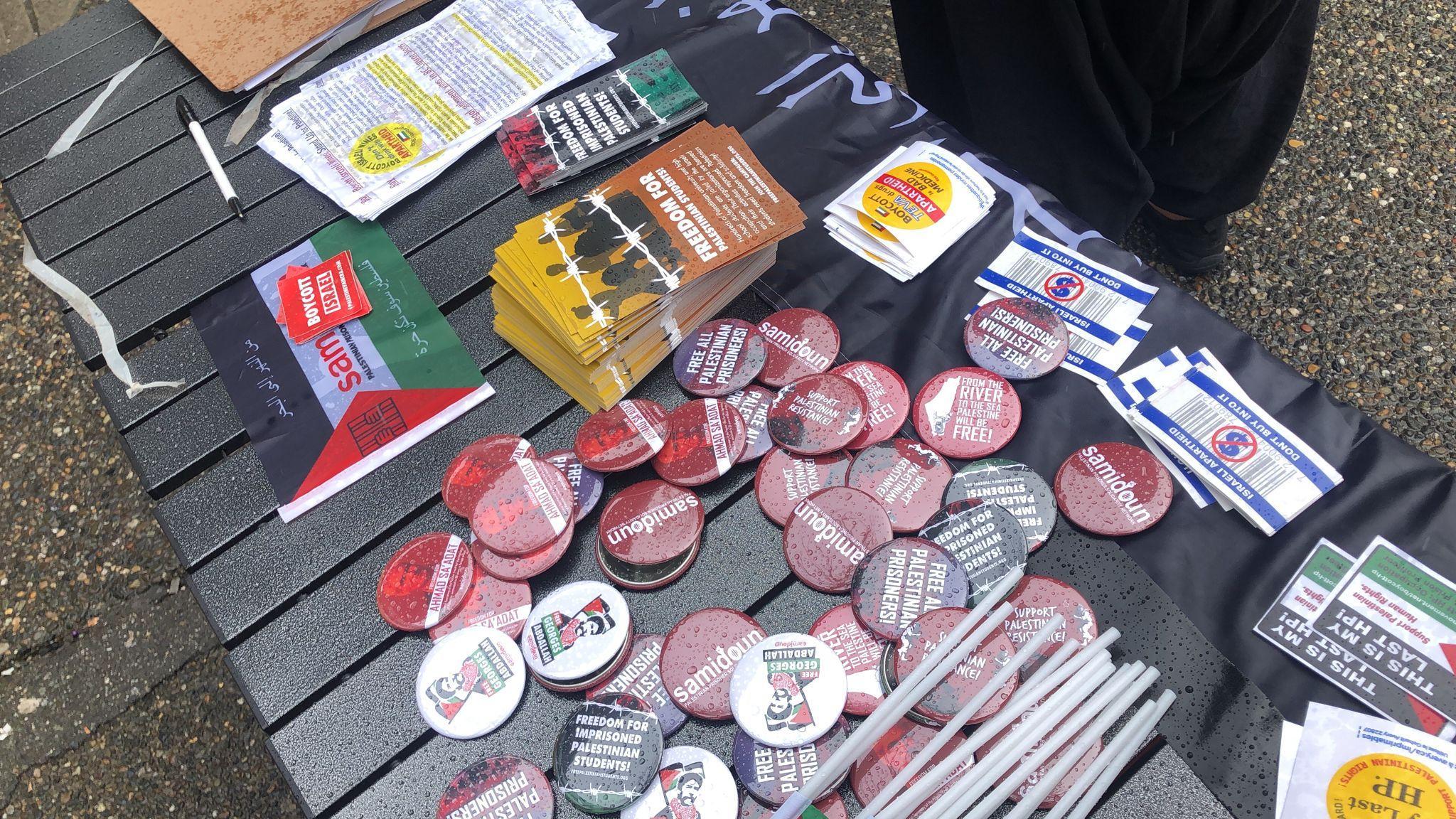 Speakers from BDS Vancouver – Coast Salish, Independent Jewish Voices and Canada Philippines Solidarity for Human Rights emphasized the importance of collective solidarity in defending Palestinian rights, holding the Canadian government accountable and confronting imperialism and the use of so-called “terror” designations to repress popular movements from Palestine to the Philippines. 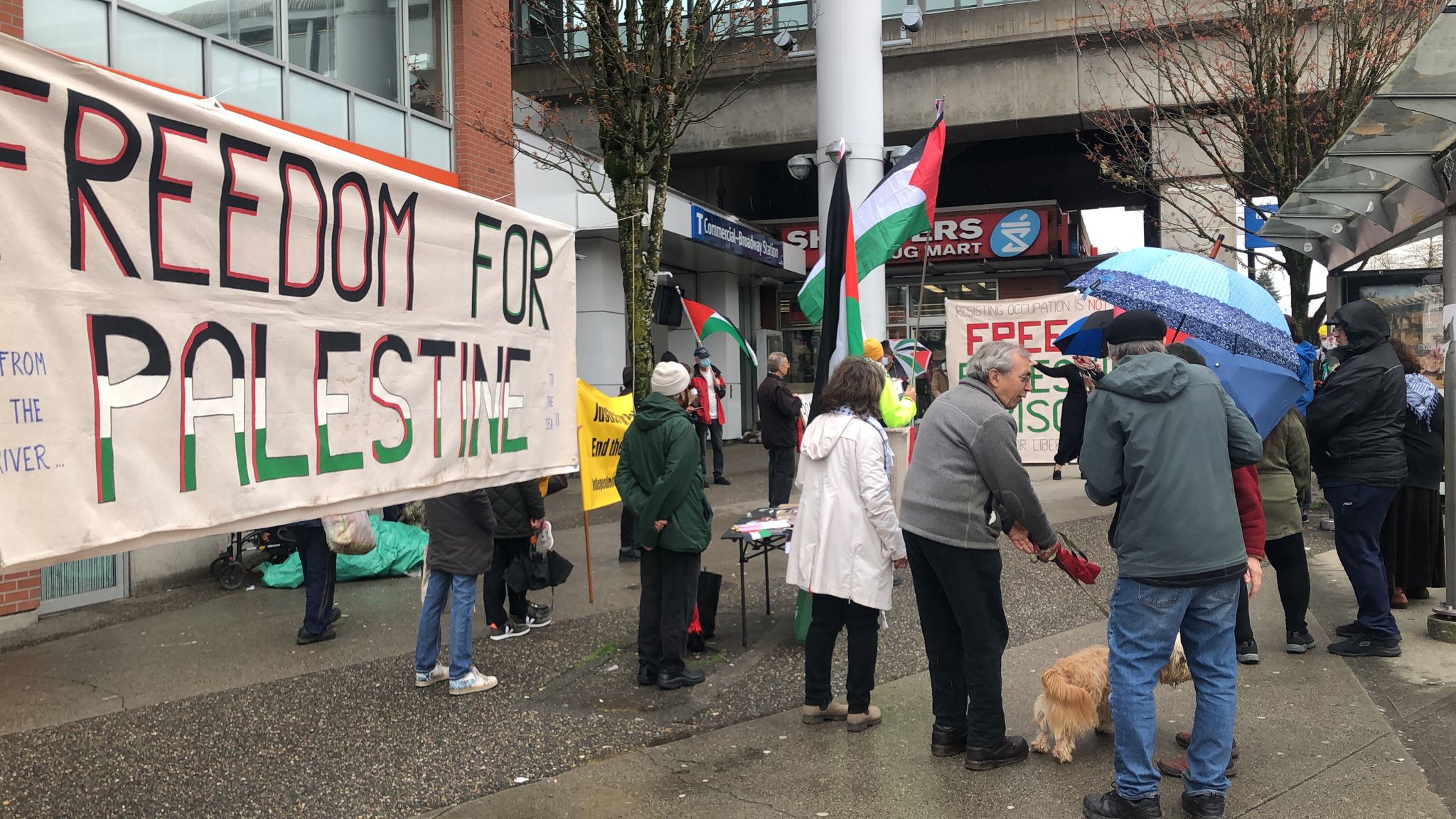 The rally also included solidarity with the Collectif Palestine Vaincra and other pro-Palestine and progressive organizations facing “dissolution” or banning by the French government. Participants took solidarity photos with signs in English, French and Arabic against the dissolutions and in defense of Palestinian rights. A speaker from La France Insoumise, the French left political movement, spoke about France’s role in Palestine and the need to hold the government accountable for its alignment with Israeli oppression and colonialism.

Dozens of people signed letters to BC members of the legislative assembly calling on the government to act and pull Israeli wines from BC liquor stores as part of the action, and hundreds of flyers about the campaign to boycott Israeli wines and the campaign to free imprisoned Palestinian students were distributed to passers-by. 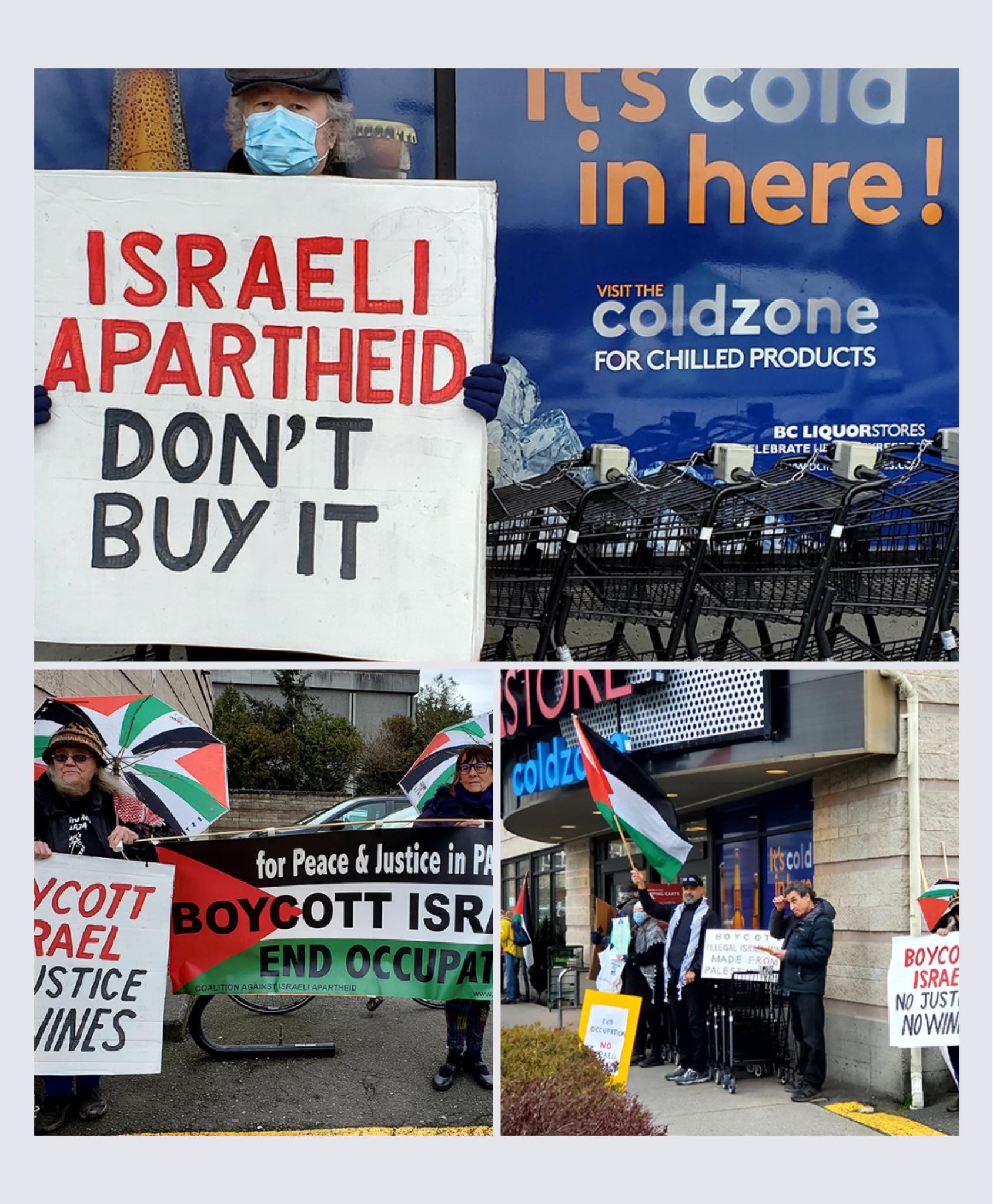 An action in Victoria, Vancouver Island, was also organized by the Coalition Against Israeli Apartheid (CAIA) Victoria outside a BC Liquor Store. Activists reached out to passers-by to inform them about how BC Liquor Stores are involved in war crimes against the Palestinian people by selling these wines from stolen land, and called on people to sign on to the letter campaign. 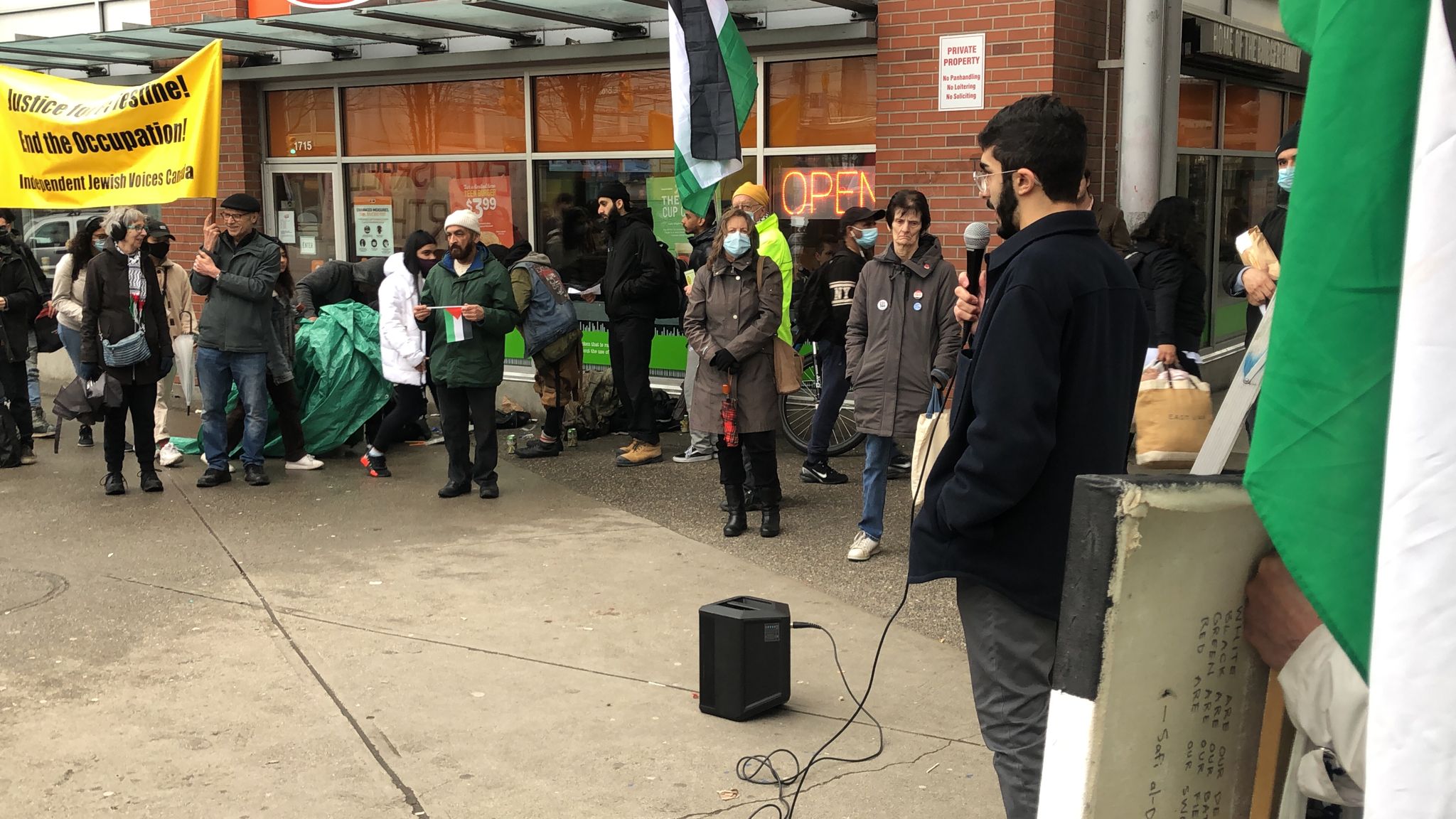