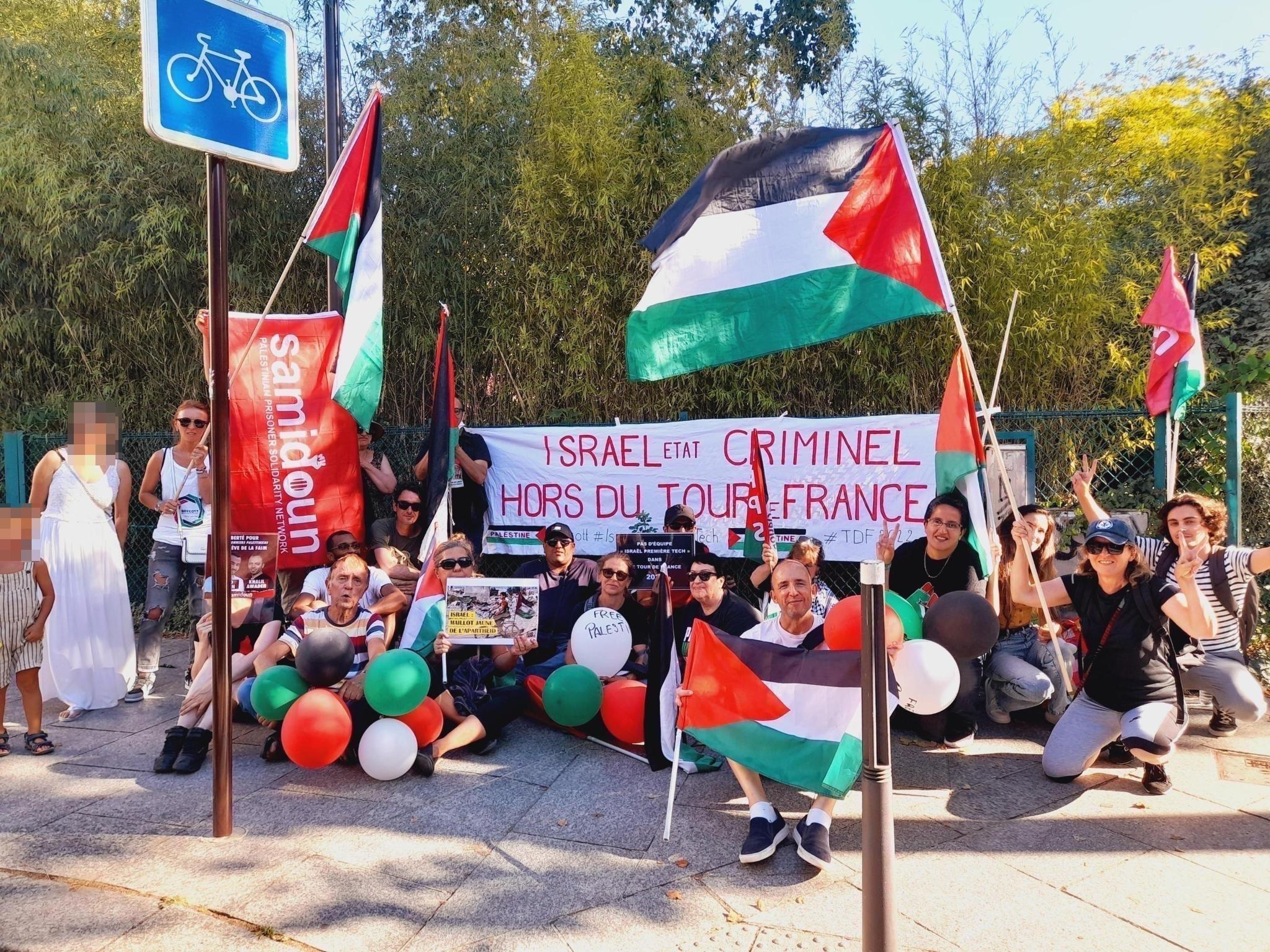 On Sunday 24 July, the final stage of world-famous cycling race, the Tour de France 2022 took place near Paris. Once again, the Tour de France was marked by the participation of a team in the colors of apartheid, with the sole aim of whitewashing the colonialist, racist and murderous policy of the Zionist state.

The Boycott Apartheid Israel Collective, EuroPalestine, AFPS, UJFP and Samidoun Région Parisienne were present along the route to show the support of the inhabitants of Île-de-France for the Palestinian people and their resistance.

As they gathered to demonstrate, about fifteen police officers prevented the supporters of justice in Palestine from reaching their planned site on the sidelines of the Tour. They were stopped and confined, subjected to identity checks, pressured to leave… for more than 2 hours, they were kept away from other spectators.

All of this repression is an admission of weakness on the part of the supporters of the Israeli occupation! A dozen Palestinian flags and bunches of balloons are enough to make them panic. At the same time, many people did not hesitate to show their support, coming to talk with us, shouting supportive slogans for Palestine or greeting the demonstrators even as they were being corralled by cops.

On the same day, two other groups managed to position themselves on the course and raise the Palestinian colors high. The first in Puteaux by the AFPS and their supporters, and a second in front of La Sorbonne.

The day before, messages of solidarity with the Palestinian people and for the boycott of Israel were seen in Nanterre on the route of the Tour. The slogans remained visible for several days.

Throughout the route of the Tour de France, many waved the Palestinian flag high and also held up the many portraits of the prisoners of the Palestinian cause currently imprisoned in Israeli occupation prisons — or in France —  such as Ahmad Sa’adat, Salah Hamouri, Georges Abdallah , Raed Rayan and Khalil Awawdeh. Everywhere, the supporters of Palestine, the Palestinian people and their resistance, mobilized to oppose the sportswashing of the Zionist state.

We salute all the organizations, collectives and individuals who have made all these acts of solidarity flourish all over France. From the river to the sea, Palestine will be free!