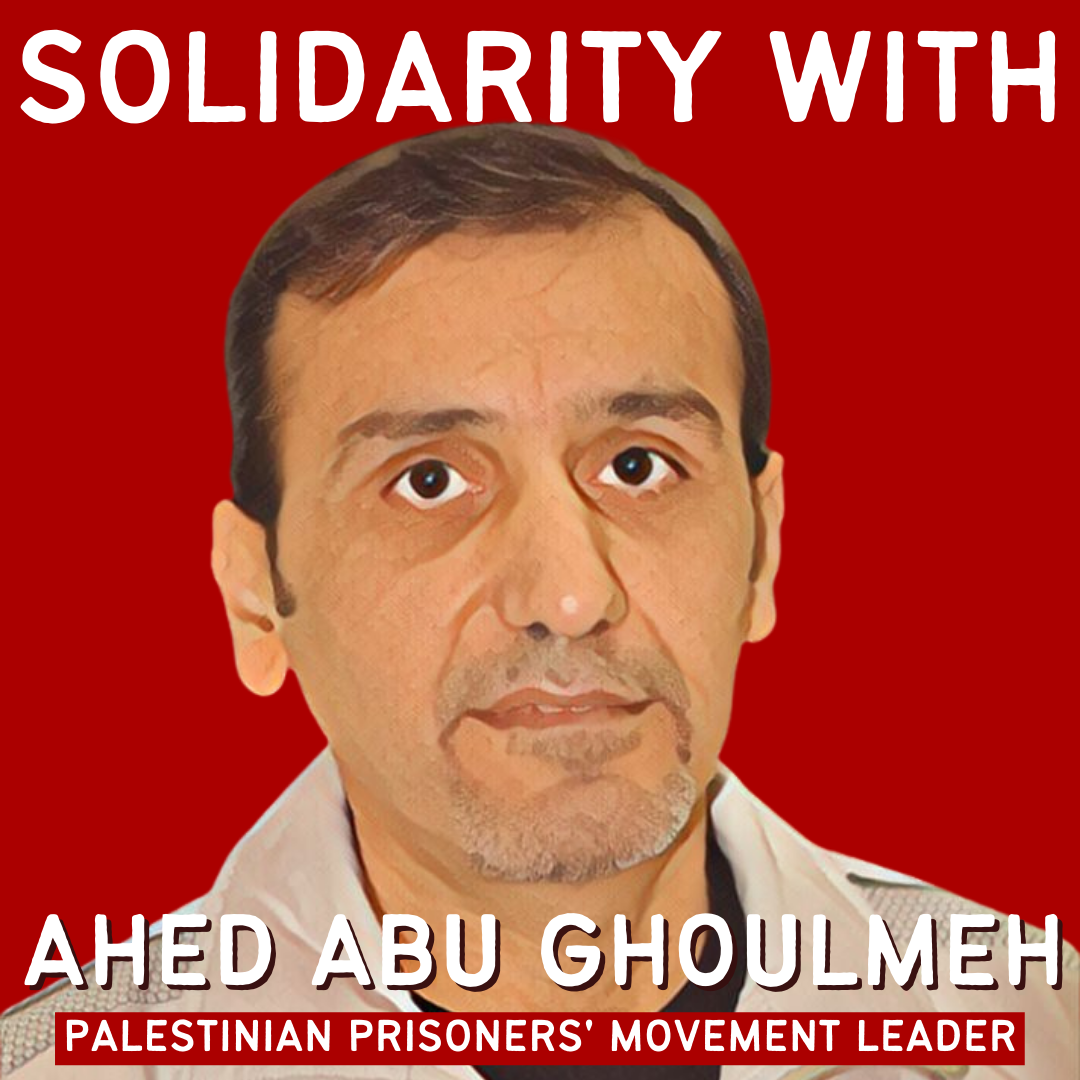 Ahed Abu Ghoulmeh, imprisoned Palestinian leader, was suddenly transferred to interrogation at the Petah Tikvah interrogation center of the occupation one week ago, on Thursday, 21 July.

On Thursday, 28 July, Palestinian lawyer Ghaid Qassem reported that she had finally visited Abu Ghoulmeh, who was now being held in Megiddo prison, after repeated prohibitions of legal visits over the course of the previous week. Abu Ghoulmeh’s family, his comrades in the Popular Front for the Liberation of Palestine, and Palestinian prisoners’ associations have called for urgent action and attention to shine a light on Abu Ghoulmeh’s case and protect him from the attacks of the occupation.

The lawyer reported that she was allowed to visit him for only 15 minutes and that Abu Ghoulmeh appeared physically exhausted after being transferred on multiple occasions from interrogation center to prison and again in the so-called “bosta,” the all-metal vehicle used to transport Palestinian prisoners, typically without air conditioning in the extreme summer heat. She affirmed that despite attempts to block his communication and the frequent transfers, his spirits are high and his will is solid.

On 21 July, occupation forces suddenly transferred Abu Ghoulmeh from the Ramon desert prison to the Petah Tikva interrogation center. His family and fellow prisoners were not informed of his location, and the transfer comes after two of his nephews were recently seized by occupation forces invading his hometown of Beit Furik. He was held in the interrogation center until Wednesday, 27 July, when he was transferred first to HaSharon prison and then to Megiddo prison.

Wafa’ Abu Ghoulmeh, Palestinian activist and Abu Ghoulmeh’s wife, reported that numerous lawyers and human rights organizations had called to inquire about Abu Ghoulmeh’s condition with the occupation authorities, who insisted that he was in Ramon prison even though he had been moved to interrogation. She told Palestinian media that, “the occupation refuses to acknowledge that Ahed is being held under interrogation, and we as a family see that this poses a great danger to Ahed’s life.” She urged “everyone to act immediately, before it is too late, becaue what is happening is dangerous, and it is possible to repeat the same scenario that happened with the prisoners Samer Arbeed and Walid Hanatsheh during their interrogation.” Both Arbeed and Hanatsheh were subjected to severe physical torture under interrogation in 2019, to the extent that Arbeed was beaten so badly that 11 of his ribs were broken and he was in a coma.

In a statement, the PFLP said that the transfer of Abu Ghoulmeh to interrogation is part of a systematic attack against the prisoners and a policy of revenge that aims to harm the prisoners, especially leaders of the movement, especially as dozens of Palestinian prisoners joined a collective hunger strike in support of long-term hunger strikers Khalil Awawdeh and Raed Rayan, striking to end their imprisonment without charge or trial under administrative detention. (Rayan ended his hunger strike on 28 July with an agreement for his release in November.) They further saluted Abu Ghoulmeh’s reputation for steadfastness under interrogation and in solitary confinement on many past occasions, affirming that he would again defeat the jailer.

The Palestinian Prisoners’ Society declared that the occupation is fully responsible for the life of Abu Ghoulmeh, especially after lawyer visits were repeatedly obstructed, noting that he is a national leader of the prisoners’ movment.

Samidoun Palestinian Prisoner Solidarity Network expresses our firm solidarity with Ahed Abu Ghoulmeh, a leader of the prisoners’ movement and a renowned example of resistance and steadfastness behind the bars of the occupation.

The interrogation of Abu Ghoulmeh comes alongside the refusal to transfer hunger strikers like Khalil Awawdeh to civilian hospitals, the repeated transfers and isolation imposed on the heroes of the Freedom Tunnel who liberated themselves from occupation prisons last September, the isolation of French-Palestinian lawyer Salah Hamouri after he appealed to the French government to end his detention, the isolation of Shadi Maali in an attempt to pressure his son, and the solitary confinement of Ahmad Manasra, imprisoned since he was a child.

Who is Ahed Abu Ghoulmeh?

Wafa’ and Ahed have two children, Qais and Rita. He was born in 1968 in Beit Furik, near Nablus, and was elected as the head of the prison branch of the Popular Front for the Liberation of Palestine in June of this year. He is serving a life sentence plus 5 years after being jailed by an occupation military court, accused of directing the assassination of the notoriously racist tourism minister of the occupation, Rehavam Ze’evi, in October 2001, in retaliation for the Israeli assassination of PFLP General Secretary Abu Ali Mustafa in August 2001.

As a high school student, he founded the Union of Secondary Student Committees in his village in 1982 and was first arrested in 1984 for organizing demonstrations to commemorate the anniversary of the PFLP’s launch. In 1986, he began to attend Bir Zeit University, but his education was repeatedly disrupted due to repeated arrests and detention. He was heavily involved in the great popular intifada, organizing popular committees and action groups in the Nablus area. After being arrested in 1990, he was transferred to administrative detention for a year. When he returned to university, he became a leader of the Progressive Student Action Front.

As a leader of the Popular Front throughout the 1990s, he was repeatedly pursued by the Israeli occupation, even as he completed his university degree, married and had two children. He was particularly active in defense of the Palestinian prisoners, representing the PFLP in the committee of National and Islamic Forces on prisoners and detainees.

He was repeatedly imprisoned and arrested by the Palestinian Authority under “security coordination” with Israeli occupation, in both January and December 1996, when he was jailed for five months, and again in May 2000. With the outbreak of the Al-Aqsa Intifada in 2000, Abu Ghoulmeh played a leading role and he was publicly announced as a target for Israeli assassination in April 2001. After the assassination of Abu Ali Mustafa and the response of the PFLP in assassinating Ze’evi, he, along with Majdi Rimawi, Hamdi Qur’an and Basil al-Asmar — and then, PFLP General Secretary Ahmad Sa’adat — was imprisoned by the Palestinian Authority in Jericho prison in a security coordination agreement, where he was held under U.S., British, Canadian and Turkish guards.

During this time, Wafa’, his wife, was subjected to house arrest four times in a row for six month periods in an effort to prevent her and their children from visiting Abu Ghoulmeh in Jericho prison. On 13 March 2006, the occupation forces attacked Jericho prison after the withdrawal of the US and British guards, kidnapping Sa’adat, Abu Ghoulmeh, Qur’an, al-Asmar, Rimawi and fellow political prisoner Fouad al-Shoubaki, today one of the oldest political prisoners in Israeli occupation prisons.

He was subjected to military interrogation for over two months, during which he was subjected to extensive physical and psychological torture as he refused to confess, and on 1 January 2008, he was sentenced by the occupation military court to a life sentence plus 5 years. He has remained a major leader of the prisoners’ movement and has been repeatedly subjected to isolation and solitary confinement, and his family have been banned on numerous occasions from visiting him. He was held in solitary confinement until 2012, when he and 19 fellow leaders of the prisoners’ movement, including Ahmad Sa’adat and Marwan Barghouti, were returned to the general population after the mass Karameh hunger strike.

His wife Wafa’ continued to be denied visits, and she saw him for the first time in 10 years in 2018.

In June 2022, the PFLP announced that he had been elected the leader of its prison branch, following decades of his leadership.