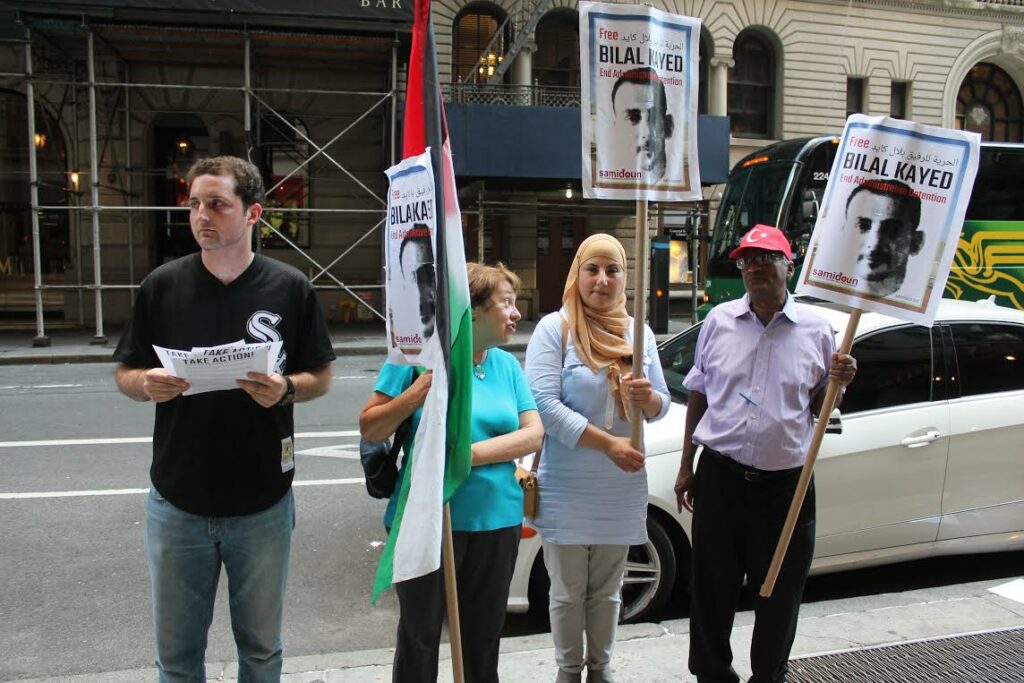 New York activists gathered outside the offices of multinational security corporation G4S on Friday, 29 July to demand freedom for hunger-striking Palestinian prisoner Bilal Kayed and that the company get out of the business of profiteering from the occupation of Palestine.

The protest on 29 July was the fourth for New York activists in the past week in support of Bilal Kayed and his fellow Palestinian prisoners, following a similar protest on 22 July, participation in the World Student Day of Action on 25 July and joining protests outside the Democratic National Convention on 26 July.

Kayed, 34, has been on hunger strike since 15 June. Arrested in 2001, he completed his 14.5-year sentence in Israeli prison on 13 June. Instead of being released as scheduled to meet his family waiting for him at an Israeli occupation military checkpoint, he was ordered to an indefinitely-renewable six months in administrative detention without charge or trial. He launched his hunger strike to demand his immediate release from detention. Dozens of fellow Palestinian prisoners have joined an open hunger strike and a series of protests to demand Kayed’s freedom; his case represents a dangerous precedent for all Palestinian prisoners of indefinite imprisonment without charge or trial after the completion of lengthy sentences.

Among the New York activists protesting on Friday was Comrade Shahid, general secretary of the Pakistan USA Freedom Forum, who spoke about escalating Indian state repression and violence against the Kashmiri people in occupied Kashmir. He also emphasized the ongoing continuity of Pakistani popular solidarity with the Palestinian struggle for national liberation, and in particular with the struggle of Bilal Kayed and his fellow Palestinian prisoners for freedom. 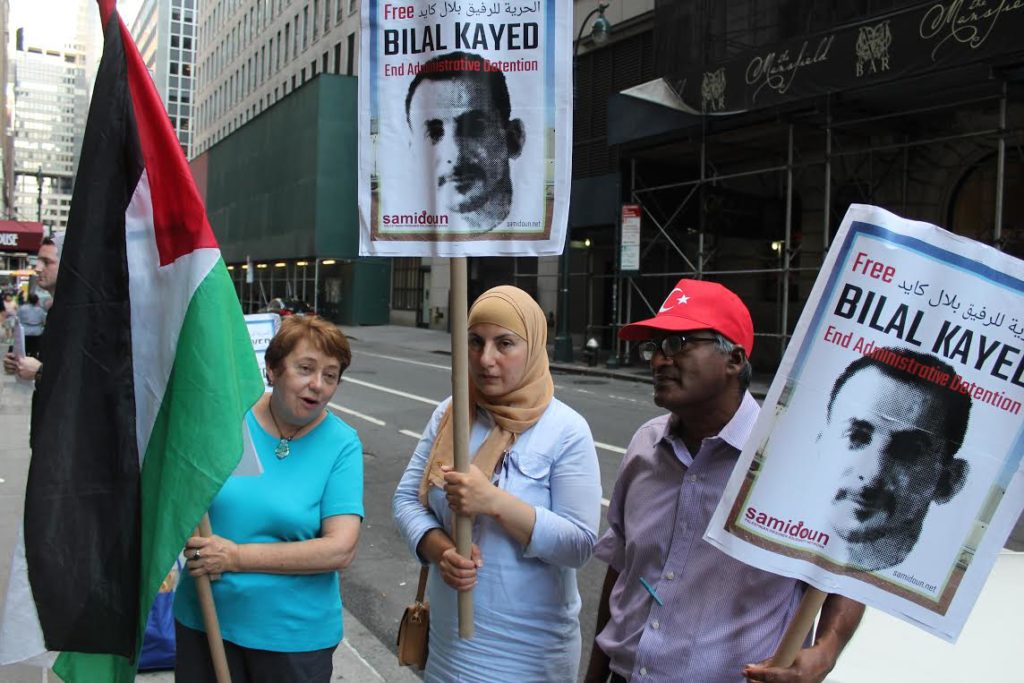 Samidoun Palestinian Prisoner Solidarity Network protests weekly outside the offices of G4S in New York City, in response to calls by Palestinian prisoners and broad segments of Palestinian society for an international boycott of the corporation. G4S provides control rooms, equipment and security systems to Israeli prisons, checkpoints, police training centers and even the Erez/Beit Hanoun crossing with Gaza, where the siege is enforced. International protests against the corporation for its role in Palestine, as well as its involvement in the imprisonment of youth and deportation of migrants in the US, UK, Australia and elsewhere, have grown as the company has lost contracts due to its involvement in human rights abuses. Most recently, the Berkeley, California city council voted to divest from private prison businesses, including G4S. While G4S has pledged to exit from its profiteering from the occupation of Palestine and other “reputationally damaging” businesses, Palestinian activists have emphasized the importance of continued pressure on the corporation.

Samidoun in New York City will protest against G4S’ profiting from occupation, and for freedom for Bilal Kayed and his fellow Palestinian prisoners, once more on Friday, 5 August at 4:00 pm outside the offices of G4S at 19 W. 44th St. in Manhattan; new participants are welcome to join the protest.