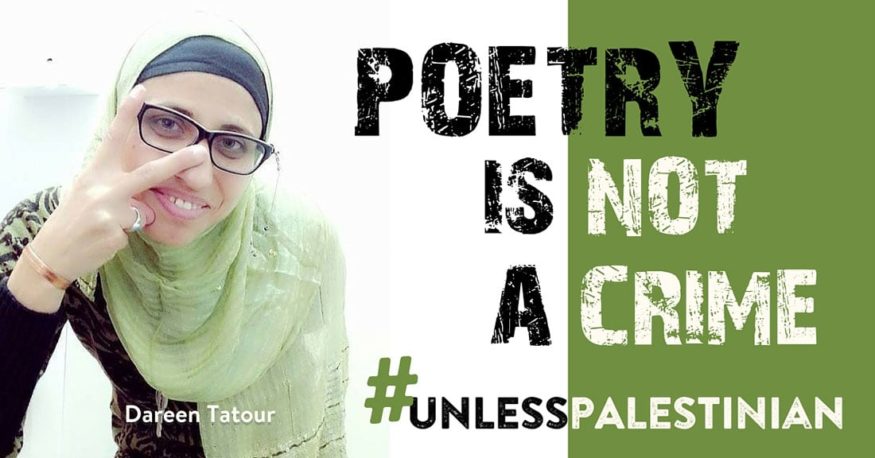 Palestinian poet Dareen Tatour, held under house arrest and on trial for publishing her poetry on YouTube and Facebook, had a court hearing in Nazareth on Sunday, 17 July. Tatour, a Palestinian citizen of Israel, has been held under house arrest for seven months – after three months’ imprisonment – accused only of her poetry, and in particular her poem “Resist, My People, Resist Them.”

Award-winning poet, songwriter, and novelist, Naomi Shihab Nye, referred to the way Tatour’s use of the word “resistance” has been criminalized: “The word “resist” – when it is resisting oppression and inequality – will always be a gleaming, beautiful, positive word. In fact, it needs to be said more often.” 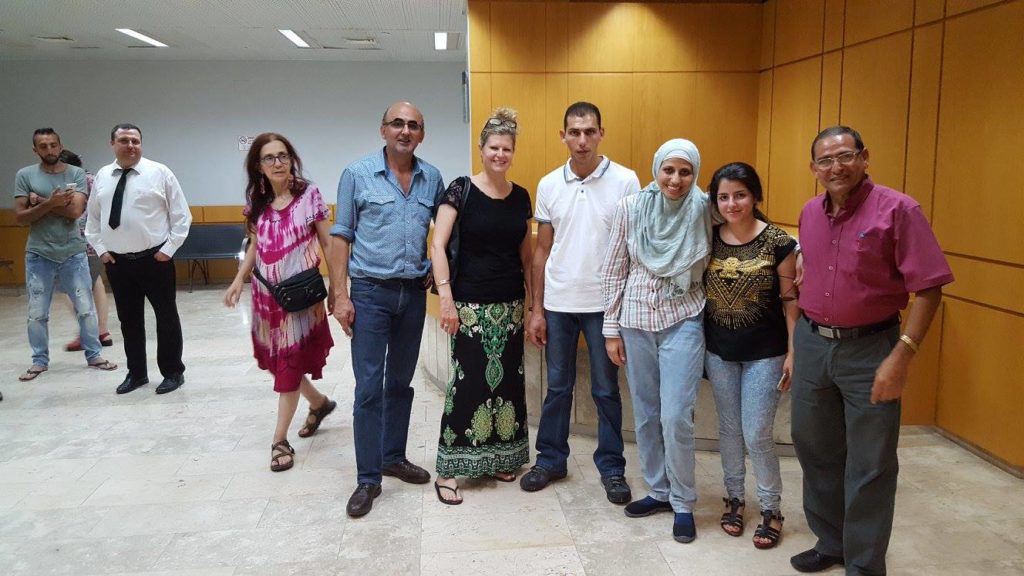 At the court hearing on Sunday, the prosecution concluded its case and the presentation of its witnesses, mostly dedicated to the discussion of Tatour’s facebook page, Youtube postings, and performance at public events. The trial will convene next on 6 September for the presentation of Tatour’s defense; in the meantime, she remains under house arrest, forbidden from using the internet, and required to be 40 km away from her hometown. Tatour is challenging the terms of her house arrest and seeking to be allowed transfer to her hometown. As Mondoweiss reported, “Tatour’s brother was obliged to quit his job and his studies in order to fulfil his role as the court appointed ward in an apartment in Tel Aviv rented for that purpose for the duration of her legal proceedings.”  Another hearing is expected on 18 July on the issue of her house confinement.

“Imprisonment is tantamount to cutting the cords of feelings and emotions whose letters connect between what they are writing and the people,” said Tatour in a letter to Jewish Voice for Peace reported in the Electronic Intifada, “and if this communication is cut there is no value to all to what is written by this poet, no matter how outstanding their style. Actually there is no value and meaning to the human existence of the individual in this democracy and basically no value to this democracy.”

Tatour is one of over 400 Palestinians arrested since last year for political statements on social media; her arrest came in a pre-dawn raid on 11 October 2015. It was only after twenty days of imprisonment that she was informed of the charges against her.  The arrest and prosecution of Tatour also comes in the context of a long history of occupation persecution of Palestinian writers and artists, including such former prisoners as Mahmoud Darwish, Samih al-Qasim and Tawfiq Zayyad, like Tatour, Palestinians from occupied Palestine ’48.

The campaign to free Tatour is growing – in addition to the new petition with the support of hundreds of literary figures, protests for Tatour’s freedom have mounted and public events in Palestine have been organized to demand her release, including protests and poetry evenings.  A Hebrew poetry magazine, Maayan, awarded Tatour its prize for “Poet in Struggle.”