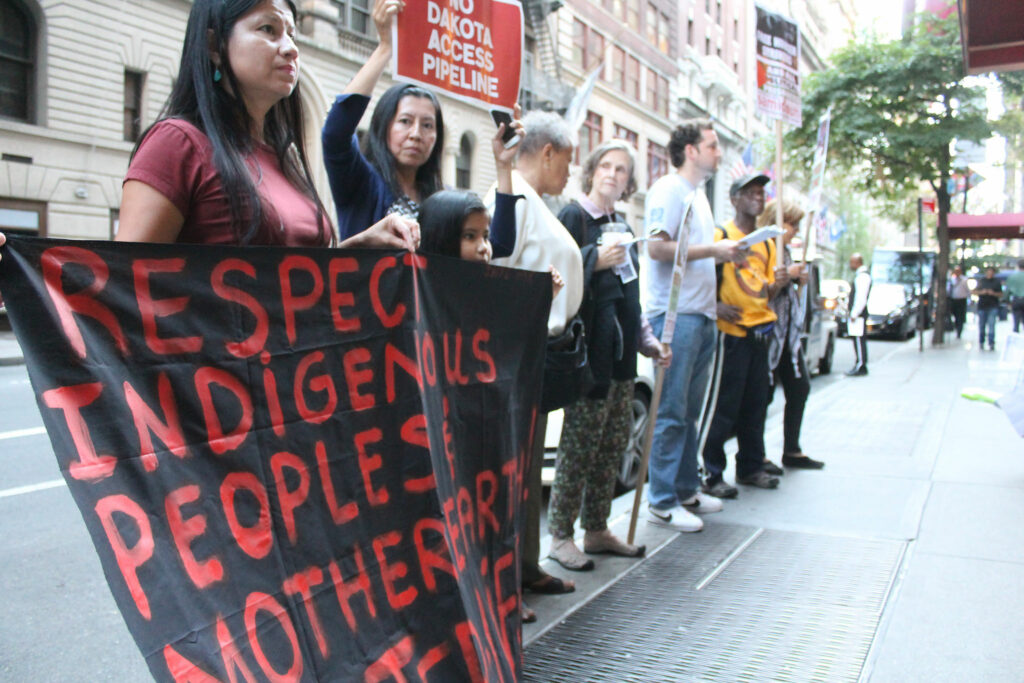 Protesters gathered outside the offices of British-Danish security corporation G4S in New York City on Friday, 16 September to demand it end its involvement in oppression and injustice in Palestine and in Standing Rock, where G4S personnel are serving as “backup security” for the Dakota Access Pipeline and where indigenous people, led by the Standing Rock Sioux, are defending their land and water from the extractive pipeline. 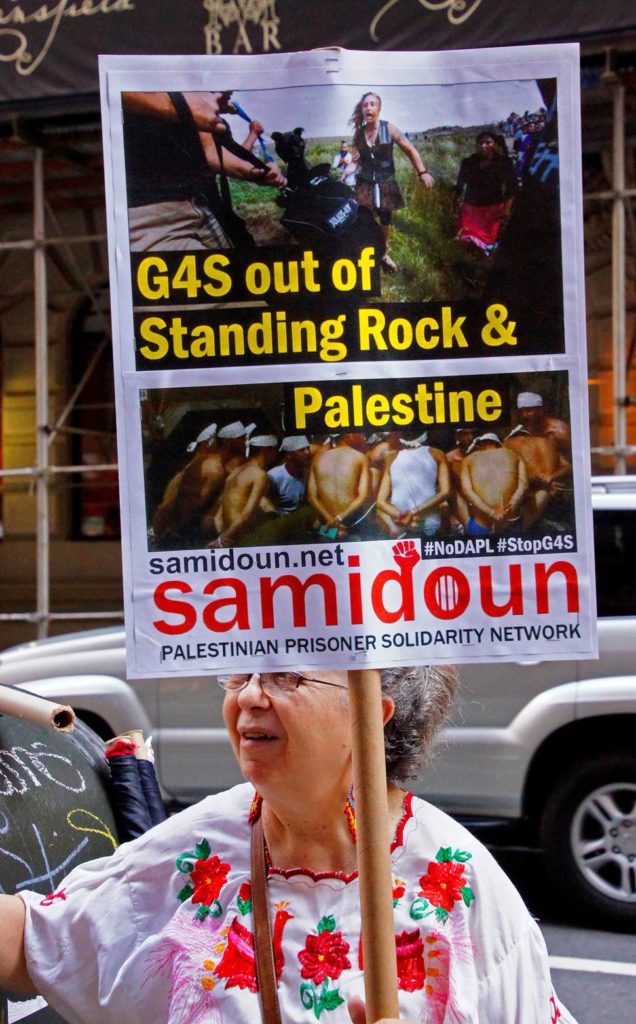 The protest highlighted the role of G4S in contracting with Israel Prison Services to provide security systems, control rooms and equipment to Israeli prisons, checkpoints, and the Erez/Beit Hanoun crossing with Gaza, where the siege on Gaza is enforced. G4S has been brought in against the indigenous blockade of the pipeline, which has intensified a massive movement in support of indigenous land and water defenders and against oil pipelines. 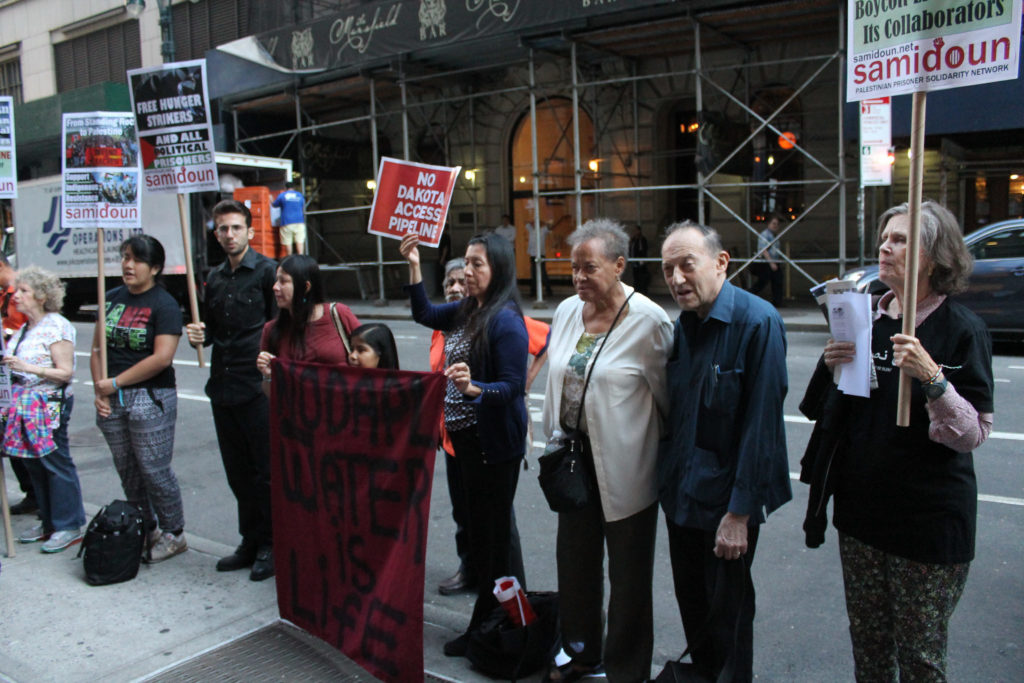 The protest was organized by Samidoun Palestinian Prisoner Solidarity Network as part of its weekly New York City protests against G4S, the subject of an international boycott campaign due to its involvement in the imprisonment of Palestinians, as well as its role in migrant detention and deportation and youth incarceration in the US, UK, Canada, Australia and elsewhere. 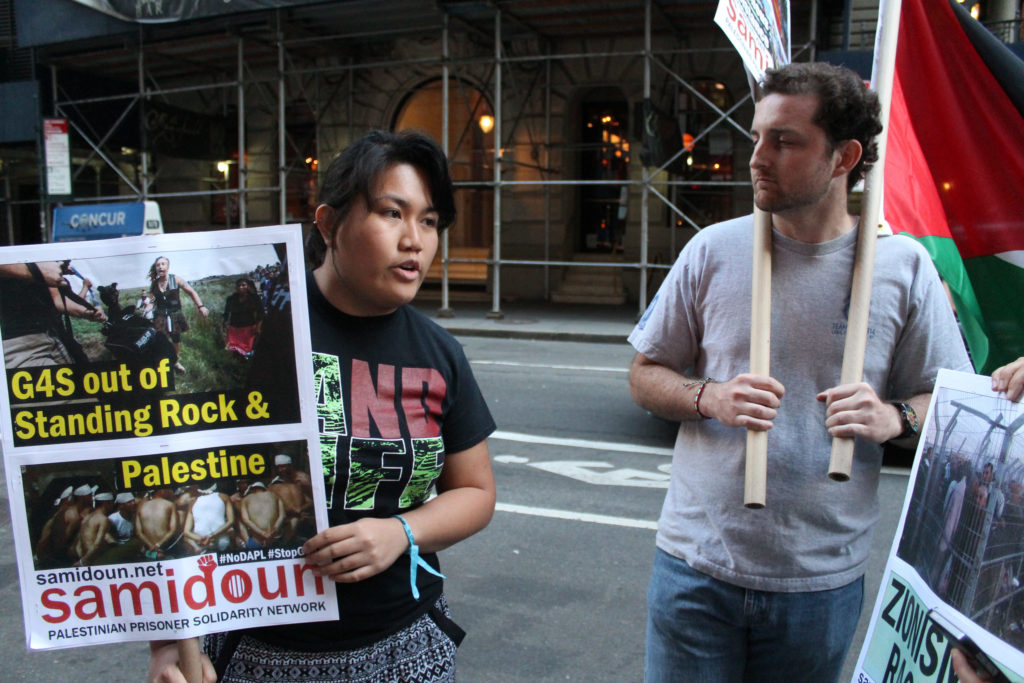 Members of the International Native Tradition Interchange, including CEO Rocio Velandia, participated in the protest; Nina Macapinlac, Northeast Regional Coordinator of BAYAN USA also participated and spoke at the demonstration. She discussed the global dynamics of indigenous struggles over land and resources, particularly the struggle of the Lumad peoples of Mindanao in the Philippines. 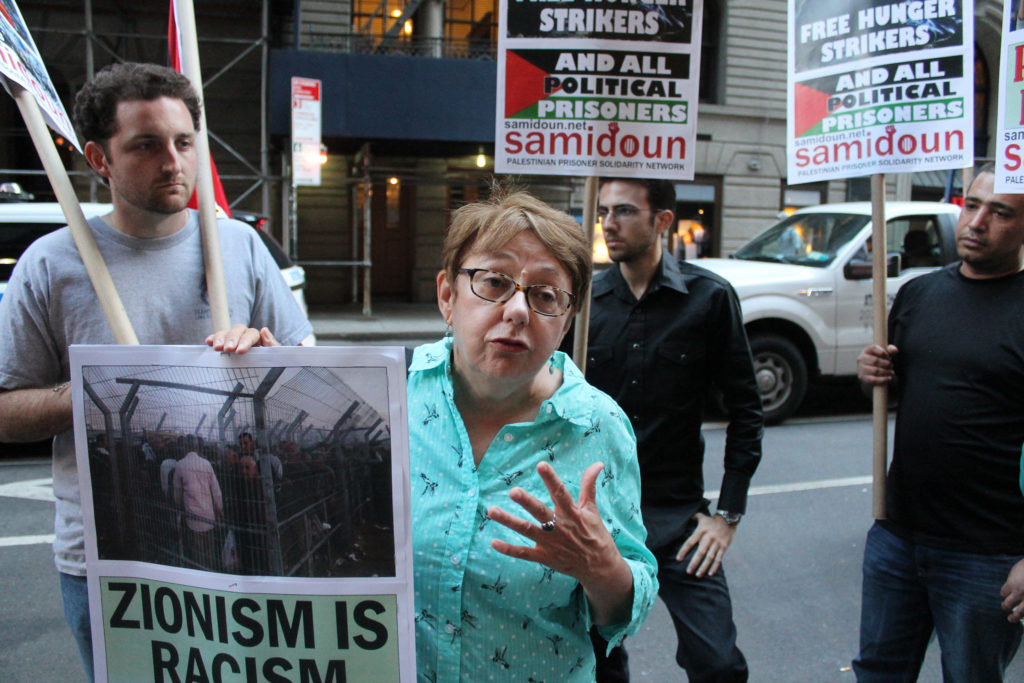 Sara Flounders of the International Action Center, who returned on Tuesday from a solidarity delegation to Standing Rock, spoke about what she saw there and the importance of the issue as a national liberation struggle. 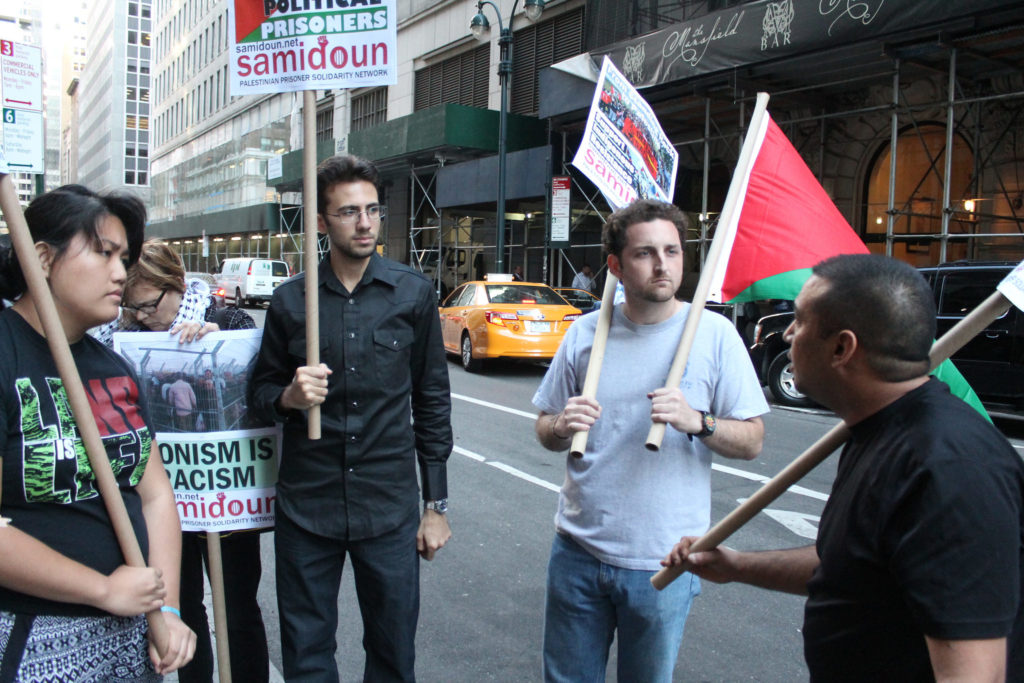 John of Samidoun spoke about Palestinian political prisoners, including the current hunger strikes of Mahmoud al-Balboul, Mohammed al-Balboul and Malik al-Qadi. He also announced the rally taking place on Sunday, 18 September against the Jewish National Fund’s conference in New York City, urging all to participate. 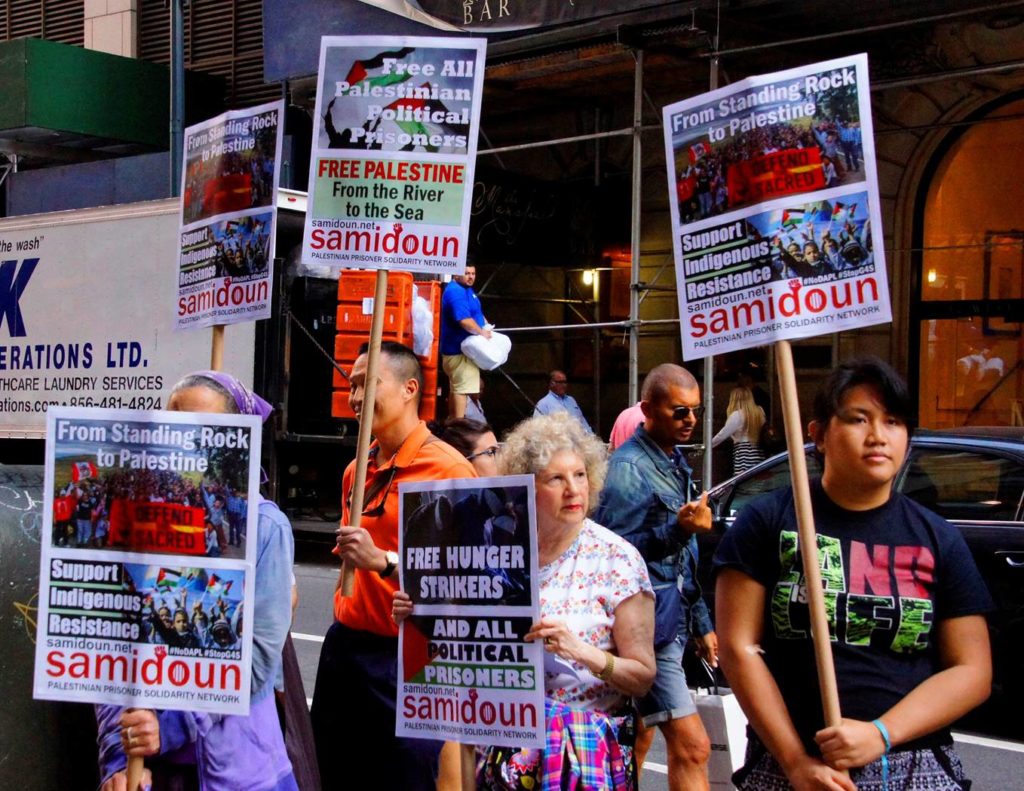 Protesters chanted outside the G4S office, declaring “G4S out of Standing Rock! G4S out of Palestine”, “Occupation is a crime, from Standing Rock to Palestine!” and “When Standing Rock/Palestine is under attack, what do we do? Stand up, fight back!” 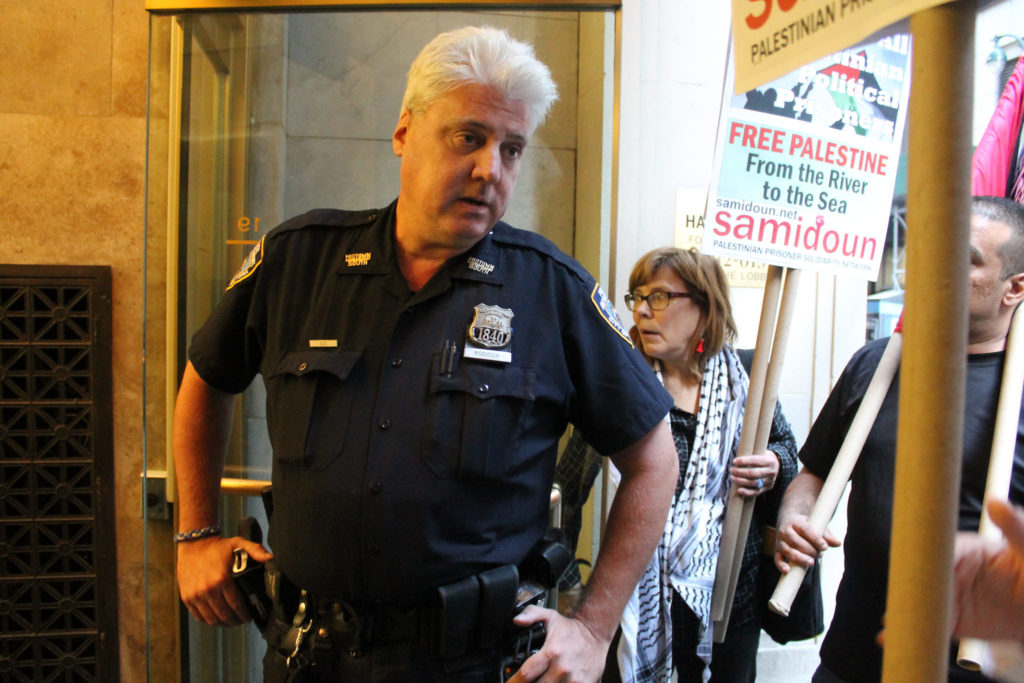 Building management then came down, shouting after the protesters chanting for justice for Standing Rock and Palestine, “Get out of my building!” They locked the doors behind the demonstrators after they exited the building. 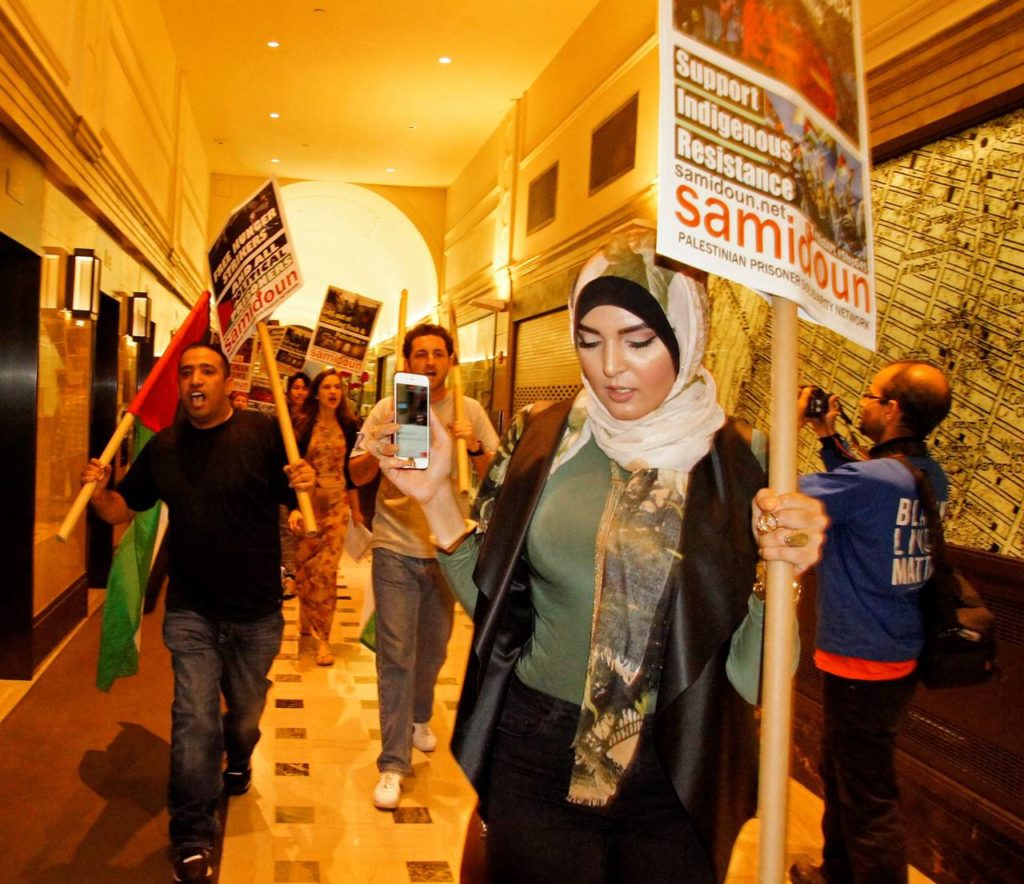 Protesters continued to rally on West 45th Street, on the opposite side of the G4S office building, until the door to the office building was opened by another person; protesters then marched back through the building’s arcade one more time, chanting for justice all the time. 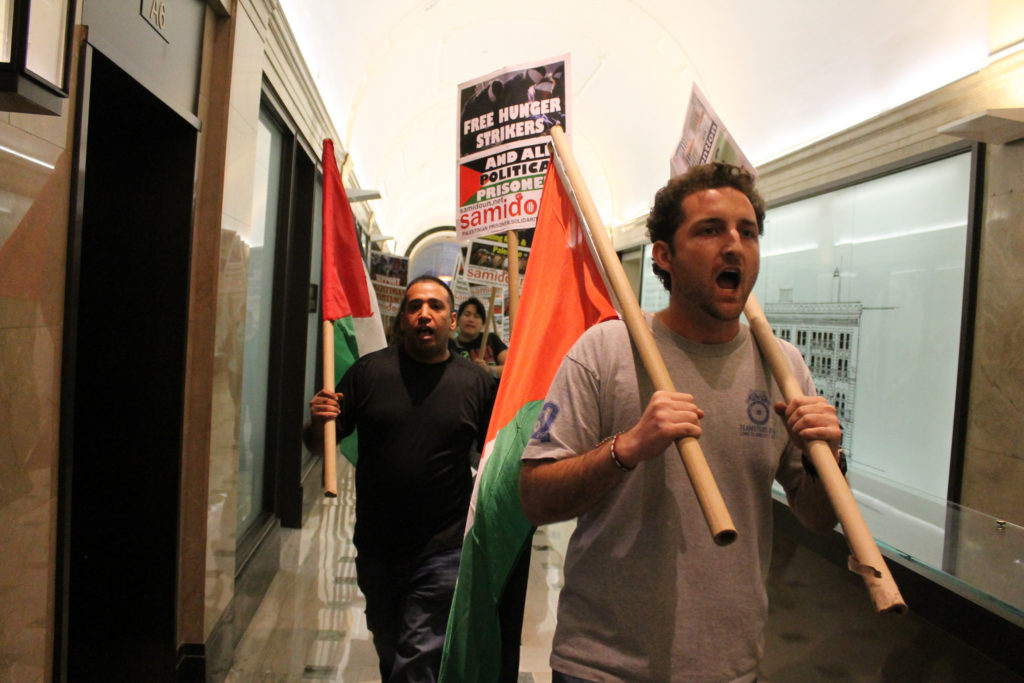 Samidoun will continue its protests against G4S in New York City on a weekly basis, as well as its involvement in supporting the struggle of indigenous people at Standing Rock. 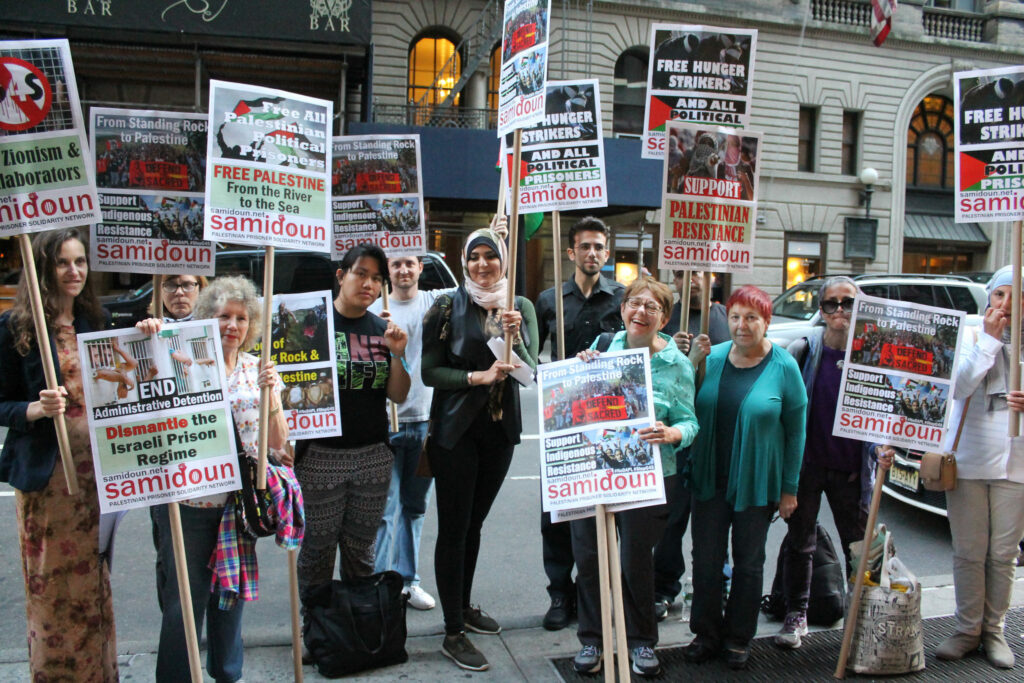