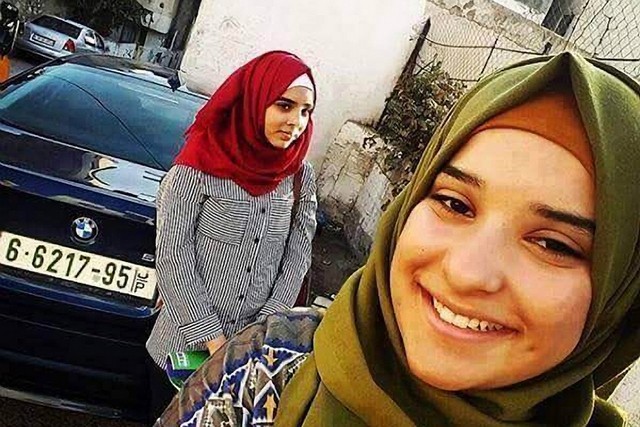 The Israeli occupation prosecutors are seeking a sentence of 15 years of imprisonment against Nurhan Awad, 17, a girl from Qalandiya refugee camp, they announced in a hearing at the Jerusalem District Court on Thursday, 27 October.

The final decision in Nurhan’s case will be issued on 16 November; the Palestinian Prisoners’ Society noted that this is the highest penalty demanded by the prosecution in comparison with other similar cases. Nurhan is one of 12 Palestinian girls imprisoned in Israeli occupation prisons.

Nurhan was arrested on 23 November 2015 by occupation forces; her cousin, Hadeel Awad, 14, was shot dead by Israeli men at the same time.  Al Jazeera has written a longer piece regarding the extrajudicial execution of Hadeel, who was repeatedly shot at close range by an armed Israeli after she lay injured on the ground; she had allegedly attempted to stab a man with scissors. The 70-year-old Palestinian man that was lightly stabbed with scissors was released the same day with minor injuries. Throughout the video of the incident, Nurhan stood in place holding a pair of scissors until one man hit her from behind from a chair and as she lay on the ground, she was shot by another man, several times at close range, including as she lay injured on the ground. Nurhan was severely injured after being shot in the chest twice at close range; Hadeel was killed.

“The cold-blooded murder of mostly children and teens can’t be explained from a security perspective or basic rules of engagement,” said Hussam Zomlot, co-founder of the Palestine Strategy Group, commenting on the extrajudicial execution of Hadeel and the shooting of Nurhan.

Now, Nurhan is being threatened with 15 years imprisonment while her cousin’s life was taken entirely by the same occupation forces who killed Hadeel’s brother, Mahmoud, in 2012, who was shot in the head by occupation forces at a protest.

Nurhan is the latest Palestinian child to be threatened with severe sentences; prosecutors are demanding a 12-year sentence against 14-year-old Ahmad Manasra; Ahmad’s 15-year-old cousin, Hassan, was also shot dead. Hassan’s body was held captive by Israeli occupation forces for seven months before finally being returned to his family.  Child prisoner Muawiya Alqam, 14, was sentenced to 6.5 years in Israeli prisons.

There are over 350 Palestinian children currently held in Israeli prisons. While sentences for children are theoretically limited based on their age, in practice this restriction is meaningless; this restriction does not apply to any offense with a maximum sentence of greater than five years. Allegations like throwing stones or even membership in a prohibited organization routinely can carry maximum sentences above five years, meaning that Palestinian children are sentenced in exactly the same way as adults by Israeli courts.