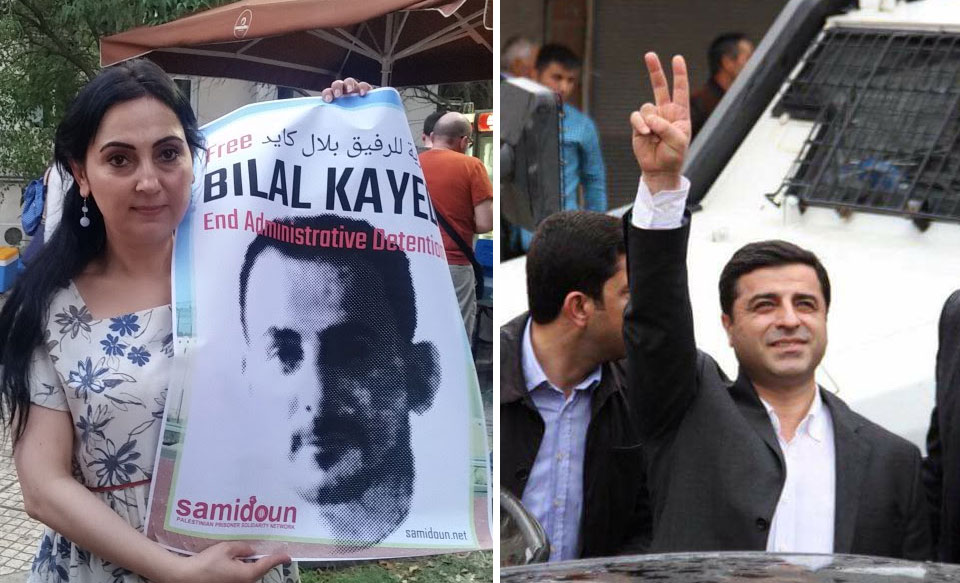 Samidoun Palestinian Prisoner Solidarity Network expresses its solidarity with the People’s Democratic Party (HDP) of Turkey, its elected leadership and members of the Turkish parliament targeted for arrest and persecution. The party’s co-chairs, Selahattin Demirtas and Figen Yuksekdag, have been arrested and jailed alongside seven other members of parliament and amid reports that arrest warrants are outstanding for all of the 59 HDP parliamentarians. We demand their immediate release and the release of all of the Turkish and Kurdish political prisoners in Turkish jails.

A few days ago, the two co-mayors of Diyarbakir, Gulten Kisanak and Firat Anli, and a former member of parliament, Ayla Akat, were also arrested, alongside multiple other political arrests like those of HDP Vice-Chair Alp Altinors. These actions reflect a policy of total repression against the Kurdish movement and the opposition in Turkey, particularly the progressive and left opposition.

In addition, during the last week thousands of academics were fired from their academic positions in Turkish universities and tens of journalists, like the  editor-in-chief and journalists from Cumhuriyet newspaper, were arrested. This follows upon the persecution, arrest and jailing of thousands associated with the HDP and the DBP since July 2015. People taking to the streets in the past day to protest these attacks in cities like Ankara and Istanbul have faced harsh repression, including the use of live bullets to disperse protesters. The elected officials of 28 local councils, most led by the HDP, have been removed under the pretext of a “state of emergency” and replaced by officials supporting Turkish president Recep Tayyip Erdogan’s AK Parti. 30 democatically-elected Kurdish mayors are currently imprisoned.

In addition, several of the leaders and activists currently facing detention and persecution, including Gultan Kisanak, Gulsen Yildirim, Selma Irmak, and other detained leaders are not facing political detention for the first time; Gultan Kisanak in particular was subject to systematic torture in Diyarbakir prison.

The pretext for this attack on the leftist, democratic HDP is the same pretext that we see used internationally to suppress Palestinian and solidarity organizing and national liberation movements broadly – “support for terrorism.” From the United States to France to Turkey, “terror” charges are a means to silence, criminalize and suppress resistance organizing and liberation movements. The specific attack on the HDP leadership and MPs is framed as a “refusal to answer prosecutors’ questions,” or, in other words, a refusal to participate in an unjust process that has its only goal the suppression and criminalization of progressive and popular movements.  “I demand nothing and expect nothing from you. Only the people who elected me can interrogate me about my political activities,” said Yuksekdag. We note the similarity to the use of the grand jury in the United States to criminalize organizing, including solidarity organizing for Palestine, and the important example of the “Midwest 23” in refusing to testify before a grand jury about their political activities.

We also note this escalation in the use of bogus “terror” charges to suppress Kurdish movements and political organizing comes hand in hand with the “normalization” of Turkish-Israeli relations and the escalation of military and intelligence collaboration between the Turkish and Israeli states. Such collaboration can only serve as a mechanism to surveil, repress and attack popular resistance and liberation movements.

We also note the support of the HDP and its leaders, including Figen Yuksekdag, for the Palestinian people’s liberation movement and the struggle of Palestinian prisoners. Turkish and Kurdish political prisoners have long engaged in hunger strikes and suffered torture in prison, an experience of struggle that has only escalated their solidarity with Palestinian prisoners’ demands for freedom and justice.

Following his arrest, Demirtas said, “We want you to know that we will abide by the struggle for democracy, freedom, and peace, waged with devotion by our people….No matter what the circumstances are, we will continue our democratic and political struggle.” We declare our solidarity with the targeted movements in Turkey, including the Kurdish movement and the HDP, and call for the immediate release of all detainees.