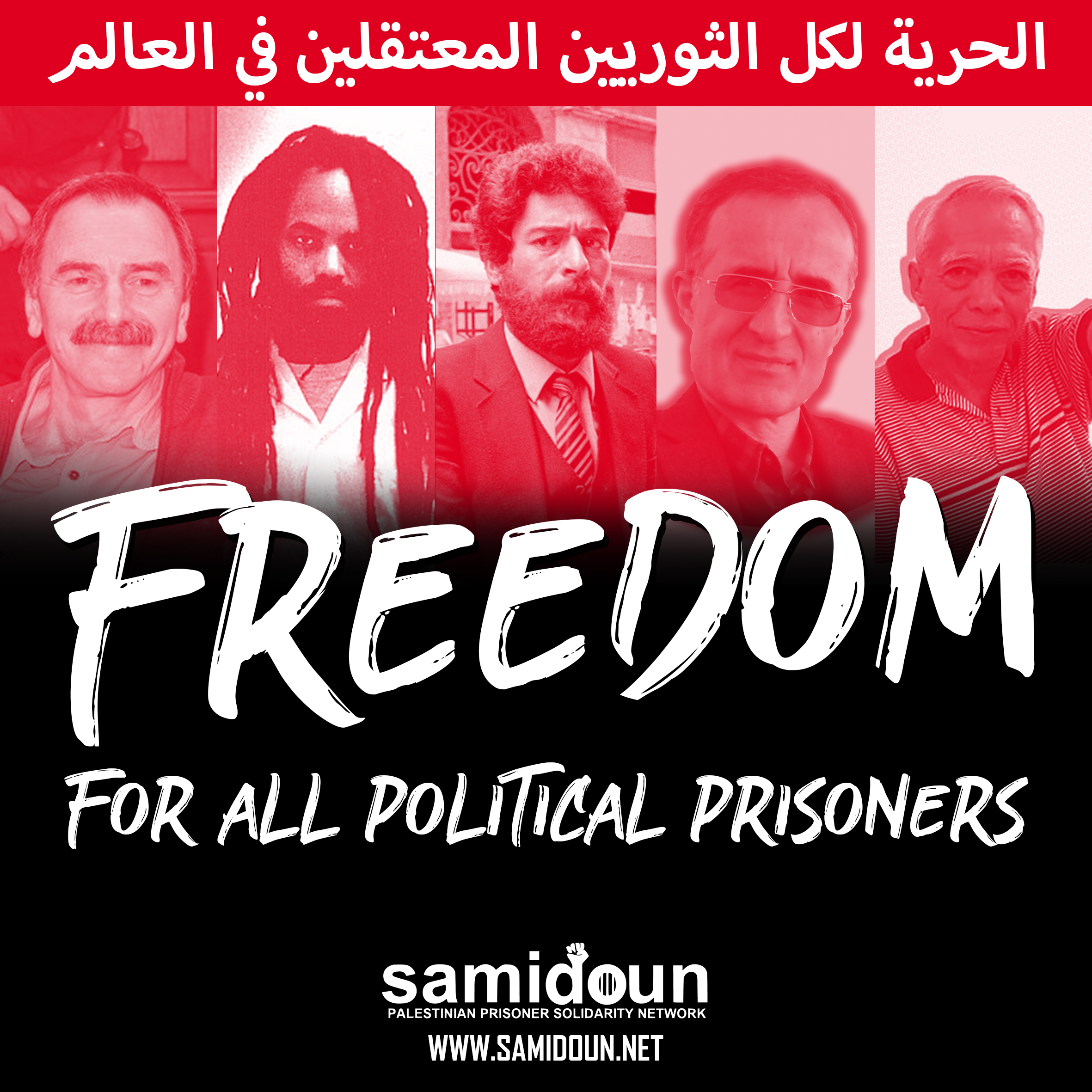 As we struggle for the liberation of Palestinian prisoners from Israeli and international jails, Samidoun Palestinian Prisoner Solidarity Network also expresses our strongest solidarity with the revolutionary prisoners around the world in imperialist and reactionary regimes’ jails.
We call for the freedom of thousands of political prisoners in Egypt, Palestinians imprisoned in Saudi Arabia and Sahrawi and Moroccan strugglers for justice jailed in the prisons of Morocco, and many more political prisoners in the Arab world held behind bars for seeking progressive and revolutionary change or for resisting Zionism and imperialism.
We also express our strongest solidarity to all of the political prisoners in Turkey, the Philippines, Colombia, India, the United States and Europe. The prisoners of the Black Liberation Movement continue to struggle for freedom, some with decades of lengthy imprisonment. We call for the immediate release of the members of Grup Yorum, the imprisoned Turkish lawyers and all of the Turkish and Kurdish prisoners jailed in Turkey. We also stand in solidarity with the Turkish and Kurdish organizers in Europe who are also facing political imprisonment and repression because they continue to struggle for their people and their rights.
The Duterte regime in the Philippines is intensifying its repression and political attacks rather than protecting the health of the people. In Colombia, there are 380 political prisoners and dozens of social activists have been killed in recent months. India is severely repressing and imprisoning Kashmiris alongside numerous intellectuals and activists jailed under the “sedition law.”
Of course, we also stand in full solidarity with the prisoners of Palestine around the world, including Georges Ibrahim Abdallah in French prisons and the Holy Land Five in the United States.
This graphic highlights just five of these thousands of strugglers worldwide. The struggle for the liberation of Palestine is a Palestinian, Arab and international struggle that involves the confrontation of not only the Israeli state but also the reactionary regimes and imperialist powers that keep these fighters for justice behind bars. Freedom for all political prisoners!
On this image:
Musa Asoglu, a Turkish revolutionary detained in Germany since 2 December 2016. Accused to be a leader of the DHKP-C (Revolutionary People’s Liberation Party/Front), his indictment is essentially based on his political activities. These include organizing a symposium against isolation in several European countries, as well as various political investments in democratic spheres. For more information: https://www.musaasoglu.org/
Mumia Abu-Jamal, journalist and political activist, former member of the Black Panther Party, has spent the last 30 years of his life in prison, most of it in solitary confinement on Death Row in Pennsylvania. Organizations around the world have urged his immediate release as he continues to write and speak from behin bars. For more information: https://www.freemumia.com/
Georges Ibrahim Abdallah, Lebanese Arab Communist fighter for Palestine, has been jailed in France since 1984, despie being eligible for release since 1999. The United States and Israel have repeatedly intervened to prevent his release. For more information, please see: https://liberonsgeorges.samizdat.net/
Muslum Elma, born in Dersim, Turkey, in 1960 to a Kurdish and Alevi family, has been imprisoned since 2015 in Germany, accused of involvement in the Communist Party of Turkey Marxist / Leninist. As a revolutionary, he was jailed in Turkey for many years, subjected to extreme torture and participated in several long-term hunger strikes. Despite bing granted asylum in Germany due to repression in Turkey, today he is jailed due to Turkish security allegations. For more information: https://www.facebook.com/FreeMuslumElma/
Rey Casambre is a consultant of the National Democratic Front of the Philippines (NDFP) and the Executive Director of the Philippine Peace Center. He has been jailed since 2018 by the Duterte regime along with many other social leaders, trade unionists, indigenous organizers and others targeted for repression. Amid the COVID-19 crisis, his life is particularly at risk due to his advanced age and health conditions. For more information: https://www.facebook.com/FreeReyCasambre/
Join the @samidounnetwork channel on Telegram