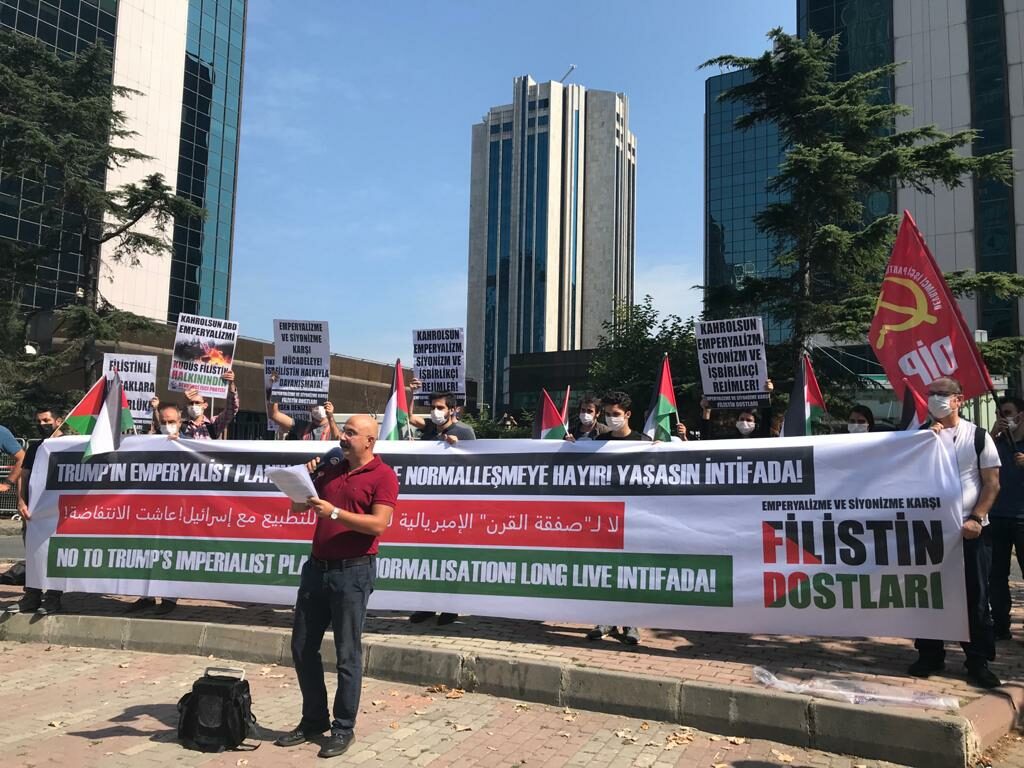 On Friday, 25 September, the Friends of Palestine Against Imperialism and Zionism (Emperyalizme ve Siyonizme Karşı Filistin Dostları) organized a demonstration outside the Israeli consulate to denounce the U.S.-backed UAE/Bahraini normalization with the Israeli state, mark the anniversary of the second Intifada and remember the Sabra and Shatila massacres. The event also came as part of #Action4Return, the week of action to defend the Palestinian right to return and confront normalization called for by Samidoun with many other organizations around the world.

We republish below the following article by the comrades at Friends of Palestine reporting on the demonstration: 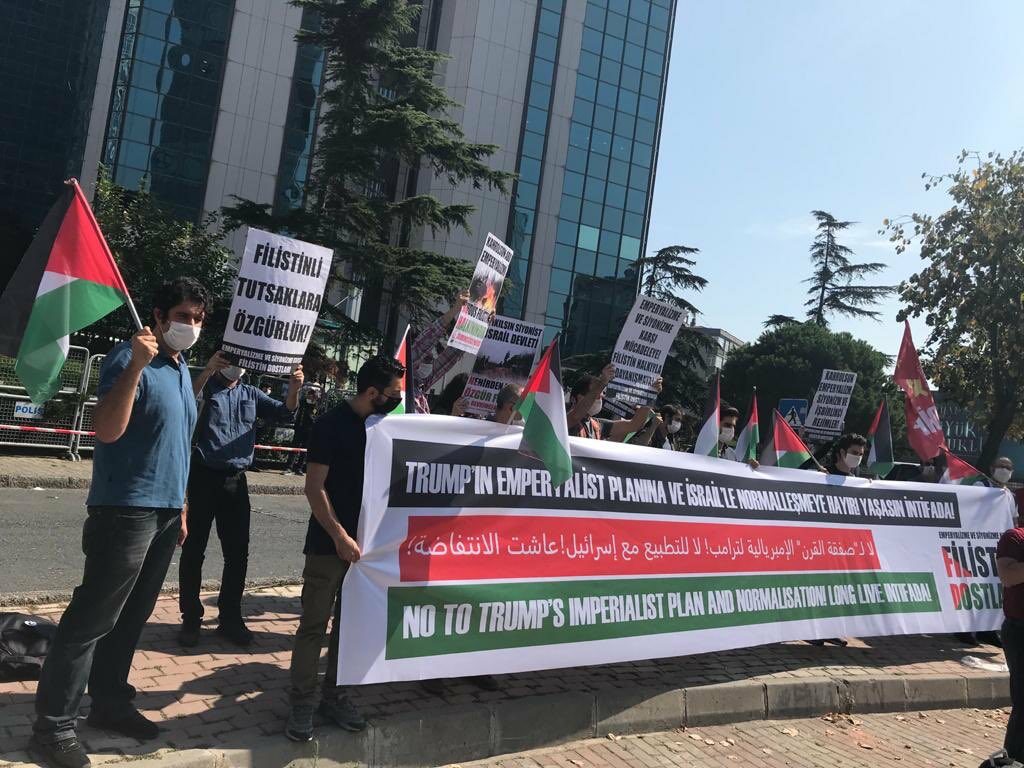 We held a demonstration in the front of the Israeli Consulate in Istanbul / Turkey to commemorate the 20th anniversary of the Second Intifada and the 38th anniversary of Sabra and Shatila massacres and to protest the attempts for the so-called “normalization” process initiated first by Trump’s “Deal of the Century” and then promoted by the treaties signed between Israel and some Arab states.

Our banner read “No to Trump’s imperialist plan and normalization with Israel! Long live Intifada!” in Turkish, Arabic and English. Some of our slogans were: “Free Palestine from the sea to the river!”, “Expel the Israeli ambassador!”, “Sever all relationships with Israel!”, “Israel will be defeated! Palestine will win!”

Below you’ll find a translation of the statement read there by Kutlu Dane, one of our spokespersons: 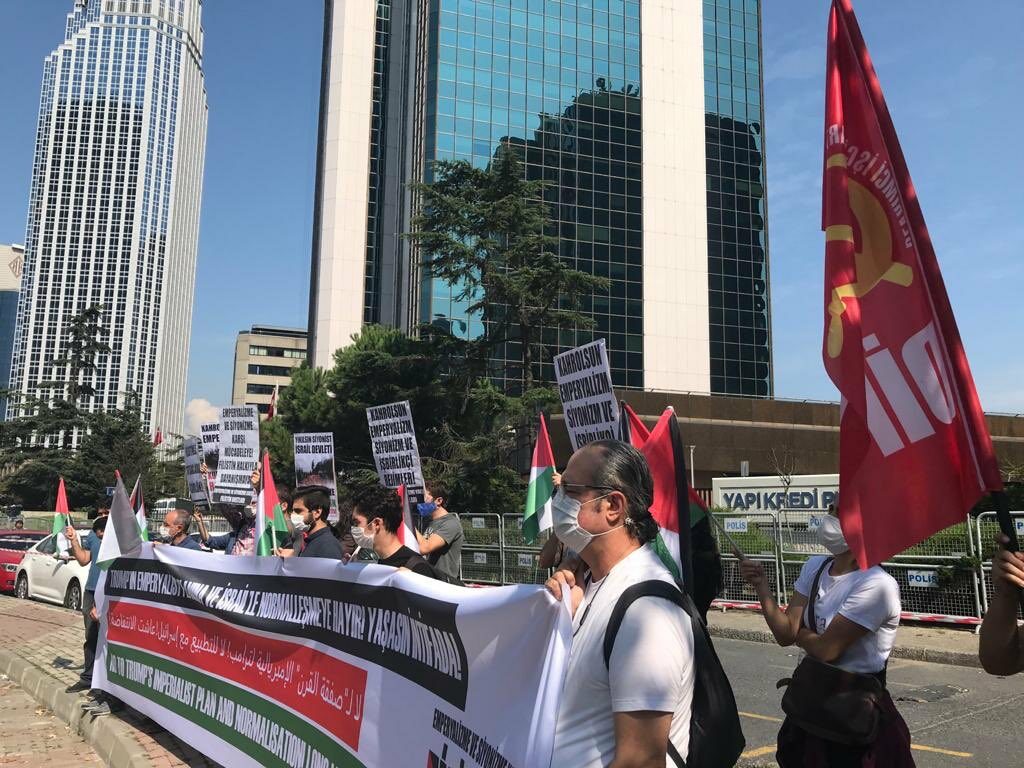 Today we are here, in front of the Israel’s so-called consulate, once again to release a press statement about two Palestinian-question-related anniversaries alongside a string of recent political developments. The statement is intended both to reiterate our support to the right to return and to condemn the Zionist Israel and its imperialist collaborators.

The Zionist entity founded at the expense of expelling hundreds of thousands of Palestinians from their lands in 1948 has been touted, unfortunately successfully, by Zionists as a civilized and modern state. The Consulate building behind us is one of the places where that propaganda aimed at whitewashing Israel’s crimes is manufactured and disseminated.

38 years ago, Phalangists under Zionist auspices committed a massacre in the Sabra and Shatila Palestinian refugee camps in Israeli-besieged Beirut, with a death toll of 3.000. Israeli occupying forces helped their phalangist allies by launching flares to illuminate the camp area and blocking the gates to prevent refugees from surviving the attack.

Israel and its cohorts perpetrated that crime within a couple of days, before the international force deployed to protect the camps arrived and after the Palestinian resistance organizations had left Lebanon as stipulated in the international treaty. Hence that was a premeditated ignominious mass murder and an ethnic cleansing inspired undoubtedly by the methods of Nazis. If Anne Frank had been still alive, we are sure that she would have spitted on the faces of those barbarians and that she would have mourned for her Palestinian sisters and brothers killed in those camps.

Sabra and Shatila massacres were also assaults against the right to return.

But the Palestinian people have never kneeled down! Having experienced many massacres inflicted by Zionism almost since 1930s, the Palestinian people have embarked on a world-renowned and inspiring struggle, which reached its climax in the intifadas of 1987 and 2000. This week is the anniversary of the latter, which had begun on September 28th 2000. That great uprising during which 4.000 Palestinians, including 11 year old Muhammed Al-Durra who was shot dead hiding behind his father, have been martyred had shown the whole world how barbaric Zionism was.

Second Intifada was an upheaval for the Palestinian people to claim their right to return.

As thousands of Palestinians have been martyred for the cause, a section of the Palestinian leadership had already begun to act in cahoots with the illegitimate Israeli state. The cause was betrayed first by Anwar Sadat, and then by Arafat in 80s. The negotiations called Oslo Process have resulted eventually in the Palestinian Authority, which does dirty jobs in the West Bank for Israel! That imperialism and Zionism collude, overtly or covertly, with the reactionary Arab regimes unfortunately diminishes the hopes to return of the Palestinian people. Recognizing the Zionist entity, Arab countries which have turned into lackeys of the US imperialism pave the ways for more brutality against the Palestinian people. The so-called “normalization” process initiated by Trump’s “deal of the century”, which demands total surrender of the Palestinian people in return for a small land and a share from oil revenues, is now enhanced by the treaties signed between Israel and the United Arab Emirates and Bahrain. Oman and Saudi Arabia wait for their turn.

That so-called normalization is nothing but an attack on the right to return.

But we would like to make sure that Zionists’ flagrant moves will never make us fear. Neither the Palestinian people nor we give up fighting. Just look at the anti-Zionist protestors flocking to the streets of Manama, Cairo, Latin America, Europe and USA or at the unbreakable resistance of the gallant Palestinian prisoners in Israeli prisons.

Palestinian people’s fight for the right to return will last till Israel is destroyed!

On the other hand, Turkish governments’ criticism towards the United Arab Emirates and Bahrain is clear example of hypocrisy. Turkey has “normalized” its relationship with Israel long before those countries did! We forget neither the strong economic, intelligence and military collaborations between Turkey and Israel nor how you withdrew the Mavi Marmara case. Stop using Palestine as a bargaining chip for natural gas found in the Eastern Mediterranean! Expel the Israeli ambassador! Sever all relationships with Israel!

We would like to emphasize that we hold that demonstration on the call of Samidoun (Palestinian Prisoner Solidarity Network) and pro-Palestinian organizations. We will keep fighting against Zionism and acting in solidarity with the Palestinian people till the day Israel is destroyed!

We will do so till the last intifada, which will be the last nail in the coffin of Israel, and lead to a free, secular, democratic and socialist Palestine from the sea to the river! 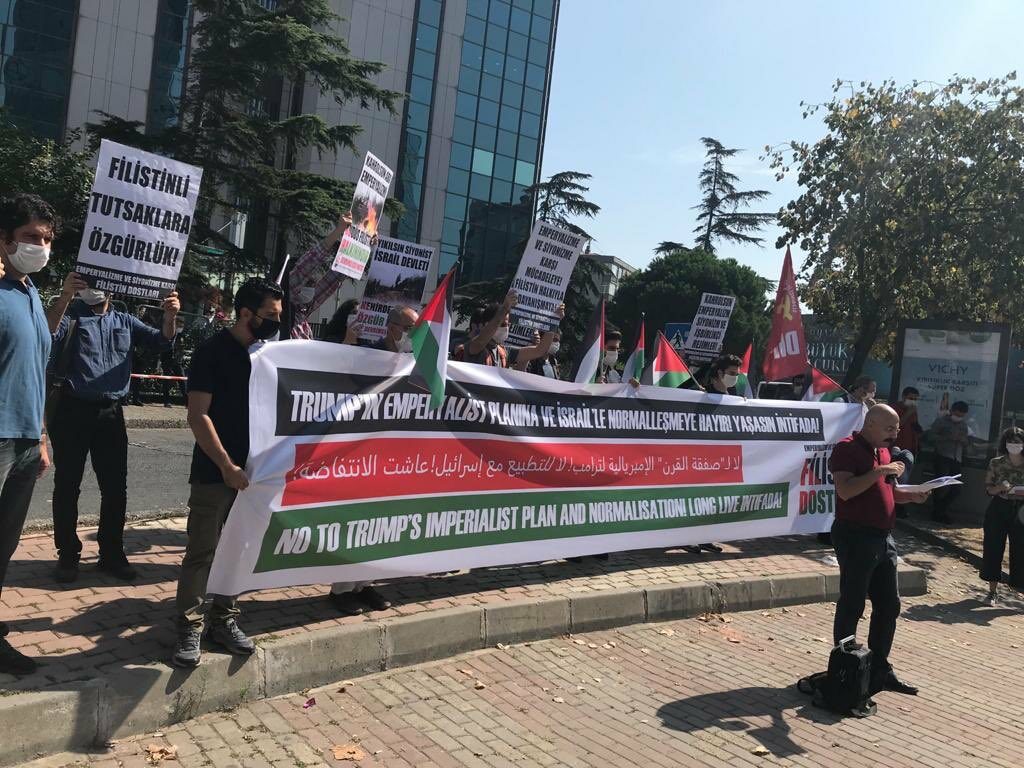 Friends of Palestine Against Imperialism and Zionism