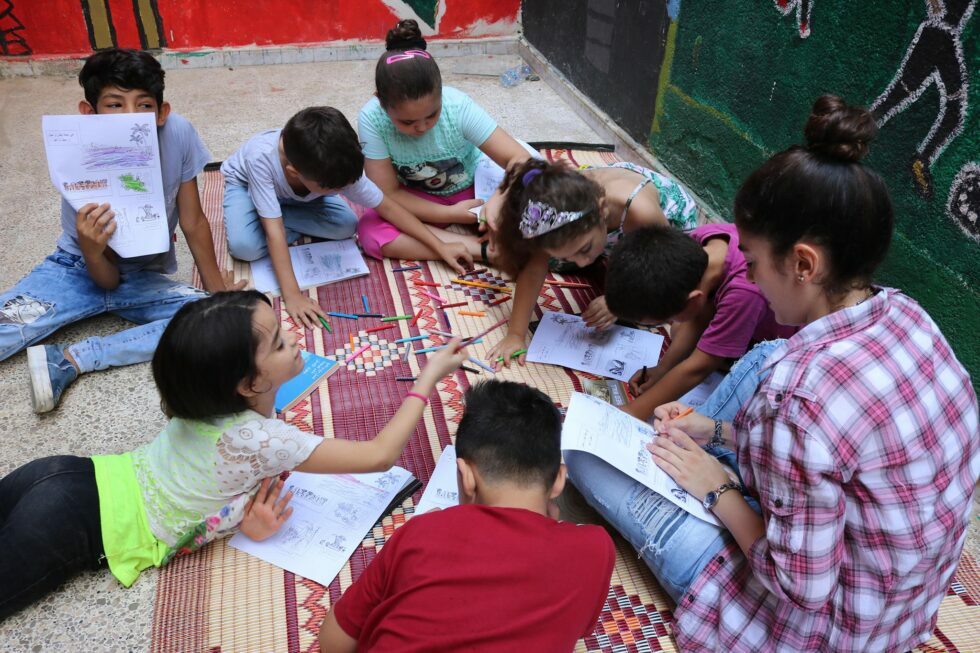 Republished from the original French at Collectif Palestine Vaincra: https://palestinevaincra.com/2020/09/solidarite-avec-le-centre-al-naqab-du-camp-de-refugies-palestiniens-de-burj-al-barajneh-de-beyrouth/

Following the explosion at the port of Beirut, Lebanon, the Collectif Palestine Vaincra, a member organization of the Samidoun Network in Toulouse, France, organized a solidarity fundraiser to support the Al Naqab Center, a cultural center for youth in the Palestinian refugee camp of Bourj al-Barajneh in the south of Beirut. In a few days, the collective raised € 500 to support their work, which is more necessary than ever. We publish below the message they sent highlighting that solidarity is, first and foremost, mutual aid in common struggle. You can donate online to support Al Naqab Center here: https://www.givingloop.org/alnaqabcenterforyouthactivities

The Al Naqab Center’s letter is below:

To our comrades in Toulouse, we send you our heartfelt greetings from Bourj Al Barajneh Camp in Lebanon. We send you this letter as Macron was only recently parading through the streets of Beirut and being received as a saviour by some, others protested his presence, shouting “Free George Abdallah” at him. Like them, we are not fooled by Macron’s antics. For we know all too well France’s role as an oppressor—from the colonization of Algeria, the Levant, West Africa, and Southeast Asia, to the neocolonial policies of “Françafrique”, which continue to exploit the people of Mali, Cote d’Ivoire, Burkina Faso, and beyond. We have also seen how French cops act like an occupying force in the banlieue—beating, killing, and imprisoning our Black and Arab brothers and sisters. We also know of the vicious neoliberal policies the Macron government and its predecessors have enacted, and we have witnessed his cops beating striking workers and students who have stood up to resist them.

In Lebanon, our people continue to face the injustice of forced exile from our homeland. As refugees for the past 72 years, we have been deprived of our basic human rights throughout the world, but in Lebanon the discrimination and racism we face is as stark as it is blatant. As Palestinians, we are barred from many jobs, owning property, and access to social security. Our people are forced to live in overcrowded refugee camps, which lack basic infrastructure and are besieged by physical barriers and military checkpoints. The ongoing financial and economic collapse in Lebanon has continued to decimate our people, whose financial and economic position was precarious to begin with. The situation has only worsened due to the COVID-19 pandemic and the recent Beirut port explosion.

At Al-Naqab center, we continue to struggle for the survival of our people. Our main activity is in education. To counter the disparity in educational opportunities and quality of schools available to our people, we offer school support and tutoring to Palestinian students in Bourj al Barajneh free of charge. We also teach the history and geography of Palestine and our struggle. In addition to this we have a youth football team because we believe sports can be an educational tool that builds leadership, self-esteem, self-confidence, and cooperation. We also organize campaigns and events in support of the Palestinian struggle. Most recently, and due to the economic situation Al-Naqab has joined forces with other groups and individuals in the camp to organize food distributions.

In all our work we have relied on an independent funding model by only accepting unconditional donations and membership dues. This is part of our aim of building an organisation using an alternative model to the depoliticised NGO model that has come to dominate and police our camps and spaces. With continued principled support from our community and supporters throughout the world, we can demonstrate that another way is possible. Despite the state of utter collapse and freefall into the abyss, we refuse to surrender to the hopeless reality and we live by comrade George’s words “No remorse, no compromise, I will forever resist!”