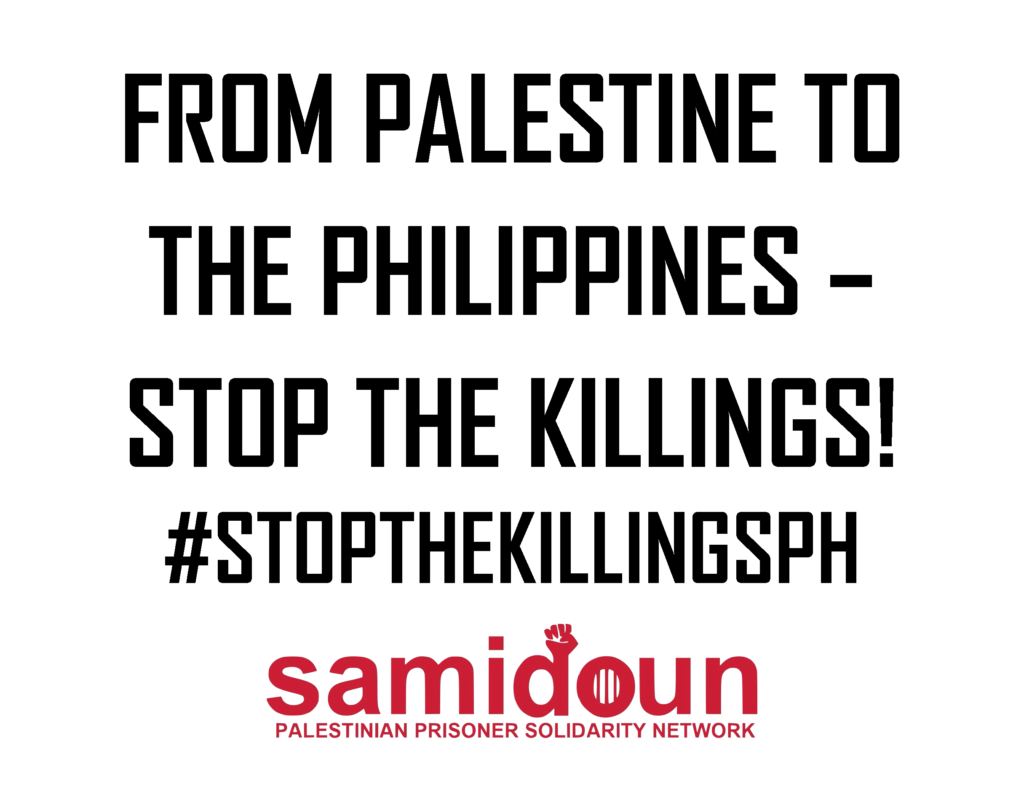 Samidoun Palestinian Prisoner Solidarity Network joins in the global day of action on 14 September to stop the killings in the Philippines and build the international struggle for justice. Organized by Karapatan, the National Union of Peoples’ Lawyers, Kalikasan People’s Network for the Environment, 350.org Pilipinas, the Ecumenical Voice for Human Rights and Peace in the Philippines, Civicus, ESCR-Net, AWID, IADL, APWLD, the Asia Pacific Network of Environment Defenders, the International Coalition for Human Rights in the Philippines, PCFS, and OMCT, the day of action marked the opening of the 45th session of the UN Human Rights Council.

The global day of action, which included in-person, online and Twitter calls to action, focused on extrajudicial killings targeting activists and human rights defenders, which have multiplied alongside the imprisonment of political prisoners in the Philippines. Karapatan reported, “In Quezon City, human rights activists unfurled a big “Stop the Killings” banner in Liwasang Diokno at the Commission on Human Rights compound. The hashtags #StopTheKillingsPH #HRC45 were used by individual advocates on Facebook and Twitter. Prior to September 14, human rights lawyers in Turkey conducted protest actions in several cities in their country to support the call, while rights advocates in Switzerland held a protest action in Bern.”

A statement signed by over 700 global organizations and advocates, including Samidoun, was submitted to the UNHRC, “citing the signing and enactment of the Anti-Terrorism Act which is “seen as a measure that will aggravate the attacks and vilification of human rights defenders and civil society” as well as the killings of peasant leader Randall Echanis and health activist Zara Alvarez in August, following the killings of relief worker Jory Porquia, peasant leader Nora Apique and urban poor leader Carlito Badion amid the imposition of lockdowns to combat the COVID-19 pandemic and continuing killings linked to the government’s bloody campaign against illegal drugs.”

As noted previously, “While the so-called “Anti-Terror Law” in the Philippines imposes yet another threat upon people’s rights defenders and activists struggling to defend the land, workers and people from imperialism and exploitation, these same human rights defenders are subjected to a vicious campaign of state terror. Duterte has aligned himself with all of the most extreme right, fascist forces in the world, from the military might of U.S. imperialism to the Israeli occupation regime.

Indeed, Duterte carried out the first visit of a president of the Philippines to Israel, deepening the economic, agricultural and scientific relationship between the Israeli occupation regime and the Philippines, and thanking Israel for its ‘critical assistance’ in the so-called ‘war on terror.’ In reality, the “war on terror” in the Philippines consists of violent repression of workers, peasants and human rights defenders. There have been thousands of extrajudicial killings in just the past three years, including over 50 lawyers gunned down, with no justice or accountability.

We stand with the people’s movement in the Philippines and around the world in calling for justice, accountability and an end to the targeting of activists and human rights defenders for political imprisonment and extrajudicial killings, and add our voice to thousands of others raised on this day.

Republished below is the international statement from Karapatan: https://www.karapatan.org/stop+the+killings+un+human+rights+council+investigate+the+human+rights+situation+in+the+philippines

During the 44th session of the United Nations Human Rights Council (UN HRC) in June 2020, UN High Commissioner for Human Rights Michelle Bachelet reported the widespread and systematic human rights violations in the Philippines. The High Commissioner found that domestic mechanisms have failed to ensure accountability, and that there is persistent impunity for human rights violations. She also cited that authorities’ harmful rhetoric inciting hatred and violence against women, human rights defenders, political opposition, civil society, indigenous peoples, drug users and peddlers, and relief workers, which continued during the COVID-19 period, could amount to a violation of the International Covenant on Civil and Political Rights.

Weeks after the release of Bachelet’s comprehensive report, the human rights situation in the Philippines took a turn for the worse. In the first week of July, the President signed the Anti-Terror Act that is seen as a measure that will aggravate the attacks and vilification of human rights defenders and civil society. The exercise of fundamental freedoms and rights has been compromised, with numerous challenges to press freedom and activists and protesters arrested and detained on flimsy charges. In August, only days apart, peasant leader Randall Echanis and health activist Zara Alvarez were summarily executed in separate incidents, following the killings of relief worker Jory Porquia, peasant leader Nora Apique and urban poor leader Carlito Badion during the COVID-19 lockdown. The lawyer and paralegal volunteer assisting the family of Echanis are now facing police complaints for allegedly obstructing its investigation. Threats of violence, including death threats, against activists and human rights defenders have continued unabated.

We must put a stop to these unrelenting attacks now. And this worsening situation would not end as long as those who perpetrate them run free and unscathed. These perpetrators must be brought to justice before any court, tribunal or body that will act independently, with impartiality, and effectively, having allegiance to human rights and justice instead of powers that be. We need true accountability and genuine transparency in the inquiry into these human rights violations, removing the possibility that investigations would only shield and even absolve the persons liable for the crimes.

We cannot rely on the promise of a government that has shown great disdain and disrespect of human rights to exact accountability and operate with transparency. This government has shown nothing but contempt for individuals and experts, including those in the UN and the International Criminal Court, who independently and impartially seek investigation into the relentless human rights violations in the Philippines.

The Philippine Justice Secretary, during the 44th UNHRC Session, denied the existence of impunity in the Philippines, promising the creation of an inter-agency panel to review the 5,655 killings during the police’s anti-illegal drug operations. He denied allegations of widespread and systematic killings as well as other human rights violations. He stressed that the Government has respected human rights and other fundamental freedoms, reiterating the existence of accountability measures, such as an inter-agency committee on extralegal killings, enforced disappearances, torture, and other grave violations of the right to life, liberty and security of persons.

We have witnessed a long history of domestic inter-agency task forces and fact-finding commissions promising to act without fear or favor. But we repeatedly have been frustrated and even enraged by the fruitlessness and ineffectiveness of these so-called domestic accountability measures. Rather than help, these government bodies have even contributed to the infrastructure of impunity and miscarriage of justice against the victims of human rights violations.

This must happen now before we lose another Zara Alvarez, another Randall Echanis, another Jory Porquia, another Kian delos Santos, and another Filipino to these cruel, widespread and systematic violations. ###

SIGNED BY THE FOLLOWING ORGANIZATIONS:

SIGNED BY THE FOLLOWING INDIVIDUALS: