Samidoun Palestinian Prisoner Solidarity Network joins the people’s movement of the Philippines and international voices of solidarity in demanding justice for the murder of Zara Alvarez, a human rights activist, paralegal and a member of the Negros Integrated Health Program. She was shot down in the street in Bacolod City tonight, 17 August, by “unidentified perpetrators,” the latest victim of the extrajudicial killings of the fascist regime of President Rodrigo Duterte in the Philippines.

Zara Alvarez is a former political prisoner – while imprisoned, she wrote a public letter to her family, concluding with the following words: “Still, one voice is a noise, but more voices is a voice of freedom, soon we realize, everybody are singing the song of the people, taking a stand to end political persecution and demanding justice to all victims of human rights violations. Time will come that no amount of fear can stop us in cultivating everybody’s freedom.”

Zara Alvarez was beloved by her family, friends and comrades in the Philippines around the world who cherished her warmth, dedication, commitment and love for the people. A longtime activisit, she was the chair of Anakbayan-Negros, the progressive youth organization, and previously served as deputy general secretary of BAYAN-Negros as well as campaign and education director of KARAPATAN Negros. Imprisoning her on trumped-up charges did nothing to lessen her resolve and her commitment to the people.

The extrajudicial killing of Zara Alvarez comes just one week after the torture slaying of land defender and peasant leader Ka Randy Echanis, chair of the Anakpawis Partylist and a former political prisoner three times over. As noted by the International League of Peoples’ Struggle (of which Samidoun is a member), “Ka Randy was also a great internationalist and anti-imperialist. His more than five decades of dedication in fighting for land reform in the Philippines include his active involvement in the peasant movement in Asia. He was active in international work with the Asian Peasant Coalition, an Asia-wide peasant coalition of farmers, agricultural workers, Indigenous Peoples with more than 15 Million members representing 21 organizations.”

Ka Randy Echanis was also the deputy general secretary of the Kilusang Magbubukid ng Pilipinas (Peasant Movement of the Philippines) and a consultant to the National Democratic Forces of the Philippines (NDFP) on land and agrarian reform. He was found brutally murdered in his home on 10 August, his body covered in stab marks and shot twice in the head in his home in Quezon City, extrajudicially executed for defending the land and rights of the peasants of the Philippines from huge multinationals and feudalist landlords.

We join with the people’s movement of the Philippines in demanding freedom for all political prisoners and justice for Zara Alvarez, Ka Randy Echanis and their fellow victims of extrajudicial killing and assassination at the hands of the US-backed Duterte regime, in league with imperialism and multinational corporations in the exploitation of the land and people of the Philippines.

While the so-called “Anti-Terror Law” in the Philippines imposes yet another threat upon people’s rights defenders and activists struggling to defend the land, workers and people from imperialism and exploitation, these same human rights defenders are subjected to a vicious campaign of state terror. Duterte has aligned himself with all of the most extreme right, fascist forces in the world, from the military might of U.S. imperialism to the Israeli occupation regime.

Indeed, Duterte carried out the first visit of a president of the Philippines to Israel, deepening the economic, agricultural and scientific relationship between the Israeli occupation regime and the Philippines, and thanking Israel for its “critical assistance” in the so-called “war on terror.” In reality, the “war on terror” in the Philippines consists of violent repression of workers, peasants and human rights defenders. There have been thousands of extrajudicial killings in just the past three years, including over 50 lawyers gunned down, with no justice or accountability.

We pledge to continue to honor the profound memory and powerful legacy of Zara Alvarez and Ka Randy Echanis by continuing to stand together, from Palestine to the Philippines, in a common struggle against imperialism, oppression, exploitation and injustice, marching together towards liberation.

Junk the terror law! Stop the killings! Stop the U.S.-Duterte war machine, from Palestine to the Philippines! 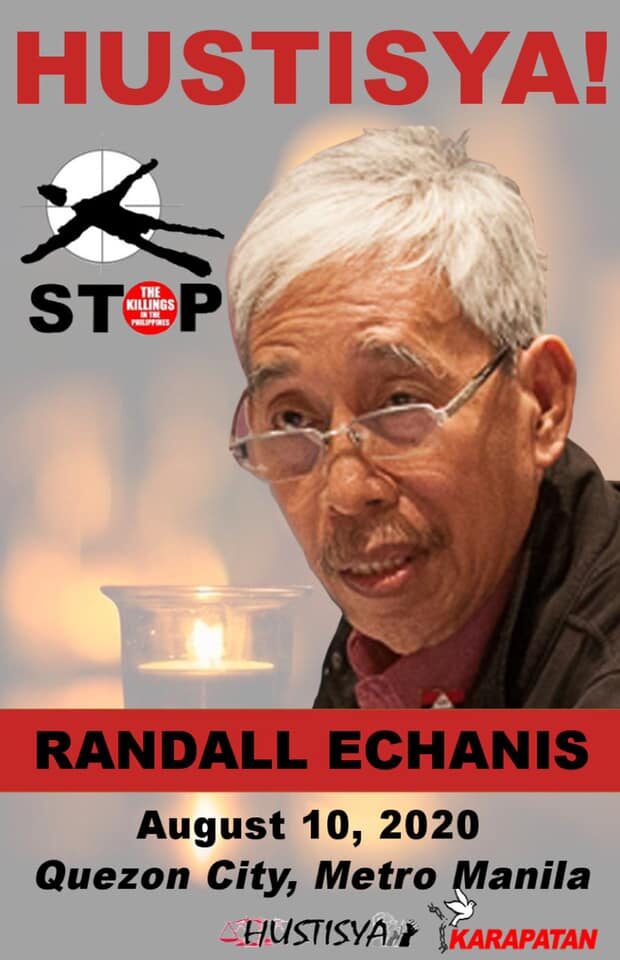