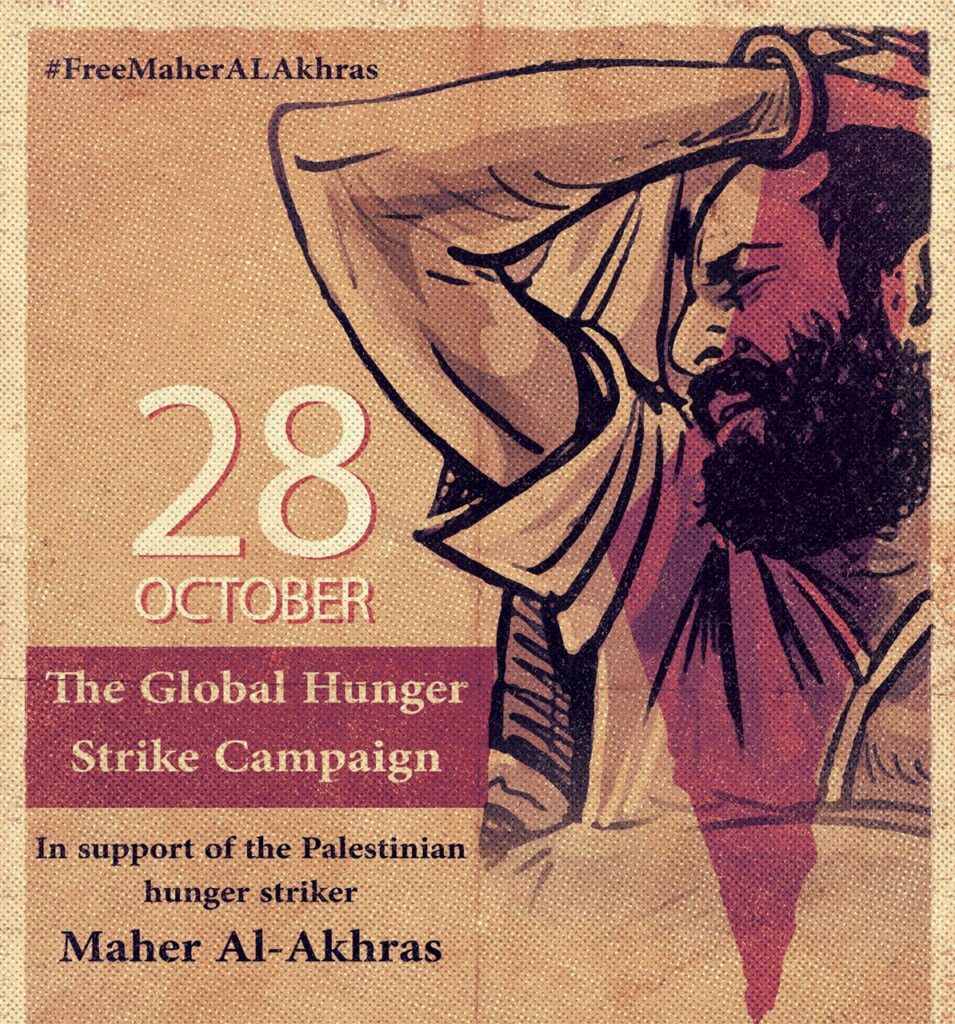 Irish activists announced a solidarity hunger strike to support Maher al-Akhras, part of the global one-day hunger strike campaign to demand freedom for the Palestinian prisoner on hunger strike for 94 days. Maher al-Akhras is jailed without charge or trial under Israeli administrative detention, and the father of six launched his hunger strike in order to demand his immediate release. His medical situation has become increasingly dire, even as Israeli occupation forces have stepped up the level of repression against him.

Samidoun Palestinian Prisoner Solidarity Network is joining with the Global Campaign to Return to Palestine to call for a global day of action on 28 October in support of Maher al-Akhras, the Palestinian prisoner jailed without charge or trial now on his 92nd day of hunger strike.

“Palestinians continue to have our (Irish and Irish Republican) unconditional support and we will continue to take actions in solidarity with their cause which is just and is our cause too. Victory to all the prisoners in Palestine and victory to the hunger strike!” said Michael Butler of The Red Nation and Samidoun, one of the participants in the rolling hunger strike.

Irish organizer Patrick Murphy of Anti Internment Munster announced the strike and organized a group of Irish republican activists from different counties in Ireland to host a 10 day fast in solidarity with Maher Al Akhras on his hunger strike. The strike announcement follows:

“Tomorrow the 28 October we join activists around the world in support of Maher al-Akhras, the Palestinian prisoner jailed without charge or trial now on his 93rd day of hunger strike.

From tomorrow night 9pm, I will start a 24hr fast followed each day by another volunteer for 10 days to show solidarity with Maher and his family and to raise awareness to his hungerstrike

The hunger strike is an individual and collective tool used by Palestinian and Irish prisoners, putting their bodies and lives on the line in the struggle for freedom.

There is a long history of mutual solidarity between Irish and Palestinian organizers against colonialism and political prisoners; both have used hunger strikes to defend their rights and expressed support to one another during these hunger strikes. Samidoun Palestinian Prisoner Solidarity Network salutes these Irish activists for their important and meaningful solidarity with Maher al-Akhras. Freedom for all Palestinian and Irish political prisoners – freedom for Palestine and Ireland!