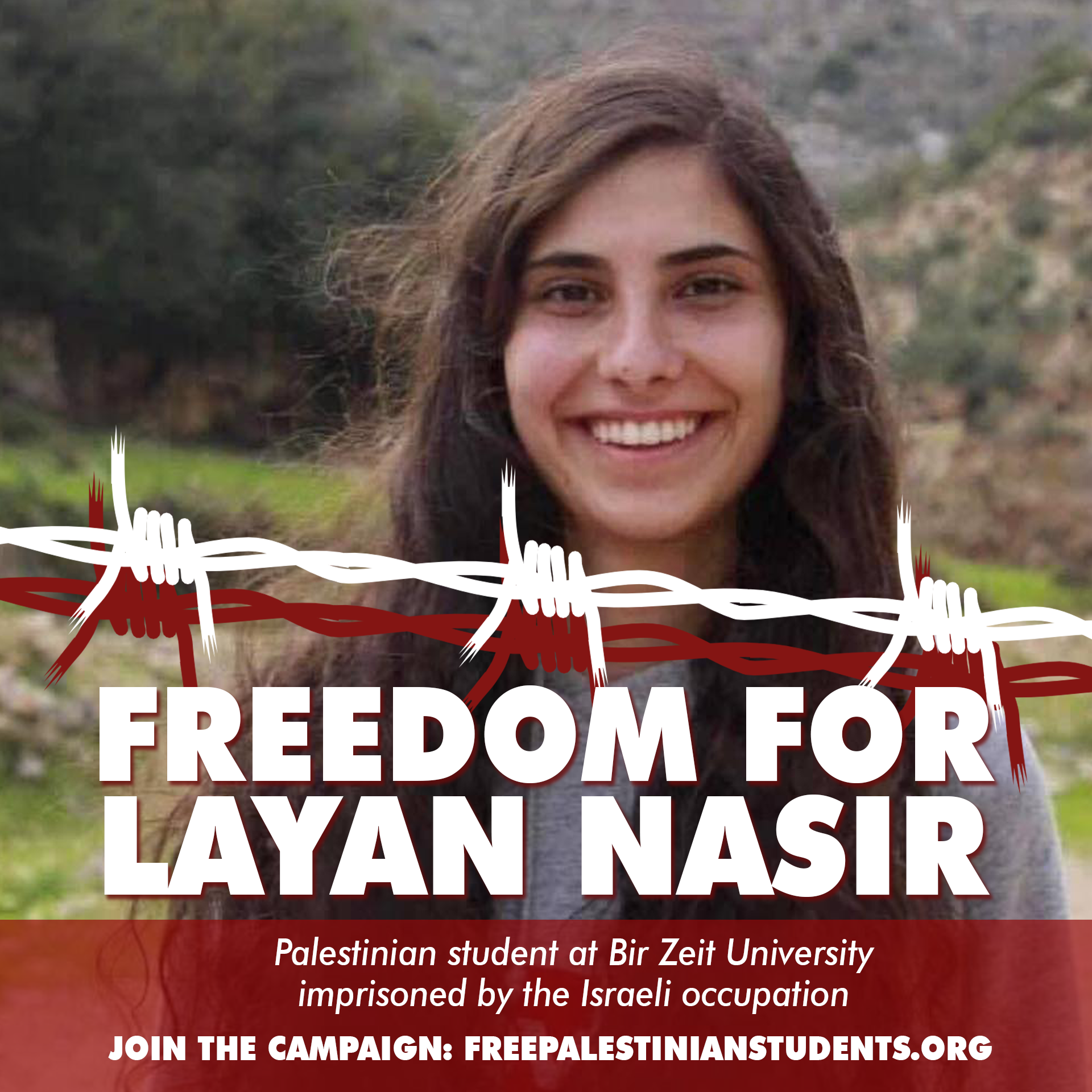 She will be brought once again before an Israeli military court at Ofer prison on 24 August, where she is accused of “membership in an illegal organization,” in this case, the Progressive Democratic Student Pole, the leftist student bloc at Bir Zeit University. These arbitrary designations of Palestinian organizations as “unlawful” may be issued at any time by an Israeli military commander of occupation forces in the West Bank, and are used as a pretext to round up, detain and violently attack Palestinian organizations and movements.

There are currently hundreds of Palestinian students detained by the Israeli occupation. At Bir Zeit University alone, Nasir’s university, approximately 74 students were detained by occupation soldiers during the 2019-2020 academic year. Students are routinely and specifically targeted for Israeli colonial imprisonment and repression for their student activism, organizing student events and participation in student elections and other political and social activities on campus.  Earlier in July, a UN panel declared that the imprisonment of Palestinian students Layan Kayed, Ruba Assi and Elia Abu Hijleh was unlawful and arbitrary, calling for their release.

Support for the Palestinian civilian population and its students: free Layan Nasir!

The last Israeli attack on Gaza last May was met by the solidarity mobilization and unwavering unity of the Palestinian civilian populations of the West Bank and Israel. The extremely widely supported general strike demonstrated the power of trade union organizations in a situation of generalized crisis.

Following the ceasefire, the Israeli army has been conducting an offensive for several months against these organizations and the activists it considers the most effective. The result is several hundred arbitrary violent arrests, detentions, dissolutions of organizations, closures of premises, theft of computer equipment, etc.

For decades, the youth and students who contribute to popular resistance against the apartheid Israeli regime have been a prime target of attempts to silence them. Student organizations are particularly targeted, and dozens of students have been arbitrarily arrested, assaulted and detained.

The case of Layan Nasir, 21, a fourth-year student in nutrition studies at Bir Zeit University in the occupied West Bank, is emblematic. Her house was stormed by the Israeli army on 7 July 2021. Layan Nassir was then handcuffed, a mask covering her eyes, another her mouth, arrested and transported to the Ofer military camp for interrogation, then transferred to HaSharon Prison where she is still incarcerated.

The charges against Layan relate mainly to her alleged membership of a left-wing student organization (the Democratic Progressive Student Pole) which the IDF has declared illegal, as it does for all student organizations, a practice denounced by Palestinian human rights organizations. The Ofer Military Court has scheduled a new hearing for Layan Nasir on 24 August 2021.

Faced with this obvious denial of freedom of association, freedom of expression expression and the right to form student unions, we demand the immediate and unconditional release of Layan Nasir, as well as dozens of detained students. for similar reasons, such as the 45 Bir Zeit students arrested on July 14 after returning from a peaceful demonstration in support of the villagers of Turmus Ayya.