The following article is republished from the original French at Collectif Palestine Vaincra:

Between 8 to 14 November 2021, several members of the Collectif Palestine Vaincra, a member organization of the Samidoun Network, traveled to Lebanon to accompany the Lebanese premiere and tour of “Fedayin: Georges Abdallah’s Fight,” organized with Collectif Vacarme(s) Films and the Lebanese Campaign for the Liberation of Georges Abdallah. After previous delegations to Lebanon in 2019 and the Samidoun Brigade in 2021, this new trip made it possible for the Collectif to once again strengthen ties with Lebanese and Palestinian partners. On Monday, 8 November, the Collectif visited the Palestinian Chess Club in the Shatila Palestinian refugee camp in Beirut. This independent community organization offers a social and educational framework to over 70 children. Founded in 2013, the chess club is led by Palestinian children and youth, who constitute a general assembly that makes decisions for the center. They are supported by the coordinator of the Chess Club, Mahmoud al-Hanoun, a Palestinian leftist activist. The Chess Club takes inspiration from the ideas and vision of Palestinian and Lebanese revolutionaries like George Habash and Georges Abdallah, whose portraits are prominently displayed in the Club. The day continued with a visit to the cemetery of the martyrs of the Palestinian revolution, which pays homage to the thousands of people who gave their lives for Palestine, whether Palestinian, Arab or international. Important political figures are buried there, such as Ghassan Kanafani and Maher Al-Yamani. In the afternoon, delegates met with different members of Palestinian and Lebanese organizations, including the Popular Front for the Liberation of Palestine, the Nasserite People’s Organization, the Lebanese Communist Party, the Campaign to Boycott Supporters of “Israel” in Lebanon and the Youth Movement for Change. 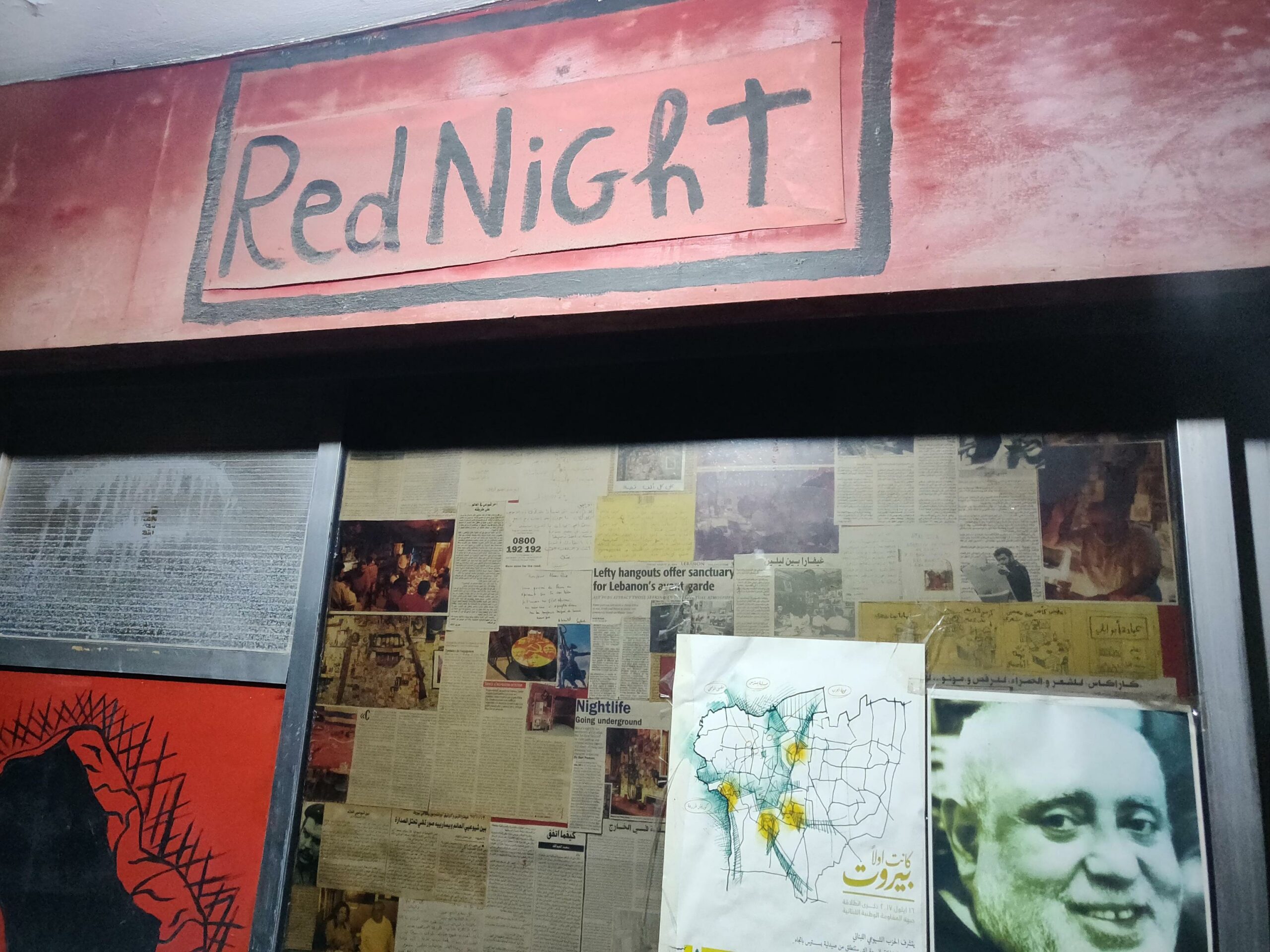 The discussion addressed the campaign to support Georges Abdallah in Lebanon as well as the economic crisis, the dire situation of Palestinian refugees and regional policies in regard to the Zionist occupation. The delegates ended the first day in a bar called Red Night, run by former members of Jammoul, with decorations that pay homage to the long history of resistance to imperialism and Zionism. On Tuesday, 9 November, the front page of the Lebanese newspaper, Al-Akhbar, was dedicated to a complete report on Georges Abdallah. The issue included an article by the Collectif Palestine Vaincra as well as an interview with Collectif Vacarme(s) Films on “Fedayin: Georges Abdallah’s Fight” and an article by Robert Abdallah about Said Bouamama’s book, “The Georges Ibrahim Abdallah Affair.” The day ended with the premiere of “Fedayin: Georges Abdallah’s Fight” in Lebanon, at the Al Madina Theater in Beirut’s Hamra district. Over 120 people participated in the event, which concluded with a discussion about the current situation of the mobilization to free the longest-held political prisoner in Europe, moderated by a representative of the film directors and Robert Abdallah, spokesperson of the Lebanese Campaign for the Liberation of Georges Abdallah.

On Wednesday, 10 November, the Lebanese tour continued in the city of Saida south of Beirut, a city with a long history of resistance to the Zionist invasion of Lebanon. The screening took place in the Maarouf Saad Center, named for a Lebanese Nasserist politician and supporter of Palestine, who died on 6 March 1975 from gunshot wounds sustained during a demonstration against a company’s attempt to monopolize the fishing industry and destroy the fishers’ labour organization. 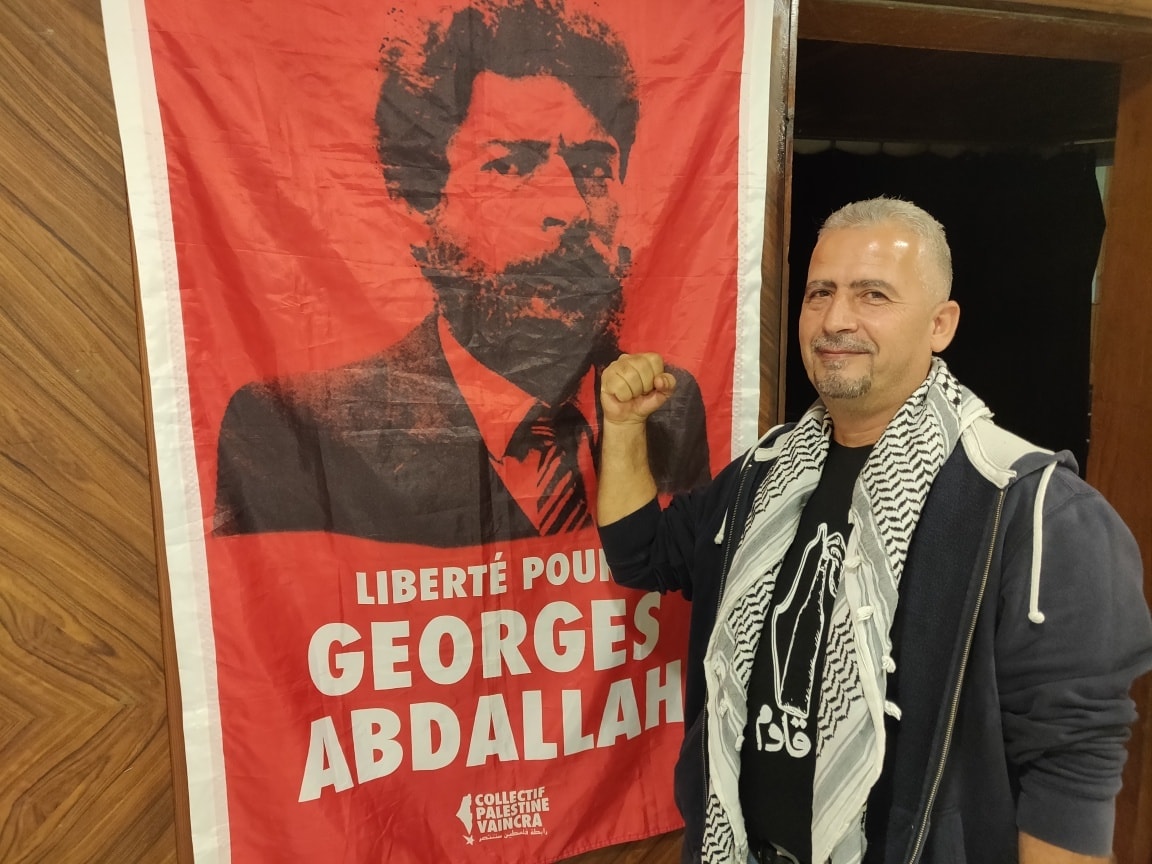 Anwar Yassin, Lebanese resistance icon and communist activist, jailed in the Israeli occupation prisons from 1987 through 2004, was present at the screening to reaffirm his support for Georges Abdallah. He was liberated as part of a prisoner exchange organized by Hezbollah after over 17 years in Israeli prisons following various operations against the Zionist occupation of southern Lebanon.

Al-Mayadeen television station reported on the event, which was also covered by Al-Akhbar newpaper.

The next day, the delegation traveled to Tripoli in the north of Lebanon, where the Popular Front for the Liberation of Palestine organized a rally in support of hunger striking Palestinian prisoners and Georges Abdallah outside the offices of the International Committee of the Red Cross. Several dozen people attended, including families from the Nahr el Bared Palestinian refugee camp. 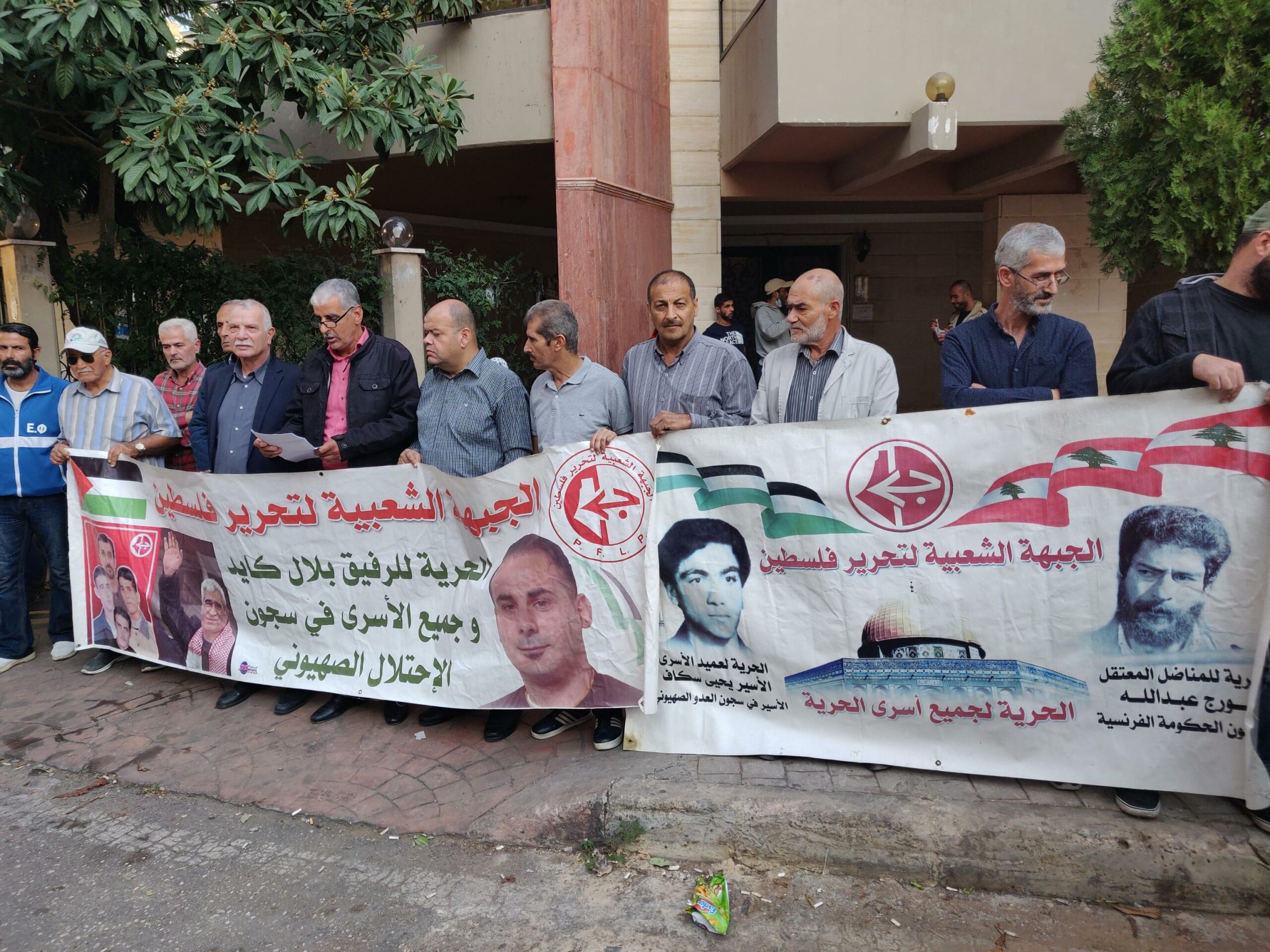 After the rally, a new screening of “Fedayin” brought over 170 people to a cinema in the heart of Tripoli. The film was introduced by Robert Abdallah, who spoke about the importance of the film in developing and intensifying the campaign to free the Lebanese Communist imprisoned in France since 1984.

On Friday, 12 November, the delegation returned to Shatila camp to meet the people of the camp, who live in extreme poverty. Around 27,000 people live in the camp, including 14,000 Palestinian refugees fighting for their right to return to their homes in Palestine, which they have been denied for over 73 years. The camp was established in 1948 by Palestinian refugees expelled from Palestine by occupying Zionist forces during the Nakba, and was also the site of the infamous 1982 massacre perpetrated by Israeli occupation and local reactionary forces. The Palestinian Chess Club organized a screening of “Fedayin,” bringing this historical documentary on Georges Abdallah and the Palestinian resistance to young people in Shatila. The event ended with a discussion of France’s role in the oppression of the Palestinian people and a dabkeh dance performed by the children of the Club.

Later on 12 November, the delegates visited Bourj al-Barajneh refugee camp; there, they visited the PFLP office and discussed the political and social situation in the camp and the prospects for Palestinian resistance in the region. They also visited the Al-Naqab Center, which organizes with Palestinian youth in the camp and is a partner of the Collectif and Samidoun as well as a participant in the Masar Badil. 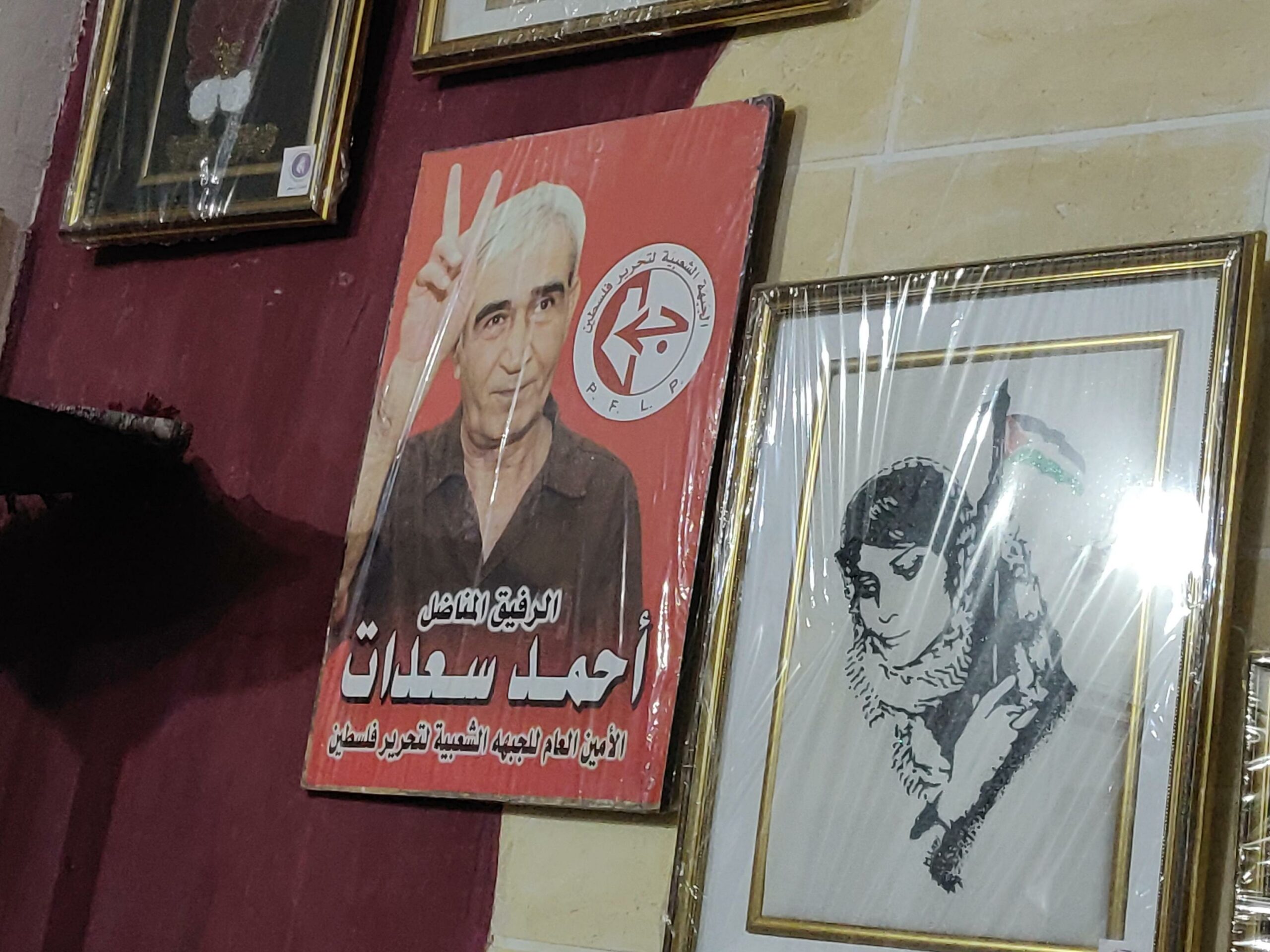 An open-air screening of “Fedayin” followed at the Rawdat al-Qassam stadium of the camp, which was attended by dozens of people, including several heads of Palestinian and Lebanese organizations. The evening concluded with a letter-writing session to Georges Abdallah, who has become a true symbol of anti-imperialism for the residents of the camp. The delegates visited the Social Solidarity Center, a long-time partner of the Collectif in developing joint activities to support the right to return of Palestinian refugees and the liberation of Palestine from the river to the sea.

The Center organized a screening of “Fedayin” which brought together dozens of people, including members of the PFLP and the Popular Committee of the camp, as well as many youth. The discussion was led by a member of the directing team and youth from the camp and ended with a letter-writing session for Georges Abdallah. Finally, a closing screening of “Fedayin” was organized by the Cine-Palestine Festival in a cultural cafe in Beirut, with the participation of Robert Abdallah, Anis Germany and Collectif Vacarme(s) Films. The delegation offered a meaningful opportunity to connect with the Lebanese Campaign for the Liberation of Georges Abdallah and to affirm collective commitment to develop the campaign for his freedom. The mobilization is entering an important stage in France by enlarging significantly, with over 1,000 people marching to Lannemezan prison where he is held on 23 October. This delegation aimed to strengthen the international and anti-imperialist dimension of the struggle to free the longest-held political prisoner in Europe.

“Fedayin: Georges Abdallah’s Fight” is available with appropriate subtitles in French, Arabic, English, German, Italian, Catalan and Castilian Spanish. If you want to show Fedayin in your area, email us at samidoun@samidoun.net and contact the directors at vacarmesfilms@gmail.com. We will help you to get your screening organized, and the directors are available to attend your events in person or to join your in-person events via video link.

Palestinian prisoners’ message to Samah Idriss: You are our comrade on the road to freedom