Late in the night on 4 January 2018, Nour Tamimi was released from Israeli prison, where she was met by her family. Her release followed an occupation military court’s rejection of an appeal of her earlier release order. She was released on bail and subject to a number of harsh conditions, including a requirement to report weekly on Fridays to an occupation police station as well as ongoing charges against her in occupation military courts for “assault” and interfering with the duties of a soldier.

Nour is the cousin of Ahed Tamimi, 16, and also a leader in the popular Palestinian resistance in the village of Nabi Saleh. Nabi Saleh, a village of 600 Palestinians, is surrounded by the illegal settlement of Halamish, which has stolen the village’s land and even its spring. The Tamimi family are leaders in the anti-colonial indigenous land and water defense struggle in Nabi Saleh, which reflects similar situations throughout occupied Palestine. Nour and Ahed were pictured in the same video confronting Israeli occupation soldiers on their land shortly after their cousin, Mohammed, 14, had been shot in the head by a rubber-coated metal bullet by occupation forces invading the village. In the video, Ahed slaps an occupation soldier after he slaps her and refuses to leave the family’s land.

Meanwhile, on 3 January, Manal Tamimi, who was seized by occupation soldiers outside the Ofer military court on Thursday, 29 December as she protested for freedom for Ahed, Nariman and Nour Tamimi, was released after nearly a week in Israeli occupation prisons.

The happiness at the release of Manal, however, was tempered by the sorrow and anger at the killing of 17-year-old Musaab Tamimi from the village of Deir Nizam, the “twin village” of Nabi Saleh. Musaab, a cousin of the Tamimis of Nabi Saleh, was shot dead with a bullet in his neck by an Israeli occupation sniper invading his village on the afternoon of 3 January, the first Palestinian life taken in 2018 by the occupation forces. Occupation forces attempted to justify the murder of Musaab by saying that he “appeared” to be holding a gun, but presented no pictures or evidence that any such gun existed. The use of the term “appeared” seems to be an admission by the Israeli occupation forces that they shot the boy as he protested their repeated invasions of his home village.

Ahed and her mother, Nariman Tamimi, remain imprisoned in HaSharon prison, both of them charged before military courts with a 99.74% conviction rate. Nariman is charged with “incitement” on social media for streaming Ahed’s encounter with occupation soldiers as well as her other political expresson on social media, and with “assaulting” soldiers, while Ahed faces 12 charges that could see her sentenced to years in prison.

Protests around the world are continuing to grow, demanding the immediate release of Ahed and Nariman Tamimi. In Paris, crowds marched through the city center on 4 January carrying signs and banners demanding freedom for Ahed and her fellow Palestinian child prisoners, who number over 300 out of a total of 6,200 Palestinian prisoners.

In Johannesburg, South Africa, students protested in solidarity with Ahed Tamimi and her fellow Palestinian prisoners in Nelson Mandela Square, calling for their immediate release. 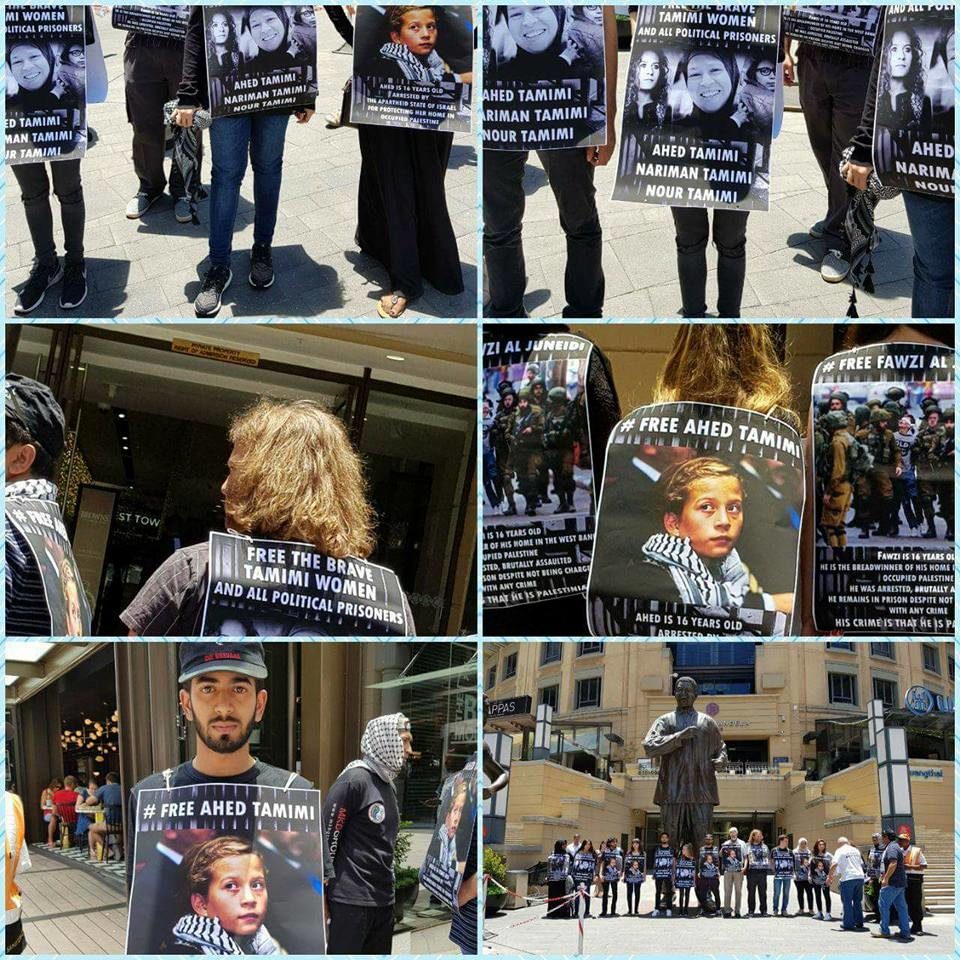 Inside Israeli prisons, prominent Palestinian leader Marwan Barghouthi issued a statement from Hadarim prison on the case of Ahed Tamimi:

“My pain is not confined to the child Ahed Tamimi, held in Israeli jails, but for all of her generation, the most courageous generation of Palestinians who are a model of sacrifice and confrontation of the occupier. Like all of the children of the world in schools and universities, behind computers, in playgrounds, squares, libraries, swimming pools and clubs, they want to enjoy life, not to be thrown into dungeons and prisons….Ahed, I promise you and through you, all of the children of Palestine to continue the struggle for you…to achieve your freedom and dignity.”

Protests continue to be planned in a number of international cities in the coming days for the freedom of Ahed and Nariman Tamimi, including actions in New York City, Los Angeles, Glasgow, Manchester and Edinburgh.

Samidoun Palestinian Prisoner Solidarity Network denounces the ongoing imprisonment of Ahed and Nariman Tamimi, among over 500 Palestinians arrested by Israeli occupation forces following U.S. President Donald Trump’s declaration of recognition of Jerusalem as the capital of Israel. Issa Qaraqe of the Palestinian Prisoners Affairs Commission stated that approximately half of those detained, like Ahed, Abdul-Khalik Burnat and Fawzi al-Junaidi, are children. There are hundreds of Palestinian children jailed by Israel and frequently subject to beatings, abuse, and interrogations without parents or lawyers present in violation of the law. We urge people of conscience around the world to take action to demand freedom for Ahed and her fellow detained and jailed Palestinian children in occupation detention centers, interrogation centers and prisons – and for the Tamimi women and all detained and imprisoned Palestinians.