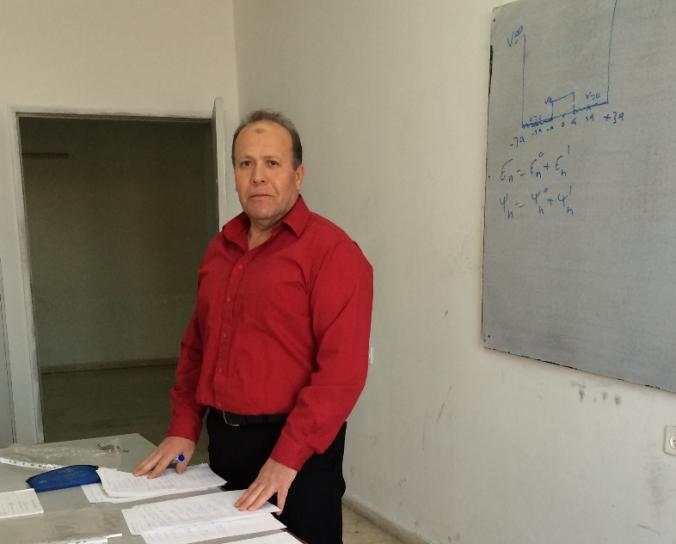 Scientists for Palestine released the latest letter from imprisoned Palestinian academic Imad Barghouthi, an astrophysicist at Al-Quds University, on 12 September 2020. Barghouthi, who has been targeted on multiple occasions by Israeli occupation forces, has been detained since July; he is held at the same Ofer prison where multiple cases of COVID-19 have been reported – alongside fellow detained Palestinian researcher Ubai Aboudi, director of the Bisan Center for Research and Development.

Prof. Barghouthi was seized from an Israeli military checkpoint in occupied Palestine on 16 July and held for two weeks before being charged as a Palestinian civilian in Israeli military courts for “incitement,” for posting on Facebook. As Scientists for Palestine noted, “after thousands of scholars worldwide demanded Prof. Barghouthi to be freed from prison, his lawyer successfully argued for his release on bail which was granted by the judge on his case on September 2nd.”

Instead of allowing Barghouthi to be released on bail, Israeli occupation forces imposed an unlawful administrative detention order against him until 15 November, forcing him to remain jailed – despite the fact that he is still facing dubious charges in the military courts. Israeli military courts convict over 99% of the Palestinians brought before them.

Administrative detention, initially introduced to Palestine by the British colonial mandate and then adopted by the Israeli state, is used to jail Palestinians without charge or trial. Detention orders can be issued for up to six months at a time and are indefinitely renewable; Palestinians have been jailed for years at a time under these orders. In violation of international law, the Fourth Geneva Convention and Article 14 of the International Covenant on Civil and Political Rights, administrative detention orders are used routinely against Palestinians; Barghouthi is currently among approximately 400 Palestinians imprisoned under these arbitrary orders.

Speaking for Scientists for Palestine, Mario Martone, theoretical physicist, noted: “It is truly frightening that Israeli authorities can so arbitrarily harass a distinguished Palestinian colleague, using internationally recognized illegal practices. We need a strong response from the international scientific community!”

This is not the first time the scientist has been targeted. A former NASA employee who earned his Ph.D. at Utah State University, Barghouthi was previously held under administrative detention for two months in 2014 and was once again detained for six months in 2016. In both cases, his arrest sparked a strong response from the international scientific and academic community to demand his release.

1. Sign the petition organized by Scientists for Palestine to demand freedom for Prof. Imad Barghouthi, and share the petition on social media: https://actionnetwork.org/petitions/demand-an-end-to-the-harassment-of-palestinian-scientists-and-academics-and-an-immediate-release-of-prof-imad-barghouthi/

2. Support the academic boycott of Israel! Palestinians are routinely denied academic freedom, and Palestinian scholars and hundreds of students are targeted for arrest and imprisonment. Israeli academic institutions are deeply complicit in the structures of colonialism that deny Palestinian rights at all levels, from engaging in military research and development to training government officials. Learn more about the academic boycott at USACBI, BACBI, AURDIP and more.

On my current administrative detention

I’m writing this letter as I await the Israeli military occupation court to review the Israeli military commander’s decision to put me under administrative detention for four months. This order overruled a court decision to release me on bail, while I await yet another trial for exercising my internationally protected right of expressing my opinion on my social media. And my next appearance before the military judge/court will be a closed session, showing that even Israeli authorities are ashamed of these proceedings.

In the israeli military courts it doesn’t matter that I’m a professor of space physics, (e.g. https://scholar.google.com/citations?user=Uevcf_gAAAAJ&hl=), nor it matters that I’m 50 years old, father of five and grandfather of one lovely boy, nor that no Israeli professor would ever be convicted for expressing her/his public opinion on facebook! The only thing that matters in front of their courts is that I’m a Palestinian and I’m thus labeled, dehumanized, and stripped of my basic human rights. And with no fear by the israeli military apparatus of real persecution for what they are doing to me.

Dear colleagues, I ask you to take a few minutes of your time to act in support of Palestinians and against the illegal procedure of administrative detention with a post demanding the abolition of this practice, or a discussion with your students and colleagues on the fact that in today’s 21st century world, Palestinians professors are being held without trial.

I know justice will never be served as long as Palestinians remain under occupation, but I take courage and inspiration from the words of Desmond Tutu, “in a situation of injustice, if you remain neutral then you have chosen the side of the oppressor.”