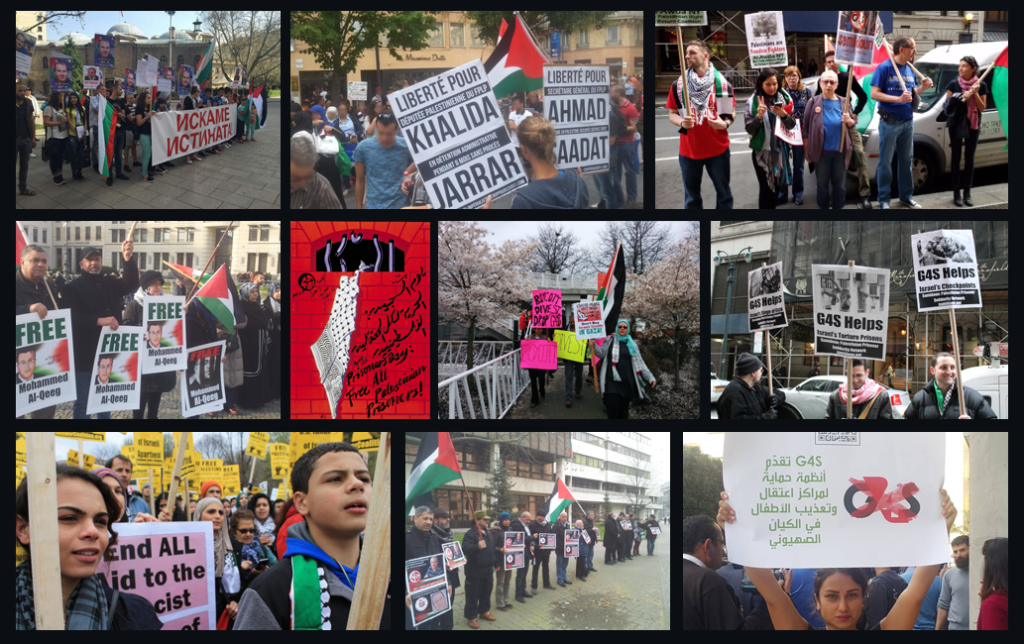 On 17 April each year, Palestinian prisoners, the Palestinian people, and the world mark the International Day of Solidarity with Palestinian Prisoners.

Commemorated since 1974, when the first Palestinian prisoner, Mahmoud Hijazi, was freed in a prisoner exchange with the Palestinian Resistance, 17 April is a day of protests, rallies, marches, forums and more to commemorate the struggle of Palestinians imprisoned in Israeli occupation jails and demand their freedom.

We join with the Palestinian prisoners’ movement in calling on organizations and people of conscience around the world to take action on 17 April to express your solidarity and call for freedom for Palestinian political prisoners.

International action has seen some response: G4S, the British-Danish security corporation targeted for a global boycott because of its role in providing security systems, control rooms and equipment to Israeli prisons, has announced it is selling off its Israeli subsidiary and leaving the market entirely. However, it’s critical to keep the pressure on G4S until their equipment and security systems are no longer being used to imprison Palestinians, block their movement at checkpoints, or besiege Gaza.

G4S doesn’t only profit on the imprisonment of Palestinians, of course. Black student movements at Columbia University, the University of California and Cornell University have led in building campus boycotts and divestment against G4S because of its role in private imprisonment in the United States, especially of youth, and have won significant victories. Organizing with movements confronting imprisonment and racist oppression, including the Black movement and the prison divestment movement, is particularly crucial in confronting common oppressors; the Black4Palestine statement identified G4S as a strong common target for struggle. Confronting racism and oppression of all forms comes hand in hand with confronting Zionist settler-colonial racism in Palestine.

Send your events to samidoun@samidoun.net or link them to Samidoun on Facebook, or tweet us at @SamidounPP.

Some events already happening for Prisoners’ Day include: